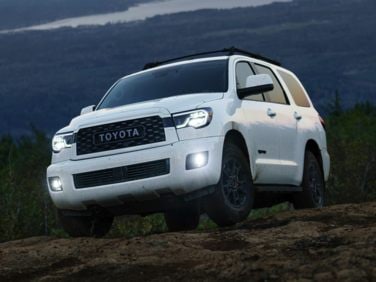 All About Toyota Sequoia

The Toyota Sequoia is a four-door, eight passenger full-size SUV. While Toyota have for years relied on the Land Cruiser to represent the company in the full-size sport utility market, it became clear at the end of the 1990’s that a portion American buyers were looking for more luxury than off-road ability when it came to selecting an SUV. Based on the Tundra pickup, the Toyota Sequoia was born in 2001 with a clear mandate to target the Tahoes, Yukons and Expeditions of the world. The first generation Sequoia actually managed to out-size its domestic competition, although exterior styling was a bit more bland than brawn.

The Toyota Sequoia received a serious steroidal injection, boasting increases in both power and brutal good looks. The revised Sequoia is even more closely tied to the Tundra now in terms of exterior appearance, and the large SUV has become an imposing, handsome addition to Toyota dealer lots. A bold, upright grille is flanked by muscular front fenders, and the curved but firm lines of the truck run all the way back to the short rear overhang. Under the hood, the Sequoia has been granted a more powerful 4.7 liter V8 base engine which churns out 276 horsepower and 314 ft-lb of torque. Upgrading to the 5.7 liter engine significantly increases output to 361 horsepower and 401 ft-lb of torque. This is the same engine which is available in the Tundra, and it has received heaps of praise for its high-tech, efficient design. Both engines are considered Ultra Low Emission by the EPA, an impressive feat for a truck of this size. The smaller V8 is paired with a 5-speed automatic transmission, while the 5.7 liter gets the 6-speed auto from the pickup truck.

The SR5 and Limited trim levels provide heaps of equipment such as heated seats, climate controls for each of the vehicle’s three seating rows, parking sonar and a power-operated third row seat. However, it is the Platinum package, something new that Toyota has developed exclusively for the Sequoia, which really ups the ante. 20-inch wheels, heated and air conditioned seats, a backup camera and navigation round out some of the more luxurious items that come standard with this trim. The big V8 is also included. The Limited and Platinum packages have 4-wheel drive as an option, but the SR5 is rear-wheel drive only. Optional goodies include an available towing package, external appearance items such as a rear spoiler and fog lights, and even upgraded second-row bucket seats.

The Toyota Sequoia is exactly as large in person as it looks in photographs, and it provides loads of interior space, towing capacity and horsepower. Fuel economy for the 4x4 version is a terrible 13 miles per gallon in the city and 18 on the highway for the 5.7 liter (it’s actually worse with the smaller engine, due to the SUV’s weight), but that is the price to pay for such an enormous truck. This newest edition of the Sequoia seriously steps all over the turf long claimed by domestic manufacturers, and it does so with both style and power. The Sequoia is an excellent option for anyone needing one the best and largest SUV’s on the road today.