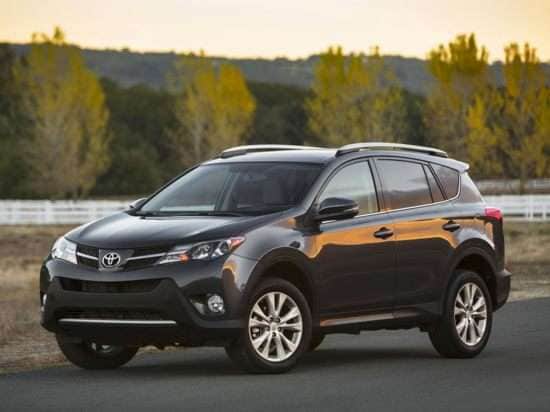 One of the pioneering names in the crossover segment enters its fourth generation with the debut of the 2013 Toyota RAV4, which has been completely redesigned for the new model year. Outside, a more dynamic and expressive look comes courtesy of bold character lines along the vehicle’s sides, as well as a more detailed grille. The 2013 Toyota RAV4 also switches from a side-hinged rear door to a more traditional liftgate. Then, in the driver-focused cabin, slim-back front seats provide added comfort to both the pilot and passengers alike. There’s also plenty of standard technology aboard the RAV4, from a multi-mode powertrain with six-speed transmission to a standard backup camera and Display Audio system.

(Note: The 2013 Toyota RAV4 EV puts an advanced all-electric propulsion system into an enhanced third-generation RAV4, and will be covered in its own summary.)

There are three trim levels available for the 2013 Toyota RAV4, all relying on the 2.5-liter 4-cylinder engine with a six-speed automatic transmission and Sport and Eco modes, and all available with Toyota’s new Dynamic Torque Control all-wheel-drive system.

The entry LE model also comes with a standard six-speaker Display Audio system with a USB port, Bluetooth audio-streaming technology, and a 6.1-inch touchscreen that integrates with a rearview camera, with the components ensconced in a soft-touch interior hosting fabric seats, a multi-function steering wheel, and eight airbags. You naturally get extra content with the 2013 Toyota RAV4 XLE, including an extra supportive driver’s seat with sport bolsters, dual-zone automatic climate control, fog lights, silver lower-grille highlights, a power moonroof and heated exterior mirrors.

The 2013 Toyota RAV4 Limited heats things up even further, thanks to heated front seats, while other cabin upgrades include a leather-trimmed steering wheel and shift lever, and SofTex-trimmed seating surfaces throughout. The Limited distinguishes itself with exterior enhancements as well, like automatic headlights, an adjustable power liftgate, roof rails and 18-inch wheels.

Nestled in the engine bay of the 2013 Toyota RAV4 is the automaker’s latest 2.5-liter 4-cylinder engine, with dual intelligent variable valve timing, and it’s mated to a new six-speed automatic transmission with Sport and Eco driving modes, allowing drivers to automatically fine-tune engine performance for either more athleticism or more efficiency. The new transmission boasts a new lockup-control torque converter, too; while the previous unit in the 2012 RAV4 engaged at about 25 mph, the 2013 model begins reaping efficiency and refinement benefits from the system beginning at roughly 12 mph.

And speaking of torque, the enhanced Dynamic Torque Control all-wheel-drive technology is available on all members of the 2013 Toyota RAV4 family to help optimize torque distribution in different driving scenarios.

Also, the 2013 Toyota RAV4 is no longer available with a V6 engine.

The 2013 Toyota RAV4 has secured its status as a Top Safety Pick of the Insurance Institute for Highway Safety (IIHS), but it has not yet been evaluated in the Institute’s new small-overlap test for the enhanced Top Safety Pick+ rating. In scoring 4 stars for occupant protection in frontal and rollover crashes, and 5 stars for side-crash protection, the 2013 RAV4 was awarded a 4-star overall score from the National Highway Traffic Safety Administration (NHTSA).

Along with its previously mentioned tech benefits ranging from a power liftgate to standard Bluetooth functionality, the 2013 Toyota RAV4 also offers advanced technologies like: