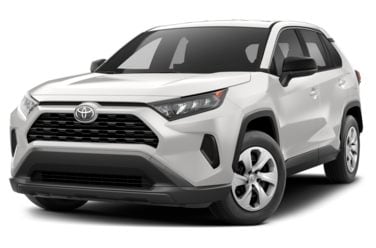 All About Toyota RAV4

The Toyota RAV4 is a four-door, up to seven passenger compact sport utility vehicle. The Toyota RAV4 was one of the first ‘cute-utes’, the wave of small, car-like sport utility vehicles that washed up on North American shores in the middle of the 1990’s. Along with the Honda CR-V, the RAV4 has been one of the stalwarts of the segment. The name ‘RAV4’ is actually an acronym for ‘Recreational Active Vehicle’, with the ‘4’ representing 4-wheel drive. Toyota created the SUV as one of its experimental ‘lifestyle’ vehicles, with the idea being that there was a market out there consisting of people who required occasional off-roading in order to accommodate their active, outdoors-oriented lifestyle.

The RAV4 has soldiered on through 3 major updates, with the most recent occurring in 2006. For 2008, the Toyota RAV4 remains on the new platform it received two years ago, and is largely unchanged with the exception of some added safety equipment in the form of extra airbags. The re-design has proven extremely popular, and has helped to make this small SUV the best-selling utility vehicle in Toyota’s American lineup. The vehicle is available with two engine choices. The first is a 2.4 liter 4-cylinder engine which produces 166 horsepower. The second is a much more powerful 269 horsepower V6, a 3.5 liter unit which is very similar to the engine found in the larger Toyota Highlander. Both of these motors are fitted with automatic transmissions, and the V6 benefits from an extra gear, making 5 in total.

Other features of note when it comes to the RAV4’s three trim levels, (base, Sport and Limited – also like the Highlander), are standard air conditioning, power windows, tinted rear glass and optional 4-wheel drive. A third row seat can be fitted to the vehicle, although its short wheelbase essentially limits comfortable travel in that location to only the very small. The Sport version of the SUV has a stiffer suspension and larger wheels, while the Limited trim improves interior appointments across the board, adding a splash of chrome on the outside along with special alloy wheels. A number of trim-specific options are also available for each level. The vehicle’s interior is comfortable and reasonably roomy, although it is probably better to leave the third row seat behind and make better use of that area for increased cargo capacity.

The RAV4 enjoys larger dimensions than the previous generation, and this translates into a more nimble and controlled driving experience. The available V6 provides more power than any other competitor, although this is delivered with an appreciable amount of torque steer. The 4-wheel drive offered in the RAV4 is not designed for extended forays into the wilderness, seeing as it is a part-time system intended to respond more to on-road losses in traction than deep mud or mountain streams. However, Downhill Assist Control is available, which takes the white-knuckle aspect out of descending a steep hill.

While the cute-ute may have chunked up over the years due to safety equipment and increased luxury options, the 3,500 lb RAV4 still manages to squeeze out decent, if not amazing fuel mileage. The 4-cylinder and the V6 are within 2 miles per gallon of each other in city driving at 25, and both deliver 27 miles per gallon in highway motoring. The 4-wheel drive RAV4 boasts slightly worse fuel consumption. The RAV4 still makes a good option for anyone who wants a little bit of slippery road security without having to step into a full-size truck or SUV.