Almost a decade ago, Toyota introduced an electric version of their RAV4 compact SUV that companies could lease to do their errands. Fast forward to today and Toyota has unveiled a new RAV4 EV that’s available to the general public. The new RAV4 EV comes from a partnership from Toyota and electric car manufacturer, Tesla. Toyota provides the RAV4 while Tesla handles the powertrain.

Powering the RAV4 EV is a electric motor that produces 154 horsepower and 273 pound-feet of torque. That is mated to a one-speed automatic transmission to the front wheels. The run to 60 MPH takes about 8.6 seconds when the RAV4 EV is in the normal mode or 7 seconds in the sport mode. Total range for the RAV4 EV is about 100 miles and it can be recharged in six hours when plugged into a 240V charger.

Outside, Toyota redesigned certain parts of the RAV4 EV including a front bumper, upper and lower grill, and spoiler to help improve the aerodynamics. Toyota says the RAV4 EV is the most aerodynamic SUV on the road with a drag coefficient of 0.30 cd. Inside, the RAV4 EV is mostly the same as the RAV4 aside from a new gauge cluster and  7-inch color touch screen display.

The RAV4 EV carries a price tag of $49,800 and will be available in certain markets in California; Sacramento, the San Francisco Bay Area, Los Angeles/Orange County and San Diego. The RAV4 EV competes with the Ford C-Max Energi and Toyota Prius V. 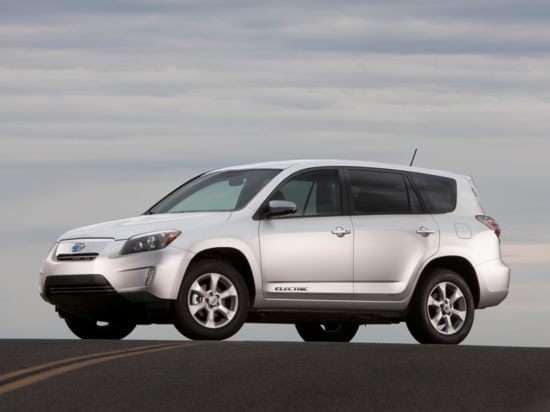