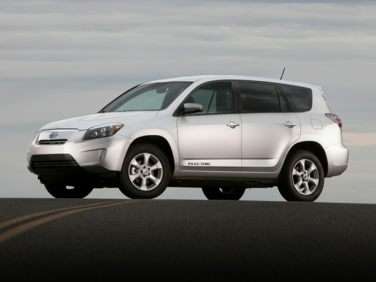 All About Toyota Rav4 EV

The Toyota RAV4 EV is the all-electric version of the company’s small crossover SUV. And while there is currently a model of the RAV4 developed in conjunction with Tesla Motors on offer, the first Toyota RAV4 actually made its appearance back in 1997 as a limited production model. Offered on a lease-only basis from 1997 to 2003, at the end of the lease term Toyota actually allowed some customers to purchase the vehicles outright—thus a few of those original RAV4 EVs are still on the road.

Toyota’s engineers basically replaced the gasoline combustion engine and transmission of the standard RAV4 of the time with a 70 horsepower electric motor and a one-speed automatic transmission configured to route power to the front wheels. It featured power brakes, power steering, and air conditioning. However instead of hydraulic operation, the pumps and motors for these devices were electrically powered. Other than that, the original RAV4 EV was mechanically identical to its gasoline counterpart.

The original RAV4 EV boasted a range of up to 120 miles from its 95 amp-hour Nickel Metal Hydride (NiMH) battery pack, which charged inductively and had a capacity of 27 kWh. A full recharge took approximately five hours using a wall-mounted 6000-watt charging unit fed by a 220 volt, 30-amp electrical outlet.

For the 2012 model year, Toyota reintroduced the RAV4 EV, as we said before developed in conjunction with Tesla Motors. The GEN2 RAV4 EV uses the same 115 kW induction motor Tesla employs in its Model S sedan. Producing the equivalent of 154 horsepower in this application, the motor offers two drive modes, Normal and Sport. Acceleration, as you might expect, is more aggressive in the Sport mode, as is top speed. Terminal velocity is 85 miles per hour in Normal and 100 miles per hour in Sport.

The battery pack uses some 4,500 lithium-ion cells and has a capacity of 41.8 kWh of usable charge. Its range is quoted at 103 miles, and full recharge can be accomplished in as little as five hours with the optional 240-volt home charging system. Recharging from a standard 120v outlet can take at minimum 44 hours. The battery pack is warranted for eight years or 100,000 miles. It is important to note, while the RAV4 was completely redesigned for the 2013 model year, the RAV4 EV uses the previous RAV4 model’s platform. As this is written (November 2013), Toyota is only offering the RAV4 EV in California.