With a car as influential as the Toyota Prius, there is no need to wax poetic. This car set the industry standard for hybrids, and each year it continues to sell well based on its exceptional fuel economy. (That trusty Toyota badge helps as well.)

Although it’s a practical and trustworthy vehicle, it’s not exactly exciting. However, the 2017 Toyota Prius, in its second year since a major redesign, really surprised us during its week-long Autobytel test drive. We found the 2017 Prius to be improved by leaps and bounds compared to its previous generations. With a better drive experience, improved interior finishes, and upgraded tech, this Prius is the best yet.

It’s hard to differentiate between the models unless you’re comparing window stickers. But one Prius that stands slightly outside the group is the Prius Two Eco; with slightly better EPA estimates than the other five models in the lineup (58 mpg city/53 mpg highway vs. 54/50), the Eco has small aerodynamic enhancements (like a smooth underbelly) and lighter weight to be as efficient as possible.

Don’t judge a book by its cover.

Don’t judge a book by its cover.

We have lots of positive things to say about the 2017 Toyota Prius, and in almost every way we find this current version better than the last—except when it comes to its exterior design. To be frank, we are not fans of the current Prius design. While the Prius retains its aerodynamic teardrop shape, we find its more severe design language (especially toward the rear of the car) to be awkward and unappealing. Some folks find the car unattractive; others find it completely inoffensive.

The trademark design features of the current Prius are more chiseled and less bubbly than those of the previous model, and its zig-zag LED taillights are supposed to make the Prius stand out from the crowd. Despite these aesthetic challenges, we advise you to keep an open mind and just get inside the Prius—it’s much better in there.

The new generation of the Toyota Prius has drastically changed inside. Our Prius Four Touring had shiny space-age white finishes that replaced most of the dull gray and bland beige hard plastic found in the old models. We were impressed by how much more comfortable the seats were and we liked the soft-touch feel of the dashboard. We won’t call the interior luxurious, but it felt so much more modern and upscale than the old Prius.

The Prius on the Road

The Prius on the Road

This being a Prius, we expected a less-than-thrilling driving experience, along with a harsh ride and sloppy handling. But those descriptions do not apply to the 2017 Toyota Prius—at all. Frankly, we were shocked by just how much better it is to drive than the last Prius. It has a very tight and solid structure, and it rides like a more expensive car, smothering road imperfections that would have jarred occupants of the last Prius. It’s much quieter, too. Round a corner and it’s impossible not to be impressed by the response, grip (with our tester’s 17-inch wheels, anyway), and precise steering. No Prius has ever handled like this one.

The powertrain still feels vintage Prius, though. Still using a 1.8-liter 4-cylinder gasoline engine paired to an electric powertrain, this latest Prius has been heavily revised for better fuel economy and generates a very modest 121 horsepower. Acceleration still feels a bit sluggish whether from a start or while passing, and the engine often sounds like it’s working overtime. It’s just the price you pay for that incredible fuel economy.

Does the Prius still get the best fuel economy?

Does the Prius still get the best fuel economy?

It’s no secret that getting great gas mileage is the primary reason buyers choose a Toyota Prius. Our top-of-the-line Prius Four Touring test car was rated at 54 mpg city/50 mpg highway/52 mpg combined. (The last Prius was rated by the EPA at 50 mpg combined). There is also the previously mentioned Prius Eco model, which is rated at a stellar 58/53/56.

The Prius’ fuel economy stats are still quite impressive, but for the first time, shoppers looking for extreme fuel economy have some alternatives to consider. The brand new Hyundai Ioniq is rated at up to 58 mpg, and even the new Kia Niro hybrid crossover is rated at 50 mpg. For maximum fuel economy, the Prius has long been the only game in town, but today this Toyota hybrid has got some stiff competition.

If you haven’t been shopping for a Prius before, you might not be aware of the most efficient Prius of all: the all-new Prius Prime. The Toyota Prius Prime is a plug-in hybrid, which means you have all the benefits of an electric vehicle, without the range anxiety that comes along with it. After its electric charge has run out, the Prius Prime functions just like the regular hybrid does—combining gasoline and electric power. The plug-in hybrid is a great choice for drivers with shorter commutes; it has a 25-mile all-electric range before transitioning to the usual hybrid powertrain that yields 55 mpg city/53 mpg highway. If you can get away with driving short distances using only the electric range, you’ll save even more when it comes to fuel costs.

Those old-school, dot matrix, Atari-screen looking "green cars” are all in the past—the current generation of Prius keeps things modern with updated tech features throughout the cabin. Not only does it come standard with Toyota’s Entune system, it offers Qi-compatible wireless charging for your smartphone up front and customizable full-color displays in the dash so you can choose what information you’d like to see during your drive. Our test Prius had Entune Premium Audio, which comes with navigation and an app suite. Apps like Pandora, MoveTickets.com, Open Table, and Yelp are all available; while the system is very user-friendly and a cinch to use, we still missed our Apple CarPlay.

We also think the tech driving aids available with the Prius are worthy of a shout-out. We like that a full-color head-up display is an available option on Prius Four models, and we also think Toyota’s Intelligent Parking Assist is an impressive feature for a vehicle from a non-luxury brand.

In addition to its fuel economy, the Prius has equal appeal when it comes to safety. All Prius models come standard with Toyota Safety Sense (TSS), a suite of advanced technologies that assist the driver on the road. TSS includes a Pre-Collision System, which automatically brakes on behalf of the driver should the vehicle detect a collision; Pedestrian Detection, which does the same if a person is detected in the path of the vehicle; Lane-Departure Alert and Steering Assist, which helps the Prius stay in its lane; and Dynamic Radar Cruise Control, which allows the driver to set a maximum speed, and then automatically accelerates and slows (or brakes) to maintain a safe distance from the vehicle in front of it. The 2017 Toyota Prius was also recently named a Top Safety Pick+ by the Insurance Institute for Highway Safety (IIHS).

The Toyota Prius is the most popular hybrid for a reason—with great fuel economy, advanced safety features, a modern interior, and a reputation for reliability, it simply checks all the boxes. We at Autobytel were thoroughly impressed by the Prius during our test drive, and we can say without hesitation that we enjoyed our time with it. Sure, the newest version of Toyota's classic hybrid may look a little funny, but this new Prius remains a smart choice for almost any type of buyer. Commuters, families, professionals and weekend warriors alike will all find lots to love about this renowned hybrid—we certainly did. 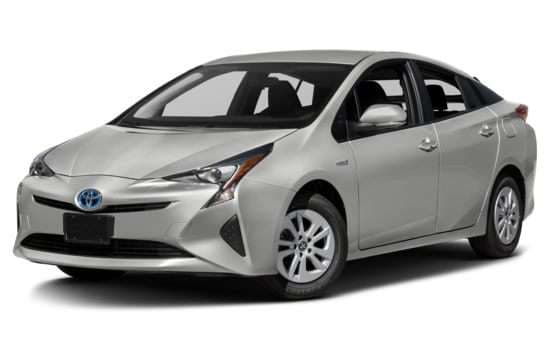