Toyota’s hybrid game is strong. The company’s spent the last few years building out the Prius lineup with additional models—at this point, the Prius is basically its own fully fleshed out sub-brand, with several available body styles to give buyers a little more versatility.

Now that the Prius family has been fully established, it’s time to get back to basics. For 2016, Toyota has graced the original Prius with some much-needed attention, giving the compact hybrid hatch a full redesign. It’s more efficient than its predecessor, arguably more attractive, and definitely more comfortable.

We drove a 2016 Toyota Prius Four Touring and think that Toyota has succeeded in making an even better mainstream hybrid car for the masses.

The 2016 Toyota Prius has an entry-level MSRP of $24,200, making it one of the least expensive small or midsize hybrid cars on the market. It’s undercut only by the Ford C-Max Hybrid, the Honda CR-Z, and Toyota’s own Prius c.

The base Prius trim level is called the Two. The Prius Three starts at $26,250, and the Prius Four starts at $28,650. We tested a Prius Four Touring ($30,000) with a special exterior finish ($395), a cargo net ($49), and various exterior trim pieces and accessories (about $550). After delivery fees, our test 2016 Toyota Prius Four Touring came to $31,827. This price is comparable to a well equipped midsize car such as the Ford Fusion Hybrid, Chevrolet Malibu Hybrid, or Toyota Camry Hybrid.

Most versions of the 2016 Prius are EPA-rated at 54 MPG city, 50 MPG highway, and 52 MPG combined, which is better than most of the competition. The Prius Two Eco model gets 58 MPG city and 53 MPG highway, thanks to a weight reduction and three driving modes: EV (which runs the vehicle on electric power for a short time), ECO (which maximizes fuel economy), and Power (which boosts acceleration). We left the Prius in regular mode, and fell far short of advertised fuel economy (more on that later).

Though the 2016 Toyota Prius feels underpowered in some situations, it feels great for city driving and perfectly adequate on the highway. All the while, we stayed conscious of the car’s ultimate objective—fuel savings.

Even though the 2016 Toyota Prius has a much smoother profile than the previous generation, it’s still best described as wedge shaped. That said, the wedge is nicely accentuated and features automatic bi-LED headlights, LED daytime running lights, and fog lamps. Our test car came in Hypersonic Red, a $395 option.

It’s hard to nitpick the Prius’ exterior design, seeing how far it’s come over the years and knowing that every detail is deliberate to improve efficiency. However, the rear spoiler is very awkward and significantly impairs the rear view out the new Prius. This was most evident at night when the spoiler would completely block the headlights of vehicles traveling behind me, making it difficult to determine the locations of surrounding traffic at a glance. While we can overlook design elements that are simply unattractive, it’s a lot harder to forgive ones that potentially impair safety in pursuit of added MPG.

The 2016 Toyota Prius Four Touring comes with SofTex faux leather front seats with heat and 8-way power adjustment for the driver. The front seats are comfortable and enabled good visibility to this 5-foot, 8-inch driver. Rear legroom and headroom are comfortable for a compact car. The Prius Four Touring offers 27.4 cubic feet of cargo space in the trunk, which is really good for a hybrid (although buyers should be aware that’s partly because upper trim levels come with a tire repair kit instead of a spare).

Premium trim levels of the 2016 Prius get a gloss-white interior trim on parts of the lower console and cup holder area. It’s supposed to look upscale, but it doesn’t flow with the rest of the interior. Our test car had only a few thousand miles on it, so the finish of this trim was still in good condition, but we shudder to think how it’ll look after a couple years of UV exposure and coffee spills.

Our 2016 Toyota Prius Four Touring was equipped with a 10-speaker JBL audio system, which provided good sound and was easy to control from both the touch screen and the steering wheel. Lower trim levels get a 6-speaker system. The Prius’ infotainment system (with a 7-inch touchscreen in our test car, and a 6.1-inch touchscreen in lower levels) has an easy learning curve and we quickly figured out the essential commands.

Overall, the Prius’ cockpit, is a little overwhelming. For such a small car, Toyota’s crammed a lot of stuff in there. In addition to the 7-inch touchscreen infotainment system on the Prius Four Touring, there are two 4.2-inch information displays (that show fuel economy and other such data) near the top of the dash. A tech-heavy cockpit looks upscale and appeals to a certain kind of buyer, and consumers may expect hybrids to be that way, but I wonder if it's too techy for the everyday buyer. The Prius Four Touring’s displays are easy and intuitive to use, but it’s a lot of information to take in and process, particularly in such a small area. There is a lot competing for the driver’s attention.

In addition to the tech mentioned above features, the 2016 Toyota Prius Four Touring came equipped with Bluetooth wireless integration, Siri Eyes Free, SiriusXM satellite radio, HD radio, and the Entune app suite. In addition to auxiliary and USB ports, the new Prius has a Qi-compatible wireless charging pad and a couple of 12-volt outlets, if you prefer to hook up your own hardware. The Prius is simple to get into and get comfy thanks to its smart proximity key. The auto-dimming rearview mirror with Homelink is a convenient touch. Two-tone 17-in. alloy wheels are standard on the 2016 Toyota Prius Four Touring.

The 2016 Toyota Prius nails the safety equation. It earns top marks in crash testing, with a 5-Star Overall rating from the NHTSA and a Top Safety Pick+ designation from the IIHS. Shoppers can consider this small car with confidence. The IIHS also gives the 2016 Prius a Good+ rating for the ease of use of its LATCH child seat anchors. Owners can install two child seats by using the rear side seating position, or one child seat can be installed in the rear middle seating position. The Prius is a little small to be truly competitive as a family car, but with its ability to easily and safely carry up to two small children, it gets the job done.

All models of the 2016 Toyota Prius come standard with a rearview camera. Our test car was also equipped with blind-spot monitoring with rear cross-traffic alert, and the Toyota Safety Sense system, which includes pre-collision warning with pedestrian detection, lane departure alert, and dynamic radar cruise control. The pre-collision warning, while nice to have, intervenes a bit too enthusiastically for our tastes.

Hybrid cars have been "gamifying" the fuel economy factor for years now, but we like the 2016 Prius’ straightforward approach. One of the dashboard’s smaller display screens is dedicated to a real-time readout of the car’s fuel economy, which provides encouragement without the overwrought animations of shrubbery and whatnot that dominated earlier hybrid models. It is exciting, in perhaps a childish sort of way, to glance up at the dash and realize that the car is rolling along—still at highway speeds—purely on electric power, thanks in part to its delicately detailed aerodynamics. That said, during a weekend afternoon of combined city and highway driving, our Prius test car came up well short of its 52-MPG EPA combined rating. After each trip, the display offered helpful suggestions to improve mileage that seemed counterintuitive to surviving in Chicago traffic. Even though the new Toyota Prius is designed to help you in every way possible, this hybrid, it seems, takes some practice.

With the 2016 Prius Four Touring, Toyota has succeeded in designing a more efficient yet more upscale version of its most well-known hybrid. Sure, there are plenty of other hybrid options in Toyota’s lineup (and amongst the competition) for people who still can’t wrap their minds around the Prius’ distinctive styling, but we think this redesign has the potential to convert new buyers to the Prius fold. The 2016 Prius still stands out, but its styling quirks are nowhere near as polarizing as those of Prius designs from the past.

Yes, the 2016 Toyota Prius has its drawbacks—the view-blocking rear spoiler, the garish and inexplicable white interior trim—but it’s still a nice option for a compact car, even if fuel efficiency isn’t at the top of your listy. In that way, Toyota has succeeded at making the Prius more mainstream. It should be compared against other compact cars at its price point, not just among other hybrids. 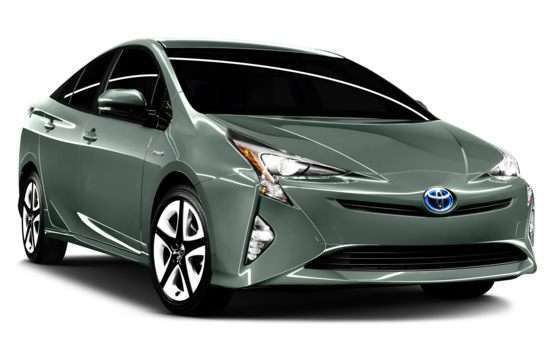