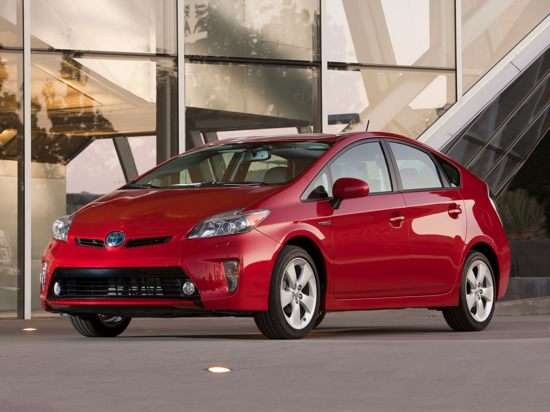 Changes for the 2013 Toyota Prius:

For the 2013 model year, the only change to the Toyota Prius lineup is the addition of a Persona Series Special Edition model, which adds 17-inch aluminum wheels, leatherette seats and steering wheel trim, and unique interior accents to the Prius Three trim level.

The 2013 Toyota Prius is a 5-passenger, 5-door midsize hatchback sold in two series: Prius, and Prius Plug-in. The Prius Plug-in model is discussed in a separate overview.

A full-hybrid powertrain is standard in the 2013 Prius, pairing a 1.8-liter 4-cylinder gasoline engine with an electric assist motor and a nickel-metal hydride battery pack. The Prius can accelerate to 25 mph on electricity alone, and when the gasoline engine is operating, delivers a combined 134 horsepower to the car’s front wheels through a continuously variable transmission (CVT).

According to the EPA, the 2013 Toyota Prius is expected to return 51 mpg in the city, 48 mpg on the highway, and 50 mpg in combined driving.

Toyota offers a Solar Roof Package with a solar-powered ventilation system and remote-controlled heating and air conditioning for the Prius Three model, as well as a navigation system, a reversing camera, and a free 3-year subscription to Toyota Entune services.

A heads-up display is optional for the Prius Four model, and this version can be upgraded with a Safety Connect telematics system that offers Automatic Collision Notification service. This feature activates if the car’s airbags deploy, putting occupants of the Prius in touch with a live operator who can contact emergency rescue personnel and send them to the car’s exact location.