With gas prices heading downward, so is the MSRP for one of the country's top hybrids, the versatile and roomy 2015 Toyota Prius v—at least a litte. As a result, pricing for the 2015 Toyota Prius v falls $75, to $26,675, yet owners enjoy freshened styling, with a nifty black accent for the lower grille, and a revised front fascia to complement the car's LED taillamps. The cabin for the entry model—"Grade Two"—also welcomes a new Entune Audio setup, complete with a 6.1-inch touchscreen (that also supports a standard rearview camera), six speakers, USB 2.0 and auxiliary inputs, and Bluetooth for audio streaming and hands-free calling.

Toyota also will launch its first Grade Four edition for the Prius v for 2015, providing owners with a significant seating upgrade: The front-row seats are both heated and trimmed in premium SofTex material, with the driver coddled in an eight-way power-adjustable throne; the front passenger seat offers a four-way adjustment range, and it also can be folded flat for additional cargo space.

Finally, topping the range will be the 2015 Toyota Prius v Five, which showcases the first single LED projector low- and high-beam headlights ever offered by the automaker. And while those are standard, the Prius v Five also sees an enhanced options list, with a reconfigured Advanced Technology Package that adds lane-departure alert to features such as JBL audio, Toyota's Dynamic Radar Cruise Control, a pre-collision system, automatic high beams, a panoramic moonroof (with power sunshades) and the Safety Connect automatic crash-notification technology. 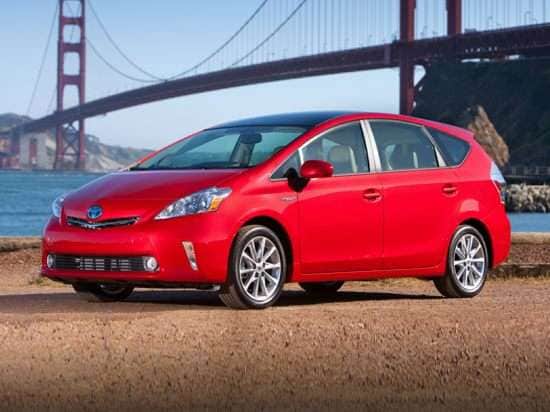