The Toyota Prius v is a four door five passenger hybrid that offers all of the amenities that made the original Prius so popular, except this time with a little extra space in the boot.  The plus sized Prius v is powered by a 1.8 Liter VVT-i four cylinder hybrid motor that generates a combined gas/electric 134 HP and 153 lb-ft of torque coupled with an electronically controlled Continuously Variable Transmission which returns an estimated 44 MPG in the city and up to 40 MPG on the highway.  Toyota offers the Prius v to the public in three trims: Two, Three and Five.

The entry level Prius v Two is adequately equipped with energy efficient features like a pair of projector beam halogen headlamps with automatic shut off, LED taillights, a rear spoiler with LED brake light and the obligatory Hybrid Synergy Drive blue accented badges.  Aside from that, the base Prius v rides on a set of 16 inch ten spoke wheels with covers and comes with color matching power folding heated side mirrors.  There is also UV reduction glass to protect passengers as well as aide the automatic climate control.  Prius v’s also come with power accessories, driver’s door Smart Key System and a cloth covered 60/40 split reclining rear bench.  Infotainment duties are handled by one of Toyota’s Display Audio systems that includes a 6.1 inch touch screen with integrated back up camera as well as six speaker AM/FM/CD/MP3 stereo with auxiliary input jack and USB with iPod connectivity as well as Bluetooth hands free telephone and wireless music streaming; starting at $26,400.

The next step up is the Prius v Three, which is similarly equipped to the Two from the outside; however the interior is upgraded with a tilt and telescoping steering wheel complete with climate, audio and Bluetooth hands free phone and voice command controls.  Other bonuses for the $27,165 Prius v include XM Satellite and HD Radio with iTunes tagging for the Display Audio system as well as Entune.  The Entune service includes Bing Microsoft search engine and Pandora internet audio streaming as well as real time traffic, weather, fuel and even stock prices through the infotainment system.

The top of the line Prius v Five starts at $29,990 and rides on a set of 17 inch rims.  The Prius v Five also gets a set of LED headlamps with auto level control for when the trunk is full and auto on/off switches to save energy as well as squirters to keep them looking clean and integrated fog lamps to help see the road ahead.  The optional Advanced Technology Package upgrades the Five with a Panoramic View Moonroof with power sliding sunshades, Premium HD Navigation with Entune centered around a seven inch touch screen display with integrated back up camera as well as eight JBL premium GreenEdge speakers with amplifier and safety connect which includes Emergency Assistance, Stolen Vehicle Locator, Roadside Assistance and Automatic Collision Notification as well as Toyota’s Pre Collision System and Advanced Parking Guidance Systems to help you make it to your destination safely and efficiently. 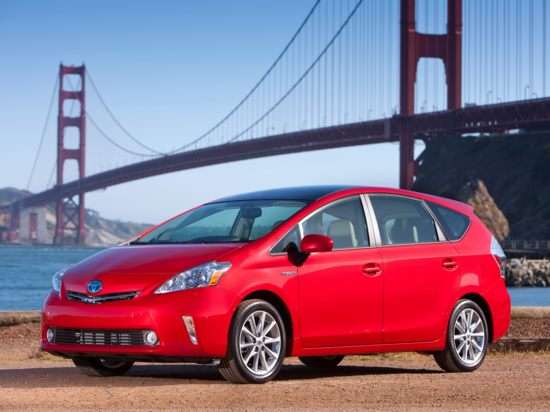