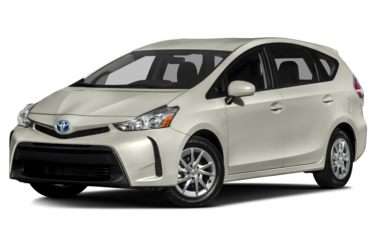 All About Toyota Prius v

The Toyota Prius v is a gasoline-electric hybrid hatchback produced by the Japanese automaker. It was introduced in January of 2011 at the North American International Auto Show in Detroit. The Prius v was the first extension of Toyota’s popular Prius nameplate, as the automaker began to introduce new models to develop the Prius lineup beyond the original compact hatchback that bore the Prius badge. The Prius v is larger than the original Prius hatch, and though it retains the familiar shape, it’s considered more of a compact wagon or MPV than a competitor to other compact and subcompact hybrids. Since the original compact Prius might be considered too small to be suitable for a family, Toyota planned the expansion to appeal to a broader demographic, especially families with children. The “v” in the name represents “versatility,” according to Toyota’s marketing team. The Prius v was released as a 2012 model year car, hitting the streets of Japan in early 2011, in the United States that fall, and in Europe in early 2012.

The United States version of the Prius v uses a nickel-metal hydride battery paired to a gasoline engine and an electric motor. (The Japanese version of the car offers both nickel-metal hydride and lithium-ion battery options.) The engine is a 1.8-liter inline-four borrowed from the original Prius, with a 60 kW motor. The engine yields 98 horsepower; the drivetrain components combined yield 134 horsepower. The Prius v uses the Hybrid Synergy Drive technology that is employed throughout the entire Toyota hybrid vehicle lineup. However, the Prius v also got some new drivetrain features, such as improvements to the engine cooling system and the exhaust recirculating system. These changes reduce the time needed to warm up the engine in cold weather, and help the car use waste heat more efficiently to keep the occupants of the car warm. The Prius v also has a special motor control that improves ride control and comfort on uneven road surfaces. The car also got suspension upgrades necessary to handle the vehicle’s larger footprint and heavier weight. The Prius v’s EPA fuel economy ratings are 44 mpg for city driving, 40 mpg on the highway, and 42 mpg combined. In addition to good fuel economy, the Prius v also emits about 66 percent fewer harmful emissions than the average new vehicle.

The exterior of the Prius v is an obvious derivation of the original Prius hatch, with the same angular, aerodynamic profile that yields a drag coefficient of 0.29, although some styling cues, such as a spoiler off the top of the hatch, are designed specifically for the Prius v. Despite the similarities between the Prius models, the Prius v boasts an improvement of about 50 percent more cargo space than the original, as well as more leg room and head room in the passenger cabin. In addition to the safety features that a family would expect, the cabin boasts features such as navigation, audio with Bluetooth integration, and a multimedia entertainment system.

A Prius v driver can fine-tune the driving experience with a choice of four operation modes picked up from the original Prius: normal, power, eco and EV. Many of the Prius v’s other standard operating features were also carried over, such as a smart key, push button start, hill start assist control, electronic shifting, and a rear camera for backing up. Options include parking assistance, dynamic radar cruise control, and LED headlights that reduce energy usage. The Prius v also introduced a new feature, a panoramic sunroof option that is made of a lightweight yet strong resin, offering a 40 percent weight reduction from a traditional glass sunroof.