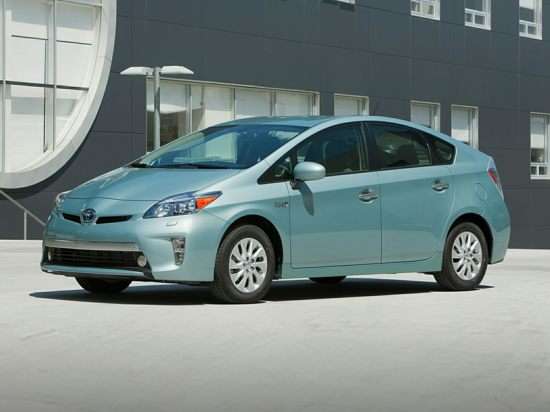 Changes for the 2014 Toyota Prius:

Aside from cancelling last year’s Prius Persona Edition model, Toyota makes no changes to the 2014 Prius.

Four versions of the 2014 Toyota Prius are available, with trim levels called Two, Three, Four, and Five. Toyota also builds a Prius Plug-in model in standard and Advanced model series. All Prius models are 5-door hatchbacks rated as a midsize car by the EPA. Notably, the Prius can be optioned with a number of Toyota Racing Development components to make it more fun to drive.

The standard 2014 Prius is equipped with a gas-electric hybrid powertrain that includes a 1.8-liter 4-cylinder engine, an electric assist motor powered by a nickel-metal hydride battery pack, a continuously variable transmission, and a regenerative braking system that recharges the battery. Together, this powertrain generates 134 horsepower, and the driver can choose between Normal, Power, Eco, and EV driving modes. In EV mode, the Prius can operate at speeds under 25 mph on battery power alone, but only for a short distance.

The Prius Plug-in employs a more sophisticated Lithium-ion battery pack, which allows the car to travel as far as 15 miles using nothing but electricity, provided the vehicle’s speed remains below 62 mph. When the battery reaches its minimum state of charge, the Prius Plug-in operates just like a standard Prius model. Toyota says the Prius Plug-in can be recharged in three hours using a standard household electrical outlet. An optional 240-volt quick charger cuts that time in half.

Both versions of the Prius come standard with free scheduled maintenance during the first two years or 25,000 miles.

According to the EPA, the 2014 Toyota Prius is rated to get 51 mpg in the city, 48 mpg on the highway, and 50 mpg in combined driving. Choose the Prius Plug-in model, and those figures are 51/49/50, respectively. When operated in electric-only mode, the Prius Plug-in receives a miles-per-gallon-equivalent (MPGe) rating of 95.

As this model summary is written, the National Highway Traffic Safety Administration (NHTSA) has not officially rated the 2014 Prius and Prius Plug-in for crash protection. Last year, the Prius earned a 5-star overall rating, while the Prius Plug-in was rated to deliver 4-star levels of protection.

Similarly, the Insurance Institute for Highway Safety (IIHS) has not yet rated the 2014 Prius as this summary is published. In 2013, the Prius was named a “Top Safety Pick.”

In addition to its powertrains, the 2014 Toyota Prius is offered with a navigation system and Entune Apps technology, features that come standard for the Prius Plug-in. Upgrade to higher levels of trim or add the right option package, and the Prius is equipped with a premium JBL audio system with GreenEdge speaker technology, LED headlights, a glass sunroof and an embedded solar cell array, a heads-up display, Dynamic Radar Cruise Control, a Pre-Collision System, Lane Keep Assist, and Safety Connect telematics with SOS emergency assistance.