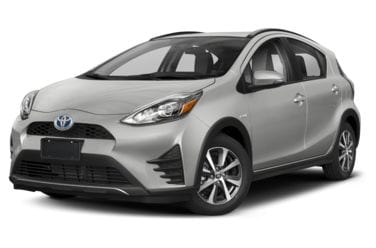 All About Toyota Prius c

The Toyota Prius c is a subcompact four-door hatchback that was designed to help Toyota round out its popular hybrid range (including the Prius lineup as well as gasoline-electric hybrid versions of other Toyota models). Like the original Toyota Prius, the Prius c is a gasoline-electric hybrid, and it is the third addition to the Prius family. The small size gives the Prius c a lower sticker price and higher fuel economy ratings than the regular Prius. In Japan, the Prius c's domestic market, the car is known as the Aqua. According to Toyota, the "c" stands for "city," and the Prius c was designed to attract single or coupled-up urban dwellers who don't need the cargo capacity or passenger space of a family car. The Prius c has a significantly shorter and narrower wheelbase than the original Prius hatchback. All global versions of the Aqua and Prius c are built at a Toyota assembly facility in Kanegasaki, Iwate, in Japan. The production facility initially experienced difficulties scaling up production to meet demand, since the Prius c outsold its initial sales projections, leading to shortages of the car in some markets.

Toyota Motor Corporation premiered the Aqua at the Tokyo Motor Show in 2011, and also showed the concept version of the Prius c in Detroit of that year. The production version of the Prius c was introduced a year later, at the North American Motor Show in Detroit in January of 2012, and the car was available for sale in the United States and Canada just a couple months following the show, in March. The Prius c reached Australia and New Zealand later that spring. The Environmental Protection Agency rated the Prius c the most efficient compact car of 2012 (excluding plug-in electric vehicles). In the United States, the Prius c is estimated to achieve fuel economy of 53 mpg city, 46 mpg highway, and 50 mpg combined. These ratings are close to those of the original Prius, although the Prius c yields improvements in city driving.

The Prius c is based on the platform of the Toyota Yaris, a subcompact hatchback with a traditional gasoline drivetrain, and inherits the front-engine, front-wheel-drive configuration from the Yaris (keeping the Prius c in line with the rest of the Prius range). It uses a version of the same Hybrid Synergy Drive hybrid drivetrain technology that's used in Toyota's other hybrid vehicles. The Prius c is powered by a 1.5-liter four-cylinder gasoline engine paired to a 45 kW electric motor; the drivetrain yields a combined 99 horsepower. The system also uses a sealed nickel-metal hydride battery. The drivetrain is paired to a continuously variable transmission. In EV mode, the Prius c can run solely on electric power (which is only possible during certain driving conditions). ECO mode helps modulate the driver's input (acceleration and braking) to run as efficiently as possible. The Prius c is available in four trim levels that feature different comfort and luxury features. Amenities such as keyless entry, power windows and locks, Bluetooth wireless integration, haolgen headlights, and USB outlets come standard. Upgraded packages include options such as alloy wheels, color-coded trim, fog lights, and heated front seats.