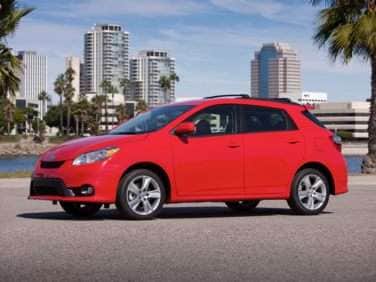 All About Toyota Matrix

The Toyota Matrix is a four-door, five-passenger compact wagon. The Toyota Matrix stepped into the ring in 2003 in order to take the place of the Corolla hatchback. Since the Corolla was now only available as a sedan, Toyota wanted to make sure that they still had a vehicle in place to capture the compact hatch market. Based on the Corolla platform and developed in co-ordination with General Motors (who market the Matrix as the Pontiac Vibe), the Matrix soldiered on nearly unchanged until the 2009 model year, when it underwent a significant re-design.

The Toyota Matrix is slightly longer and stiffer than the model it replaces, and the body has been re-worked to impart a sleeker, more aerodynamic appearance than its predecessor. An aggressive front end goes hand in hand with harder angles all around the car, including muscular bulges at the fenders. The changes are not limited to the outside of the vehicle – almost everything about the 2009 Matrix has been updated, re-invented or replaced, thoroughly refreshing the compact hatch.

Two new engine choices have made their way under the hood. A 1.8 liter 4-cylinder engine that produces 132 horsepower and 128 lb-feet of torque replaces the previous base motor. For those who crave more power, Toyota has decided to shoehorn in the 2.4 liter, 4-cylinder engine which can also be found in the Camry and the various Scion models. Available in the Matrix S and XRS, this motor doles out 158 horsepower and another 44 lb-ft of torque to the front wheels. The S is also available with all-wheel drive, but this saddled with a 4-speed automatic transmission. All other Matrix buyers get the choice between a 5-speed auto or a 5-speed manual gearbox. Fuel economy for both 4-cylinders is an impressive 32 miles per gallon on the highway, while the 1.8 liter betters the larger engine around town. These excellent numbers are despite the fact that the 2009 Matrix is approximately 200 lbs heavier than the outgoing model.

The base Matrix can be optioned out to include power windows and locks, keyless entry, a moon roof and cruise control, as well as a cold weather package. Stepping up to the S provides the additional power of the 2.4 liter engine, in addition to optional larger wheels, navigation system, and self-dimming mirrors. However it is the range-topping XRS model which is the most eye-catching of the three trim levels, from both inside and out. Nicer seats, a leather steering wheel and stability control combine with 18 inch wheels, an independent rear suspension and larger brakes to make the car a lot more fun to drive. The XRS is positioned as somewhat of a boy-racer model, with an under-hood strut tower brace and rear spoiler paying homage to the Matrix’s modest performance ambitions.

The Matrix has cross-demographic appeal - its high seating position and easy entry and exit make it popular amongst the older crowd, while the sporty good looks keep young buyers interested. Of course, the low pricing and high value help to make it appealing to almost everyone. The 2009 Toyota Matrix is a definite improvement over the first generation of vehicle, and it makes an excellent option as a safe and fun city car.