Although it’s still as surefooted off-road as the classic version first introduced in 1964, the 2016 Toyota Land Cruiser is a far different sort of beast. The current model has remained a traditional body-on-frame SUV, but nowadays it wouldn’t be out of place in the Toyota Motor Corporation’s upscale Lexus division. That said, the Land Cruiser doesn’t quite fit in with some so-called rivals because of its size: It’s noticeably smaller than three-row body-on-frame entries from the other high-end brands, which is an advantage on tighter trails. And speaking of advantages, the Land Cruiser was extensively updated for the 2016 model year, so it’s added plenty of new benefits, too.

The important thing to remember for this part of our test and review of the 2016 Toyota Land Cruiser is this: Toyota's big SUV is also a serious luxury vehicle complete with a standard leather interior and premium infotainment. The full portfolio of Toyota’s high-tech safety features is standard as well, and increased levels of technology also show up in the vehicle’s powertrain, with the first 8-speed automatic transmission ever fitted to a Toyota-branded vehicle. The powertrain remains as rugged as ever, though. Features such as full-time 4-wheel drive, the Multi-terrain Select system, and a 2-speed transfer case help make sure of that. The bottom line here: It's expensive. Its MSRP of $84,325 is more than $10,000 higher than that for a 2016 Cadillac Escalade.

The 2016 Toyota Land Cruiser has a suitably robust standard engine. It’s a 5.7-liter V8 that can pump out 381 horsepower and 401 lb.-ft. of torque, with Toyota emphasizing that 90 percent of that torque is available at just 2200 rpm. In other words, there’s plenty of pulling power, and the Land Cruiser also comes with a standard towing package. All that means a towing maximum of 8100 lb., along with plenty of low-end grunt for going off-road. Further helping are trail-friendly features like crawl control and a Toyota Kinetic Dynamic Suspension System.

Highlighting the exterior of the 2016 Toyota Land Cruiser is a new, more expressive front end with bolder grille bars and a multi-piece frame that flares out in its lower elements to underline the vehicle’s LED headlamps. Also increasing visual flair is the prominent hood sculpting, which creates sort of a dual power-dome effect. At the back, light-tube taillights and LED brake lights rest on top of a full-width chrome molding and restyled rear bumper. Tying those details together are 18-inch alloy wheels with a new-for-2016 design. The look overall is pretty subtle, especially in contrast to the Cadillac and Lexus SUVs.

An additional contrast can be found in the vehicles’ size. While the Escalade stretches nearly 204 inches, and the three-row LX570 comes in at more than 199, the Land Cruiser is 194.8 inches in length.

The cabin of the 2016 Toyota Land Cruiser doesn’t overwhelm owners with exotic materials and ostentatious design cues. Instead, it furnishes high levels of standard comfort, backed by standard semi-aniline leather seats that are offered in either black or brown. The front row, of course, is heated, vented and firmly bolstered, and second-row passengers enjoy multi-stage heating. Four-zone climate control—with 28 vents—allows for custom comfort in all three rows.

Yet because of the Land Cruiser’s size, its cabin dimensions are definitely smaller than for the three-row SUVs from Cadillac, Infiniti, and Lincoln. The Toyota and its corporate cousin, the Lexus LX570, are more direct competitors with the Land Cruiser, in fact, having more cargo space—81.7 cubic feet in total. Shoppers should note that Toyota achieves that rating with a unique sideways-folding split third row.

To complement its voice-recognition capability, the 2016 Toyota Land Cruiser gets a new 9-inch touchscreen this year, and it features split-screen capability to display information for both the navigation and audio systems at the same time. As for the sound system itself, it’s a JBL Synthesis unit with 14 speakers that include a subwoofer. Owners can use that setup to listen to their own digital devices, HD Radio, SiriusXM Satellite Radio and—thanks to the Entune App Suite—online audio resources such as iHeartRadio, Pandora, and Slacker Radio. (Other Entune App Suite apps include Destination Search, Facebook Places, Yelp, and OpenTable.)

To be clear, all that's standard, as is a rear-seat DVD/HDMI entertainment system with dual 11.6-inch display monitors that are built into the back of the front-seat headrests.

This 2016 Land Cruiser is so packed with standard equipment that the only thing left for Toyota to supply as an upgrade is a custom color. In this case, it’s a creamy, rich shade of white called Blizzard Pearl.

A few accessories are available as well, most designed to build on the vehicle’s standard functionality. For example, there’s a variety of all-weather mats and cargo-management solutions, and Toyota Racing Development (TRD) has both air and oil filters for the Land Cruiser. Adventurous owners also can stay prepared for the unexpected with a Toyota first-aid kit and an emergency-assistance kit with booster cables, flashlight, survival blanket, gloves, and more.

Neither the IIHS nor NHTSA has tested the 2016 Toyota Land Cruiser, but that’s not altogether out of the ordinary for low-volume vehicles like this.

Nor have Toyota engineers been stingy with proactive safety measures. For 2016, for instance, they’ve deployed a new Toyota Safety Sense-P system for the Land Cruiser. This bundle brings forward-collision warning and automatic braking for low-speed driving scenarios, such as in stop-and-go traffic, while also featuring lane-departure alert, automatic high beams, and the automaker’s Dynamic Radar Cruise Control. Beyond the Safety Sense-P setup, the Land Cruiser also leverages a backup camera, blind-spot monitor, and rear cross-traffic alert.

Even Toyota’s Safety Connect telematics is standard, so owners can rely on automatic crash notification, emergency assistance and more, all integrated into a system that’s entirely independent of the owner’s smartphone.

Are you wondering about the 2016 Toyota Land Cruiser's off-road credibility? No need for concern, thanks in part to a tough suspension with a front anti-roll bar that can be automatically disconnected for increased wheel articulation. Also, the Torsen limited-slip differential can be manually locked for an even 50/50 torque distribution in particularly slippery conditions. What's more, the multi-mode drive system has dedicated settings to optimize performance for five different off-road surfaces.

A standard multi-terrain monitor allows Land Cruiser owners to use those tools with more confidence, as it creates nearly a 360-degree view of the area around the vehicle by using cameras mounted on this luxurious and capable Toyota's front, side, and rear.

The 2016 Toyota Land Cruiser is an SUV for the select few drivers who prize real-world capability and comfort but who don’t mind paying luxury-brand pricing to get those benefits. Customers also will want to pay close attention to the Land Cruiser’s cabin dimensions: The same nimble size that makes it more agile off-road means there’s less interior space than in many of the more massive three-row SUVs. Yet if the Land Cruiser fits your budget, and your family fits in the Land Cruiser, Toyota’s trail-ready icon is tough to beat—and just plain tough, too. 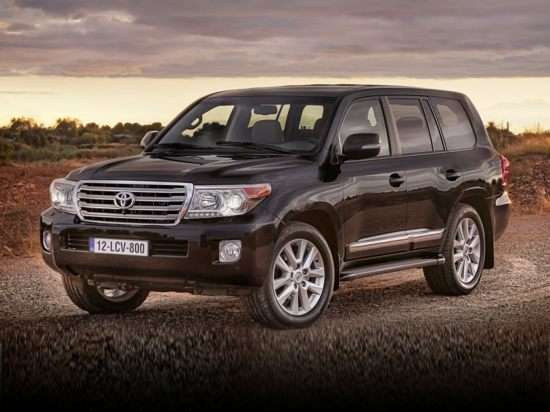