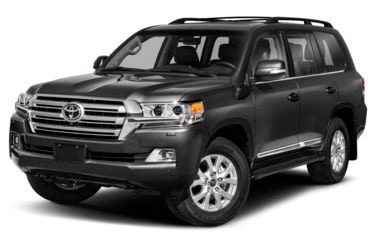 All About Toyota Land Cruiser

For 2008, the Toyota Land Cruiser was re-designed in order to update the previous platform, which had been sold for almost ten years. One of the greatest differences between the most recent generation and the one that came before it lies in outward appearance. While the 100 Series Land Cruiser’s styling represented a link to the square, somewhat stodgy Land Cruisers of old, the 2008 200 Series adopts a much more modern look which is reminiscent of the Lexus LX, whose platform the re-design shares. While this may upset purists, the change moves the Land Cruiser forward and puts it in line with other Toyota SUV’s.

The Toyota Land Cruiser is essentially a king amongst pretenders when it comes to all-terrain driving. While many large sport utility vehicles are hampered by their size and weight when taken off-road, the Toyota is designed in order to minimize overhangs that could get caught on rocky outcroppings or steep elevation changes. The wide track also gives it a well-distributed footprint which makes it stable enough to drive on a 43 degree sideways incline – impressive for a large vehicle. The vehicle’s suspension is designed to make easy work of rough trails, and the stainless steel frame is 40 percent stiffer than the 100 Series Land Cruiser. A number of electronic driver’s aids also come into play when venturing far from civilization, such as Toyota’s advanced Crawl Control system. This allows the safe, controlled descent of almost any incline, no matter how severe, as the system controls each brake individually to keep speeds under control.

The interior of the Land Cruiser is very comfortable and well laid out, and although leather seats, front and rear climate control and a 14 speaker audio system are provided, the vehicle feels more like a glove than a living room – everything just fits. The vehicle comes with so many standard features that the only options that are available are limited to a navigation system, a backup camera, and a few other assorted odds and ends like heated second row seats. Almost anything else that a buyer could want comes with the vehicle already, which is no real surprise once the north-of-sixty-thousand dollar sticker price is revealed.

While the Land Cruiser may seem expensive, it is one of the best built, most carefully managed brands in the entire Toyota lineup. These vehicles maintain an extremely high resale value and a devoted following around the world. As a large, off-road SUV it knows few equals, and around town the 5.7 liter, high-technology V8 engine provides 381 horsepower with great poise and deceptive smoothness. Combined with full-time 4-wheel drive, the sure-footed Land Cruiser makes drivers feel powerful and in control no matter what the road conditions.