The 2016 Toyota Highlander Limited sports a rare combination of characteristics for crossover customers: It has an extra row and extra room compared to typical compact crossovers, but that’s bolstered by nimbler proportions than the largest 3-row choices. For extra efficiency, there’s a hybrid Highlander, too. And with many folks looking to the Highlander as a minivan alternative, it’s also worth noting that Toyota has looked to its own minivan for some especially family-friendly features. For example, the available Easy Speak System leverages the vehicle’s voice recognition microphone, so the driver’s voice is broadcast over the Highlander’s audio speakers, improving the ability to communicate with the rear row occupants.

The range-topping 2016 Toyota Highlander Limited is competitively priced with an MSRP of $40,915, which includes a full premium cabin and the entry’s top infotainment and safety technologies. In fact, the Highlander has a standard blind spot monitor at that cost, plus luxuries like perforated leather seating surfaces and, for the front row, both heating and ventilation. In a rival like the Honda Pilot, getting those kind of first-row features as standard equipment also requires owners to pay for all-wheel drive, at an MSRP of $46,770. Of course, you can get AWD in the Highlander as well, with Toyota’s Dynamic Torque technology available for $2,180 to deliver both on-demand traction and a dedicated “low” setting for full-time 4-wheel drive and maximum grip.

Green-focused shoppers will find details about the expected hybrid model lower in our 2016 Toyota Highlander Limited review, but even drivers who prefer a traditional gasoline engine will enjoy relatively strong fuel-efficiency results. The standard V6 leverages a 6-speed automatic transmission to achieve EPA grades of 19 MPG city/25 MPG highway/21 MPG combined, which compares to the Chevy Traverse at 15 MPG city/22 MPG highway/18 MPG combined. That said, the Highlander also has 270 horsepower and 248 lb.-ft. of torque, for more output than the Nissan Pathfinder and can tow rating of 5,000 lbs. To make pulling even easier for 2016, the maximum towing package has been made standard for all V6 Highlanders.

As mentioned at the top of this 2016 Toyota Highlander Limited review, this vehicle is a bit of a tweener: It’s 191.1 inches in length, making it significantly longer than compact 3-row alternatives like the Nissan Rogue (182.3 inches) or Mitsubishi Outlander. Yet it’s not as overly large as thirstier choices such as the Chevrolet Traverse or Ford Flex, both of which are well over 200 inches but trade away the ability to get 20 MPG in combined driving.

The Limited trim then brings lux cues including LED daytime running lamps and 19-inch 5-spoke Chrometec wheels with a bright finish, for a complement to the bold wheel-arch moldings and other rugged details that are standard for the Highlander.

The dashboard of the 2016 Toyota Highlander Limited is a highlight of the cabin, with a sort of sidewise, yin-yang look that’s quite stylish. The Highlander’s interior is equally functional, though, for the versatility expected of a 3-row crossover. Thus, there’s a large, roomy console/armrest up front, along with a side table for the second-row captain’s chairs. The third row has a 60/40 split and both folds flat and reclines.

Naturally, the 2016 Toyota Highlander Limited has a high-end audio system, in this case boasting 12 JBL GreenEdge speakers for high-powered, high-efficiency sound reproduction. But that’s merely the tip of the infotainment iceberg, and the Highlander also has navigation, voice recognition, an 8-inch touchscreen with split-screen capability, and the Entune App Suite. With that, users can leverage their compatible smartphones for access to popular mobile apps; those with compatible iPhones also see Siri Eyes Free functionality in the Highlander. An additional nav benefit: turn-by-turn directions are displayed in the vehicle’s 4.2-inch LCD multi-information display, too.

Safety ratings are surprisingly inconsistent in the 3-row crossover segments, although drivers can count on the 2016 Toyota Highlander Limited for both a 5-Star Overall Safety Score from NHTSA and, when properly equipped, a Top Safety Pick+ recognition from the IIHS. Chevy, Ford and Nissan rivals are all missing from the Top Safety Pick honor roll.

In terms of technology, a blind spot monitor, rear cross-traffic alert and a rearview camera are all standard, while a Driver Technology package serves up lane departure alert and a pre-collision system with Toyota’s Dynamic Radar Cruise Control. In fact, that tech so impressed the IIHS team that the Highlander also scored an Advanced rating for front crash prevention as part of the Top Safety Pick testing.

Beyond the safety package covered in the previous part of our 2016 Toyota Highlander Limited review—which also includes automatic high beams and subscription based emergency telematics services—Toyota has two more benefits bundles for the vehicle. Families on the go will love the rear-seat entertainment system, since it can keep back-row passengers busy with movies and games with a flip-down 9-inch display screen, wireless headphones and a remote control.

The brand also has a Limited Platinum package on the menu to satisfy owners’ appetite for even more luxury. A heated, leather-trimmed steering-wheel, heated second-row captain’s chair and a panoramic moonroof are all in the mix, and Toyota also has updated the package for 2016 by introducing rain-sensing windshield wipers.

The 2016 Toyota Highlander Limited also furnishes an available hybrid powertrain for a major advance in fuel economy performance. Per the EPA, the Highlander Hybrid can hit 27 MPG city/28 MPG highway/28 MPG combined, and that’s with standard all-wheel drive. As a result, Toyota’s 3-row crossover has better fuel efficiency ratings with AWD than its rivals have without it. Then, if you compare the Highlander Hybrid to the competition with AWD, the Toyota’s leading position becomes more obvious: That Chevy Traverse is rated at 15/22/17 with AWD, so the Highlander Hybrid is 80 percent/27 percent/65 percent more efficient.

Even against the AWD Honda Pilot, the Toyota hybrid has a 27 percent lead in combined fuel economy.

Shoppers in the market for a 3-row crossover need to evaluate their choices particularly carefully, because the size of those final rows can vary fairly widely. After all, there’s a nearly 2-foot difference in length between the smallest 3-row entry and the largest. The 2016 Toyota Highlander Limited is the “just right” selection that seats up to seven, and it accomplishes that job with a premium, high-tech cabin and plenty of cargo space. That means it should get the job done for plenty of customers, too. 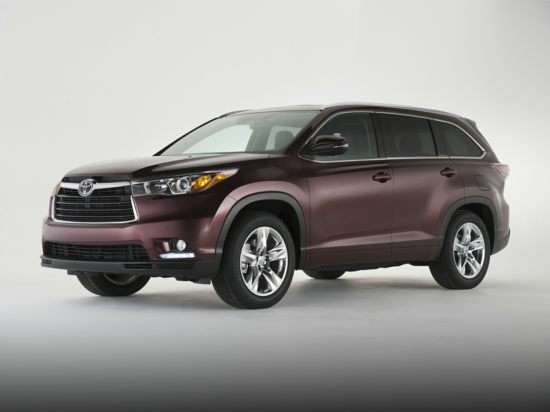