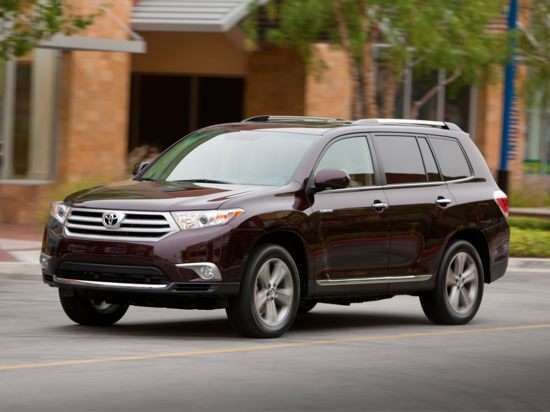 Changes for the 2013 Toyota Highlander/Highlander Hybrid:

Further refining one of the country’s favorite three-row crossovers, Toyota has upgraded the audio choices for the 2013 Toyota Highlander and Highlander Hybrid by adding Display Audio as a standard feature on the former, then providing the latter with a standard Entune infotainment system with navigation. The automaker also simplifies things for customers for the new model year, introducing a new “Plus” model that bundles some of the top options offered on the 2013 Toyota Highlander.

Keeping in mind that all gas-only models are available in both two- and all-wheel drive, with the hybrid being AWD only, the 2013 Toyota Highlander is available in the following trim levels:

The 2013 Toyota Highlander Hybrid is kitted out to match the Highlander SE fairly well, although the former boasts a standard Entune navigation system and some hybrid-specific design cues; the fuel-sipper can be ordered in the Limited trim, too.

Three powertrains are available for the 2013 Toyota Highlander, with a 2.7-liter 4-cylinder engine as the jumping off point. Paired with a six-speed automatic transmission and standard in the Highlander and Highlander Plus, this powerplant can develop 187 hp and 186 lb.-ft. of torque. Offered in the Plus and SE, and standard on the 2013 Toyota Highlander Limited, is a3.5-liter V6 that serves up 270 hp and 248 lb.-ft. of torque, with that output coming through a five-speed automatic.

In terms of occupant protection, the 2013 Toyota Highlander and Highlander Hybrid were both rated as 4-star safety performers by the National Highway Traffic Safety Administration (NHTSA); the tale of the tape here: 4 stars in frontal and rollover testing and 5 stars for side-crash protection. The Insurance Institute for Highway Safety (IIHS) named the 2013 Toyota Highlander a Top Safety Pick after it earned the highest scores in the institute’s testing for front-, side-, rear- and rollover-crash performance.

The automaker’s Entune infotainment and connectivity system is one of the top technologies available in the 2013 Toyota Highlander, combining voice control of key features with access to popular mobile apps and services like the Bing search engine, iHeartRadio, Pandora, MovieTickets.com and OpenTable. Also on tap from the tech department are a full-function nav system, premium audio componentry from JBL, a rearview camera, air-filtered climate control, and Toyota’s Smart Key System.