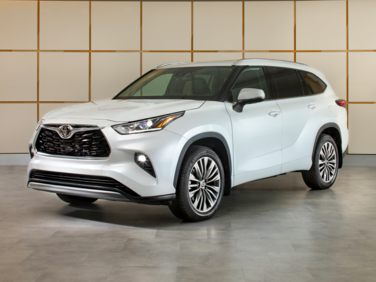 All About Toyota Highlander

The Toyota Highlander is a four-door, seven passenger mid-size SUV, and a four-door, seven passenger hybrid SUV. In 2002, Toyota released the Highlander, a crossover SUV based on the same platform as the popular Camry mid-size sedan. The Highlander combined the high-seating position and all-wheel drive associated with sport utility vehicles along with good, car-like handling. Offering similar engine choices to its platform-mate sedan, the Highlander quickly became one of Toyota’s best-selling SUV’s, outpacing even the popular 4Runner.

The Toyota Highlander has been almost entirely re-designed. In comparison to the previous model the exterior has been updated to reflect a more modern, less boxy look, with well-delineated fender wells and a sportier-looking front end and greenhouse. The power train options have also been simplified, banishing the original Camry-derived 4-cylinder engine and giving the buyer a choice between Toyota’s 3.5 liter V6 or the 3.3 liter V6 and electric motor combination found in the Hybrid edition of the Highlander. The 3.5 liter makes an impressive 270 horsepower, a substantial improvement over the previous generation’s power plant. However, that extra power is put to use motivating the new, larger platform, as the 2008 Highlander is 500 lbs heavier than it was the year before. The Hybrid engine is rated at 209 horsepower for the combined gasoline and electric motors. Both engines put power to the wheels through automatic transmissions, with the Hybrid receiving a continuously-variable unit.

There are three different trim levels which can be ordered for the Highlander (although the Hybrid only gets the base and Limited trims). All-wheel drive is optional on all three, except for the Hybrid, where it comes standard. The different options packages for the Highlander can get a little confusing, due to the inclusion of the special case Hybrid model, but overall, the crossover comes loaded with base equipment: air conditioning, power door locks, power windows, intermittent wipers, a six-speaker stereo system and 17-inch wheels. If buyers wish to personalize their Highlander, they can order 19-inch wheels, a stiffer sport suspension, a navigation system, DVD player and heated leather seats.

Inside, the vehicle is comfortable when transporting 5 adults, and seating for 7 is available, although somewhat cramped. Both rows of rear seats can fold flat to improve cargo capacity. On the road, the Highlander provides compliant and very comfortable driving, displaying none of the harshness that some might expect from an SUV of this size. The Highlander, even in Sport trim, is far from performance oriented, and any attempt to throw the SUV hard through the corners instantly reminds the driver that it is more suited as a people-mover than a thrill-ride. Braking response is adequate, and stability control helps with wet roads and snowy conditions.

Overall, the Toyota Highlander is an excellent minivan replacement for those who desire something a little more stylish, and with all-wheel drive capability. However, while the Hybrid provides very good fuel economy in mixed driving, it is expensive, and all other configurations of the crossover get miles per gallon ratings in the teens when it comes to stop and go driving. If fuel economy is of more importance than the somewhat vestigial third row seating offered in the Highlander, then it might be worth taking a look at the smaller Toyota RAV4 instead.

The 2009 Toyota Highlander is a carryover from 2008. The 2009 Highlander can be ordered in base, Sport, Limited, Hybrid and Hybrid Limited trims. The standard Highlander features a 2.7 liter, 4-cylinder engine that puts out 187 horsepower and 186 lb-ft of torque. A 6-speed automatic transmission sends power to the front wheels. Fuel economy for this model is rated at 18 miles per gallon around town and 24 miles per gallon on the highway. Buyers can upgrade to a much more potent, 270 horsepower V6 engine that also produces 248 lb-ft of torque. The exclusive engine for the Sport and Limited trims, and matched with a 5-speed automatic transmission, this larger motor’s fuel mileage is identical to the 4-cylinder. Four-wheel drive is also an option with the V6.

The 2009 Highlander Hybrid and Hybrid Limited feature a 3.3 liter V6 that combines with an electric motor to produce 208 horsepower and 212 lb-ft of torque. All-wheel drive is standard, and gear shifts are controlled by a continuously-variable automatic transmission. Fuel economy for both trims is shown as 27 miles per gallon in city driving and 25 miles per gallon on the highway.