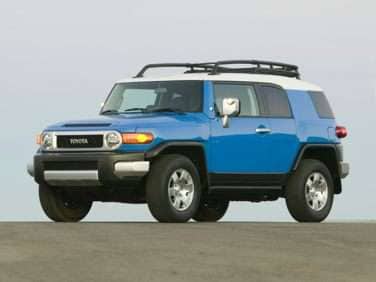 All About Toyota FJ Cruiser

The Toyota FJ Cruiser is a four-door, five passenger mid-size SUV. There was a time when Toyota and Land Rover vied for supremacy around the world in terms of who was capable of building the best all-around off-road vehicle. Toyota’s main entry in this engineering test was the FJ40, the 2-door version of their Land Cruiser. Equipped with an unstoppable diesel engine and a nimble suspension, the FJ40 prowled the plains of the Serengeti as well as the lush tropical forests of South America and the snowy reaches of the Nepalese mountain ranges. The vehicle became an icon for Toyota, and is still celebrated by enthusiasts and clubs to this day.

Reflecting the decision by several manufacturers to revive older name plates as well as nostalgic designs, Toyota brought the FJ Cruiser to market in 2007. Meant to capture the spirit of the original FJ40, the new FJ Cruiser displayed a Tonka-truck look that is largely unchanged for the 2008 model. With a friendly front-end, upright windshield and decidedly uncommon, angular styling, the FJ is very much a love it or hate it type of vehicle. Lurking underneath the unconventional appearance, however, is an extremely capable SUV, both as an off-roader and a people-mover.

The FJ Cruiser is not stratified into different trim levels. Each vehicle comes with Toyota’s 239 horsepower VVT-i V6 engine, which in the FJ produces 278 lb-ft of torque, making it a decent rock climber and suitable for towing lighter loads. A 5 speed automatic transmission is standard on 2-wheel drive models, while 4x4’s get the choice of the auto or a 6-speed manual. Buyers can also specify as to whether they desire full-time or part-time 4-wheel drive, allowing them to customize the vehicle to suit the amount of trail driving that they do. Each FJ Cruiser comes with traction control and stability control, while Toyota’s Active Traction Control system is an option on 4-wheel drive models.

Inside the FJ Cruiser, the standard options package finds buyers fairly well equipped, with a power driver’s seat, power door locks and windows, and an MP3 CD player. In keeping with the utilitarian nature of the FJ’s origins, leather is not available. However, to reflect the vehicle’s off-road capabilities, a compass, thermometer and a device to measure the degree of incline of the ground surface are optional, as are alloy wheels, a locking rear differential, and trail-rated tires with Bilstein shock absorbers. A higher end stereo system is also available.

The 2008 FJ Cruiser is definitely a vehicle which speaks to a very specific market. Like the Jeep YJ and TJ, the FJ is meant to appeal to those who are more interested in backwoods adventures than cruising down the boulevard. That being said, the FJ Cruiser does have a substantial amount of aesthetic appeal, and it really stands out in the crowd of increasingly bland mid-size SUV’s. Combining this with its controlled and comfortable pavement driving, and reasonable fuel economy, the FJ Cruiser is an excellent alternative to those who are looking for something a little bit different - and a little more capable on the trail than the Toyota 4Runner.

The 2009 Toyota FJ Cruiser is a carryover from 2008. The 2009 FJ Cruisers comes in a single trim, which is powered by a 4.0 liter, V6 engine. With 239 horsepower and 278 lb-ft of torque, this unit can be matched with either a 5-speed manual or 6-speed automatic transmission. Four-wheel drive is also an option. The rear-wheel drive edition of the SUV sees fuel economy of 17 miles per gallon in the city and 21 miles per gallon on the highway.