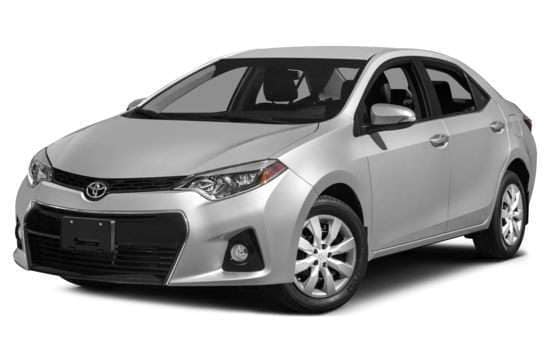 Changes for the 2015 Toyota Corolla:

Within the 2015 Corolla lineup, there are L, LE, LE Eco, and S trim levels. Buyers can add Plus and new Premium trim levels to all but the base Corolla L model.

The Corolla L is a basic model, offered in white, black, and shades of gray with a choice between a manual and an automatic transmission. A variety of dealer-installed accessories are available, including, strangely, items from the Toyota Racing Development (TRD) catalog. However, if you don’t have the cash to upgrade to the LE, you don’t have the cash for these overpriced extras.

The LE model adds automatic climate control, a 6.1-inch touchscreen infotainment system, a reversing camera, heated outside mirrors, remote keyless entry, cruise control, and much more. The LE Eco is basically the same thing, but with a more efficient engine.

A 132-horsepower, 1.8-liter 4-cylinder engine is standard for the Corolla L, LE, and S models. The L and S Plus versions of the car offer a 6-speed manual gearbox, while all other variants are equipped with a continuously variable transmission (CVT). In the sporty Corolla S, the CVT features paddle shifters and is tuned for a more engaging driving experience.

Select the Corolla LE Eco for a more powerful and fuel-efficient engine. This model contains a 140-horsepower, 1.8-liter 4-cylinder engine equipped with what Toyota calls Valvematic technology. A CVT is the only transmission choice.

All versions of the Corolla include free scheduled maintenance for the first two years or 25,000 miles of ownership.

Review EPA fuel economy estimates, and in combined driving the L, LE, and S models get between 31 mpg and 32 mpg, no matter which transmission or trim level you choose. The LE Eco is rated to return 35 mpg in standard format. Add the Plus or Premium packages, and that number drops to 34 mpg.

In crash tests conducted by the NHTSA, the Corolla earns an overall rating of 5 stars. The Insurance Institute for Highway Safety (IIHS) also rates the Corolla highly, except in the small overlap frontal-impact test. In 2014, the Corolla received a “Marginal” rating in this regard.

Toyota equips every 2015 Corolla with Bluetooth connectivity and a USB 2.0 port. Upgrade to the LE model to get a 6.1-inch touchscreen infotainment system and a reversing camera. Corollas equipped with the new Premium equipment package add a navigation system, the company’s Entune App Suite technology, traffic and weather reports, and both HD Radio and satellite radio.