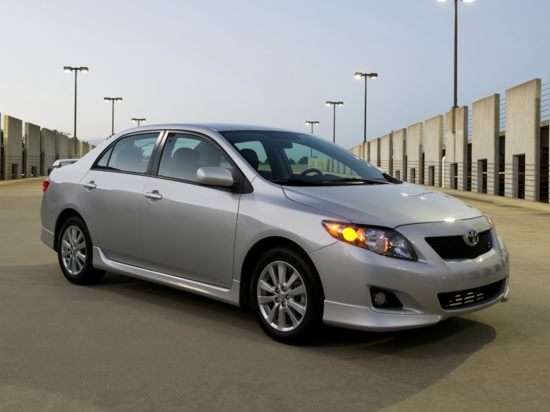 The 2009 Toyota Corolla is in its tenth generation model and has been completely redesigned for this year. Besides a new look, we also see the return of the Toyota Corolla XRS.

Toyota has sold more than 33 million Corollas since 1966. It’s been refined and updated with many long overdue safety features added in. As always, the Corolla has the same platform as the Toyota Matrix hatchback. Trims this year include CE, S, LE and the XRS.

This year’s Corolla has the same wheelbase as last year's model but it is close to 10 mm longer. It’s wider, has a wider track in both the front and the back, and it is also lower than the older model. These changes improve the stability and handling. Other changes for this year include a new suspension system, a more rigid body structure, new power steering, a redesigned interior and exterior. This year also heralds two new engines. Fuel economy has always been a driving focus of the 2009 Toyota Corolla.

The S model still has the same base model features but does offer various sporty touches this year. The top of the line Corolla is the XLE. The XRS doesn’t have the same level of luxury but does offer more power and a sport-tuned suspension.

All of the vehicles except the XRS, has an updated version of the extremely efficient 1.8 liter four cylinder engine. For the Toyota Corolla XRS, there is a new 2.4 liter four cylinder engine that produces 158 hp with 162 lb ft of torque. This makes the engine very quick but not as efficient in gas consumption. This year's XRS offers less horsepower than the previous-generation XRS, but does have a lot more torque. Both of these new engines are paired with a five speed manual transmission at the base level. The 1.8 liter can option to a four-speed automatic and the 2.4 liter can be paired to a five-speed automatic.

The XRS employs a 158 hp, 2.4 liter inline-4, which makes the car reasonably quick, but you pay for the speed and the get-up-and-go at the pump.

The interior of the 2009 Toyota Corolla has been totally redesigned. There are new more comfortable seats, new Optitron gauges and the first electric power steering system. The vehicle also boasts standard tilt and telescopic wheel, larger cargo space and a quieter and smoother ride due in part to the new suspension. The more rigid body structure and the new suspension help to create a safer and more comfortable ride.

This year’s model being wider offers more hip and shoulder room. There is also the added benefit of a telescoping steering wheel – a helpful additional for those six foot drivers out there. The other additions to the interior include an keyless startup, a full navigation system and an auxiliary audio input. The updated styling gives the already popular vehicle a whole new lease on life.

The 2009 Toyota Corolla has had its safety features boosted. Standard equipment now included on all the models are anti-lock brakes with brake assist, and electronic brake force distribution. There are also active head restraints, which move up and forward to limit the damage to the seat occupant’s head in the event of an accident. Also standard for all trims are six airbags; front and driver passenger airbags, front seat mounted side airbags and two-row side curtain airbags. The XRS trim has additional stability and traction control as well.