The Toyota Camry is a four door five passenger midsize sedan that packages the Japanese automaker’s proven reliability into an affordably spacious and well-equipped economy car.  Toyota offers the Camry with standard safety and convenience features, like 10 airbags, power accessories and BLU Logic hands free wireless connectivity, in six distinct trim levels, ranging from the base L to the LE, then the SE and all the way up to the XLE, as well as the gas/electric Hybrid LE and Hybrid XLE models, with a choice of either a fuel sipping four cylinder or a surprisingly powerful V6, as well as a 40+ MPG hybrid sedan.

The entry level Camry L is powered by a 2.5 Liter VVT-i four cylinder that makes 178 HP and 170 lb-ft of torque mated to an electronically controlled ECT-i six speed automatic transmission which is good for an estimated 25 MPG around town as well as 35 MPG on the highway.  The base Camry rides on a set of 16 inch steel wheels and benefits from a six speaker AM/FM/CD/MP3 stereo with USB and auxiliary inputs for digital media devices as well as a covered center console and a 60/40 split rear seat with its own individual center armrest that incorporates cup holders starting at $21,955.  The next step up the Toyota line is the well equipped $22,500 Camry LE, available with a one touch power tilt/slide moon roof and a six speaker Display Audio stereo that centers around a 6.1 inch touch screen infotainment center complete with Bluetooth wireless audio streaming capabilities and a multi function in key remote with standard keyless entry.

The Toyota Camry SE is the sportiest member in the family, and is the first to offer the available 3.5 Liter V6 that produces 268 HP and 248 lb-ft of torque, good for an estimated 21 MPG in the city and up to 35 MPG on the highway.  Starting at $23,000 the Camry SE is dressed up with a set of 17 inch wheels, projector beam headlamps with black sport trim bezels, integrated fog lamps, a sport mesh grill and power mirrors as well as a chrome tipped exhaust.  Meanwhile the $26,640 V6 gets a set of 18 inch rims with matching dual chrome tipped exhaust.  On the inside, the SE receives SofTex sport fabric seating, with leather available as an option, as well as a leather wrapped sport steering wheel with paddle shifters.  Camry SE owners will also benefit from the available Display Audio with six speakers with XM Satellite radio connectivity and Entune that includes Bing and Pandora as well as real time traffic, weather and sports.

The top of the line gas powered Camry XLE starts out at $24,725 and comes with the one touch power tilt/slide moon roof standard and rides on a set of 17 inch wheels no matter which engine is sending power to the front wheels.  On the inside the XLE comes with power adjustable cloth seats for the four cylinder, and leather with Ultrasuede inserts for the $29,845 V6, as well as a leather wrapped multifunction steering wheel, wood grain style trim with chrome door pulls, dual zone automatic climate control and the 6.1 Display Audio system, while the V6 gets the Premium package standard.

The $25,900 Toyota Camry Hybrid LE is powered by a 2.5 Liter four cylinder VVT-i gas engine and an electric motor making a total of 200 HP being channeled through a continuously variable transmission which is good for an estimated 43 MPG in the city and as much as 39 MPG on the highway.  The Hybrid LE comes with energy saving features like electric powers steering to add a few more MPGs under the hood, projector beam headlamps with an automatic on/off feature to save energy, a Smart Key System with push button ignition and illuminated approach lights as well as metallic tech grain interior trim with chrome door pulls to finish off the interior.  The more affordable hybrid Camry also comes with a six speaker AM/FM/CD/MP3 stereo complete with USB inputs and iPod connectivity as well as BLU Logic while riding on a set of 16 inch steel wheels.

The top of the line $27,400 gas/electric Camry Hybrid XLE is available with the Convenience Package that bundles the available backup camera, HomeLink universal transceiver and an anti-theft system with alarm into a tidy little parcel.  The Hybrid XLE is distinguished from the lesser Camry Hybrids thanks to a pair of front fog lamps, a chrome tipped exhaust, optional power tilt/slide moon roof and a set of 17 inch alloys wrapped in low rolling resistance tires.  In car entertainment is handled by a 6.1 inch touch screen infotainment center standard that can even stream music via Bluetooth technology wirelessly, and is upgradeable to a Premium HDD Navigation unit with Entune being controlled by an even larger 7 inch touch screen. 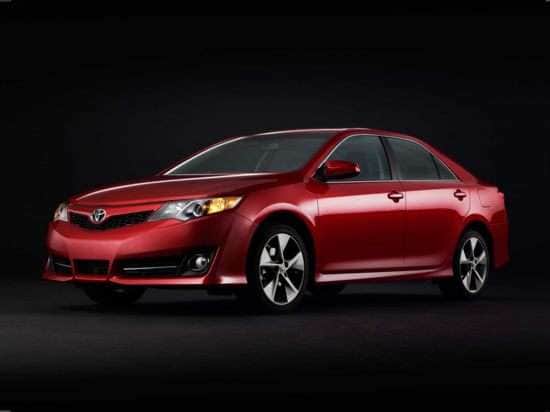