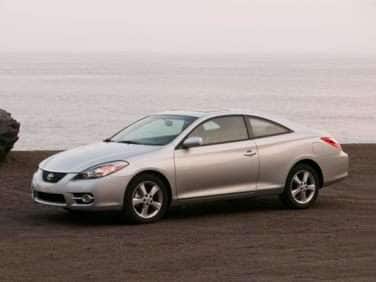 All About Toyota Camry Solara

The Toyota Camry Solara is a two-door, five-passenger mid-size coupe and a two-door, four-passenger convertible. The Camry Solara is manufactured in Georgetown, Ky. alongside the Toyota Camry, Toyota Venza and Toyota Avalon. The Toyota Camry has always been one of the most popular mid-size cars in North America, but it has never really been synonymous with performance. The introduction of a 2-door coupe in the mid-90’s did not fare nearly as well as its Honda Accord competitor, and the model was quietly dropped after a brief run. However, Toyota was determined to try their luck again, and re-introduced a sportier version of the Camry called the Camry Solara in 1999. Available as both a coupe and a convertible, the sleek lines of the Solara gained a following amongst car buyers, and has been a success for the company. For 2008, the Camry Solara continues on for its final year of production.

The coupe is available with either a 155 horsepower 4-cylinder, or a 210 horsepower V6. Each of these engines comes with Toyota’s VVT-i variable valve timing system, which allows for greater control over engine characteristics when it comes to both performance and fuel economy. The convertible comes exclusively with the V6 power plant, coupled with a 5-speed automatic transmission. The V6 imparts both versions of the Solara with a healthy amount of sporty acceleration, launching the drop-top to sixty miles per hour in 6.9 seconds. Fuel mileage is not as spectacular, however, turning in an average of 22 miles per gallon in mixed driving. The 4-cylinder is slightly more frugal when it comes to the gas pump, making the Solara coupe a better buy for those who are looking for an affordable commuter car with a little bit more style than a sedan. A 5-speed manual is also available in the coupe.

The Solara coupe comes in three different trim levels, while the convertible only has two. Options for both cars range from a more aggressive sport suspension and larger alloy wheels to interior goodies like leather seats, upgraded stereo and a navigation system. While the rear passenger quarters in the coupe may be a bit less roomy than its sedan twin, it is still comfortable for adults and compares favorably with other vehicles in its class. The convertible can feel slightly claustrophobic with the top up, but once the two latches that hold it to the windshield are released, it folds down quickly and gives a pleasant, open-air feeling that only top-down motoring can impart.

While the convertible is of course constructed with the same eye to reliability and function as the coupe, it does feel flimsier than the 2-door Solara, even with the top up. The chassis exhibits more flex through corners, and rough roads can cause significant interior shake that is noticeable to the driver. None of these behaviors are particularly unusual when it comes to drop-tops, but buyers taking their first test drive in the Solara may be unaccustomed to these characteristics. The coupe is much more refined when it comes to road manners, behaving very much like the sedan. This makes it the better buy for those who are more concerned with comfort than they are with feeling the sun beat down upon them while they head up the highway.