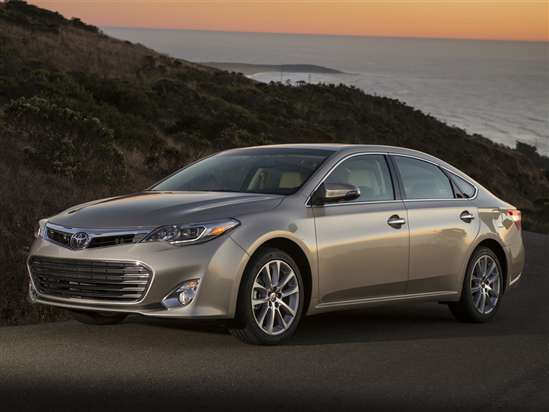 Changes for the 2014 Toyota Avalon:

In its sophomore year following a complete redesign, the 2014 Avalon gains a standard reversing camera and a turn signal designed to provide three blinks with a single tap in order to indicate a lane change. The Avalon Limited also gets new ambient lighting for the dashboard.

The 2014 Toyota Avalon is offered with a gasoline V-6 engine or a gas-electric hybrid powertrain. The Avalon V-6 is offered in base XLE trim. Both versions can be outfitted with XLE Premium, XLE Touring, and Limited trim levels.

The Avalon Limited is equipped with HID headlights, LED running lights, auto-dimming side mirrors, rain-sensing wipers, and a power rear window sunshade. Additionally, the Limited includes triple-zone climate control, a hard-drive navigation system with a 7-inch touchscreen, a premium sound system, Safety Connect services, and a Blind Spot Monitor with Rear Cross-Traffic Alert. Premium leather is wrapped around a 10-way power driver’s seat and an 8-way power front passenger’s seat, and both front seats are heated and ventilated while the rear seats are heated.

A 268-horsepower, 3.5-liter V-6 engine is standard for the 2014 Avalon, delivering its power to the front wheels through a 6-speed automatic transmission. The Avalon Hybrid is equipped with a 2.5-liter 4-cylinder engine, an electric assist motor, a nickel-metal hydride battery pack, a continuously variable transmission (CVT), and regenerative brakes comprise this powertrain, which makes a combined 200 horsepower. An EV driving mode allows the Avalon Hybrid to travel short distances at low speeds using nothing but electricity from its battery pack.

In combined driving, the Avalon V-6 returns 25 mpg. Compare that to the Avalon Hybrid’s combined fuel economy rating of 40 mpg, and the latter’s $2,390 price premium looks like a bargain.

According to the National Highway Traffic Safety Administration (NHTSA), the 2014 Toyota Avalon earns a 5-star overall crash-test rating. The Insurance Institute for Highway Safety (IIHS) gives the Avalon the highest rating of “Good” for all crashworthiness assessments except for the small overlap frontal-impact test, for which the Avalon has not been evaluated as this summary was written.

Toyota reserves its most advanced technologies for the XLE Touring and the Limited. The XLE Touring includes a navigation system and Entune App Suite technology, and can be optioned with a Blind Spot Monitor with Rear Cross-Traffic Alert. The Avalon Limited adds standard Safety Connect services including Automatic Collision Notification. In the event of an airbag deployment, Automatic Collision Notification speeds rescuers to the scene of the accident. A Dynamic Radar Cruise Control system with a Pre-Collision System is exclusively available for the Limited model.