With hybrid cars based on a mainstream gas model, it can go typically one of two ways: It can feel like the automaker is trying too hard, or it's apparent that the car should have been this way all along. The Toyota Avalon Hybrid falls into the latter category. The large and premium car markets are overwhelmed with try-too-hard hybrids, but the Avalon Hybrid just works.

With an MSRP of $38,100, the 2016 Toyota Avalon Hybrid costs $5000 over the regular gas version, which offers near best-in-class fuel economy (but is considerably short of the Hybrid’s).

We tested the Avalon Hybrid Limited, the model’s top trim level, with an MSRP of $41,950. This model incorporates almost all available options, although the Toyota Safety Sense package adds $500 and there’s an array of optional dealer accessories. Fully loaded, with delivery fees, the 2016 Toyota Avalon Hybrid Limited tops out at just over $43,000, putting it within shouting distance of some midsize luxury sedans.

The 2016 Toyota Avalon Hybrid makes a punchy 200 horsepower, courtesy of its 2.5-liter 4-cylinder engine paired to an electric motor. Like most new hybrids, a continuously variable automatic transmission is compulsory, and it's very smooth. The Avalon Hybrid can lag a bit at take off, but again, this is typical for a hybrid, and it doesn’t take much time to get accustomed to this effect. EPA ratings come in at 40 MPG city and 39 MPG highway.

During our test drive, on a mix of city, highway, and suburban roads, we found that the Avalon Hybrid often shifted into EV mode—discerned by careful monitoring of the real-time fuel monitor, not a noticeable change in driving dynamics. This is a good thing because it means the Avalon Hybrid is efficient even when the driver is being rather casual about maximizing fuel economy. Compared to the Toyota Prius’ fuel-use guidance, which feels downright hostile at times, the Avalon Hybrid just seems easy. It’s not as efficient as a purpose-driven hybrid such as the Prius, but it’s a good option for drivers who don’t care to gamify hypermiling and don’t want to be constantly shamed by a gauge cluster.

For this year, the Toyota Avalon Hybrid gets refreshed front-end styling, bringing it more in line with the rest of the brand’s lineup. The Avalon Hybrid was last redesigned in 2013, though, so for the most part, it still looks and feels rather new. In general, this large sedan’s exterior blends into the crowd without seeming dull, old, or outdated.

The Avalon Hybrid Limited comes standard with HID headlamps and LED daytime running lights. During the day, these sharp-looking lights provide a nice visual contrast to the car’s bulky front bumper; at night, they provide crisp illumination for the road ahead. The headlights are automatic, too, which is a nice touch that only adds to this luxurious Toyota's upscale feel.

The 2016 Toyota Avalon Hybrid comes standard with leather upholstery, and the front seats are power-adjustable and heated. Move up a trim level or two, and you’ll get upgraded leather, heated seats all around, and ventilated in front.

The Avalon Hybrid Limited’s cabin is quite comfortable, with seats that are supportive and easy to adjust, plus all the controls within easy reach. There's a nice and natural feel to the spacious 5-seat cabin. It's not ostentatious; it's just nice. It’s easy to get a feel for this Toyota hybrid after just a few minutes.

The Avalon Hybrid Limited quickly recognized an iPhone 5S as soon as it was connected via USB. The interface was easy to use, although it got a little glitchy a couple times - which, to be fair, could have been the phone’s fault. A new song would show the clock counting down, but the audio wasn’t coming through over the speakers, however, simply tapping and restarting the song fixed it. Unfortunately, we couldn’t test the wireless charging pad. Overall, the infotainment system was super easy to learn and worked well except for the glitches mentioned above.

As the top trim level in the Avalon Hybrid lineup, the Limited comes nearly fully loaded with the features as mentioned earlier. The exception is the Toyota Safety Sense package, which costs an extra $500 and adds several active safety and driver assistance functions: automatic high beams, lane departure alert with steering assist, a pre-collision system with pedestrian detection, and adaptive cruise control.

Toyota’s safety engineering is buttoned down, especially in a family-friendly sedan like the Avalon Hybrid. It aces the routine crash tests, earning a 5-star overall rating from the NHTSA and a Top Safety Pick+ rating from the IIHS. It’s also a good choice for families with young children. We didn’t test it, but the Avalon Hybrid’s LATCH child seat attachment hardware earns an Acceptable rating from the IIHS, meaning that it’s reasonably easy to use. There are two full sets of LATCH hardware, one on each of the rear bench’s side seats, and the middle position adds a partial set of anchors.

A rearview camera is standard on every Avalon Hybrid. It's easy to use, but the top of the frame is occupied by the top edge of the license plate—a minor gripe, not a deal-breaker. There are also plenty of optional safety and driver assistance features, such as adaptive cruise control, forward collision warning, blind-spot monitoring, lane-departure alert, and rear cross-traffic alert.

The 2016 Toyota Avalon Hybrid Limited doesn’t really do anything extraordinary or unexpected; in fact, that’s what we liked most about it. For a hybrid sedan, the Avalon Hybrid Limited’s coolest feature is really just its simple and easygoing nature. The infotainment system was pleasant and easy to use; I plugged in my phone to charge it, and it popped up on the screen as a source for music. Nice and easy. I had the choice of tapping over to my phone as a data source or just letting it charge. Many other cars, including Toyota’s own Prius, make such a simple action too complicated, assuming I want more out of the interaction than I actually do. (It should be this easy on all modern cars, but it isn’t.)

Although some may think it looks kind of goofy, we loved the Parisian Night Pearl exterior finish applied to our test car. Subtle in shade but glorious in direct light, this super sparkly paint lent a touch of glam to an otherwise mature and responsible navy blue.

This Autobytel editor drove the 2016 Toyota Prius Four Touring just two weeks before this test of the Avalon Hybrid Limited. I’m impressed with how much the Prius has improved, particularly its fuel economy and its “normalness.” But I found that vehicle a bit overwhelming, with just too much crammed into a small space in front of the driver. The Avalon Hybrid Limited, on the other hand, manages to pack in most of the same content without the same effects. In short, the Avalon Hybrid feels more mature.

The Avalon Hybrid Limited and Prius Four Touring aren’t directly comparable; we’re talking about a large sedan with a hybrid drivetrain shoehorned in, as opposed to a compact hatchback designed from the get-go as the most efficient hybrid on the market. But it's the best comparison I can make at the moment, and it drives home this point: If you want a fuel-saving commuter, get a Prius; if you want a refined and comfortable family sedan with extraordinary fuel efficiency, the 2016 Toyota Avalon Hybrid is your car. 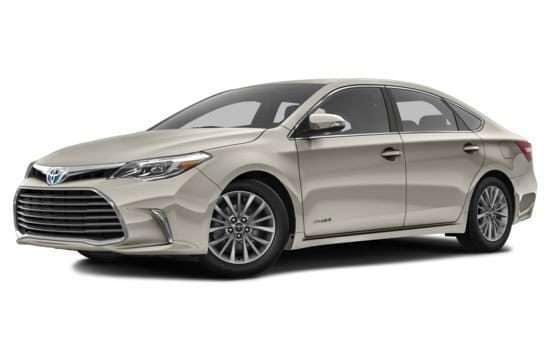