The visually refreshed Toyota 4Runner gets a thorough overview in this Autobytel video review with Chris Wardlaw. The Toyota 4Runner Limited is a solid vehicle for family adventures, as Chris describes, although the 4Runner’s thirsty engine makes for frequent and expensive fuel stops. The Limited model of the 4Runner features a styling treatment that’s heavy on the chrome, which is a stark contrast to more rugged trim levels of the 2014 Toyota 4Runner. Exclusive 20-inch wheels also imply that the 4Runner Limited might be better suited to the roads than the terrain. However, like other versions of the 2014 4Runner, the Limited features standard skid plates to protect the vehicle’s underbody during off-road exploration, so the vehicle is capable of such feats, even if the shiny trim seems to discourage it. Equipped with a 4-liter V6 engine, paired to a five-speed automatic transmission, the rear-wheel-drive 4Runner Limited can power over plenty of landscapes. A four-wheel-drive system is optional on the Toyota 4Runner Limited, a full-time system with a locking center differential. In comparison, other trim levels of the 2014 4Runner offer only part-time four-wheel-drive. The Limited also provides an exclusive adaptive suspension system. Optional third-row seating provides a little extra space for a big family, but seriously compromises cargo space, which means the 2014 Toyota 4Runner Limited might not be right for everybody. 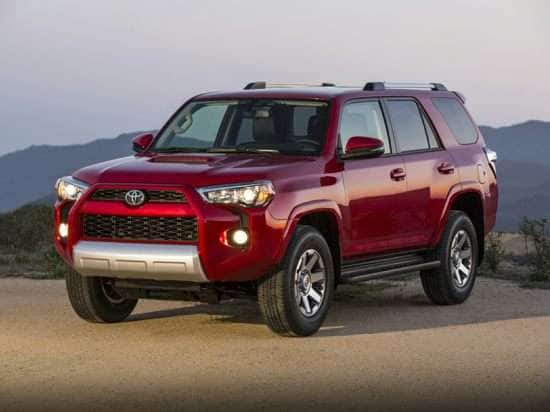