Safety has long been a top reason for purchase for auto shoppers, and today’s customers benefit from an increasingly wide range of high-tech features like blind-spot warning systems, adaptive cruise control, rear cross-traffic sensors, etc., etc. But even among sport-utility vehicles and crossovers—which already tend to do better in crashes because of their relatively large size—some choices stand out for being particularly protective of their passengers. For example, as of this moment, customers looking for safe SUVs in 2012 will find just 10 that have received both five-star overall safety scores from the National Highway Traffic Safety Administration (NHTSA) and Top Safety Pick Status from the Insurance Institute for Highway Safety (IIHS).

Thus, those were the ones that also have garnered a place on Autobytel’s own list of the Top 10 Safest SUVs of 2012.

There are a few things to keep in mind when looking at our roster of safe sport utility vehicles for 2012, however—like the fact that not all of the current crop of entries have been tested by both organizations. Consider: Premium players like the Audi Q7, Mercedes-Benz GL- and GLK-Class, and Land Rover Range Rover Evoque have not been rated by NHTSA, and probably won’t be, because the organization tends to focus on testing higher-volume models. On the other hand, some of the winners here are 2013 models that earned their recognitions for the 2012 selling season, but have not seen significant changes—or been tested again—in the interim.

But now it’s on with the show!

The General’s three big crossovers all brothers under the skin and all likewise combine to earn a spot among our Top 10 Safest Sport Utility Vehicles of 2012. All also get some notable style upgrades for 2013, along with an enhanced version of the MyLink entertainment and connectivity system. But the big news on the safety front for the Buick Enclave, Chevy Traverse and GMC Acadia is the debut of an industry-first front-center side airbag that was designed to protect the driver and front-row passenger from impacts to the opposite side of the vehicle.

Further safety enhancers for our first trio of safe SUVs for 2012 include a standard rearview camera system along with available side blind-zone alert and rear cross-traffic alert.

Safe SUVs for 2012 don’t get much more striking than the Cadillac SRX. But its big bold grille, along with updated style cues like front LED light pipes, are complemented by an equal attention to safety. In fact, this member of the list of Top 10 Safest SUV for 2012 welcomes two new driver-assistance packages that provide an extra layer of peace of mind with the brand’s Safety Alert Seat technology (vibrating the driver’s seat to warn of potential safety hazards), Automatic Front and Rear Braking, adaptive cruise control, and more.

The 2013 Cadillac SRX also sets the pace among our safe SUVs of 2012 with an exclusive Auto-Dry Brake system that helps remove excess moisture from the brake rotors in wet conditions, for improved stopping power regardless of the weather.

The next-gen Ford Explorer seems to have picked up right where the old-school model left off, becoming one of the most popular full-size crossovers in the country. No doubt helping matters are the kind of features that earned the Blue Oval product a place on the Autobytel roster of safe SUVs for 2012: Like the industry’s first inflatable rear safety belts and Curve Control, designed to help the Explorer retain its composure under hard cornering—or anytime a little help is needed to get up around the bend.

Also joining the team of top 10 safest sport-utility vehicles of 2012 is the Honda CR-V—bolstered by Honda’s Advanced Compatibility Engineering (ACE) body structure. It relies on a unique design, as well as plenty of high-strength steel, to help manage crash forces for optimum passenger protection. Then, in addition to typical safety features such as stability control, a rearview camera, dual-stage airbags, and anti-lock brakes, Honda’s choice among the safe SUVs of 2012 also delivers touches like a standard expanded-view driver’s mirror and a front-end design tailored to reduce potential pedestrian-impact injuries.

All of which helps explain why the Honda CR-V—in addition to being one of the top 10 safest sport utility vehicles of 2012—also just earned a best resale value award from Kelley Blue Book’s KBB.com website.

Hyundai’s rapid rise to prominence in the U.S. marketplace has been backed by a strong commitment to safe vehicles, as is evidenced by the all-new Hyundai Santa Fe Sport. Cementing its place as one of the Autobytel-approved safe SUVs of 2012, the five-seat crossover delivers a comprehensive Vehicle Stability Management system that integrates standard stability control and the brand’s Motor-Driven electric Power Steering (MDPS), as well as a cutting-edge anti-lock brake system with discs at all four corners, electronic brake-force distribution and brake assist. When the Santa Fe Sport is configured with all-wheel drive, torque- and brake-vectoring also are onboard.

Finally, thanks to Hyundai’s Blue Link telematics platform—standard on the Santa Fe Sport—customers can rely on features like automatic crash notification, enhanced roadside assistance service and a “panic button” for emergency assistance.

Of course, all occupants will benefit from the Sportage’s steel side-impact door beams, located in all four doors, as well as specially reinforced A and B pillars, to help optimally manage crash forces.

The Lexus RX received a wealth of upgrades for the 2013 model year, both inside and out, and naturally, this included some additional standard safety features: Hill-Start Assist Control, to prevent the RX from rolling backward when stopped on an incline; active front headrests, which can help lessen whiplash injuries in certain scenarios; and Smart Stop Technology, designed to cut engine power if both the gas and brake pedals are pressed at the same time (also in certain driving scenarios).

But it’s likely that the Lexus would have ended up on our Top 10 Safest SUVs of 2012 roster anyway, since it already provided 10 airbags in a best-in-class airbag system, a blind-spot monitor, rain-sensing wipers, anti-lock brakes, vehicle stability control and a pre-collision system. Thatlatter technology leverages a radar sensor capable of detecting a potential front-crash situation, and can then prepare the vehicle for the collision by retracting the front seatbelts and pre-pressurizing the brake system for increased stopping power.

The Toyota Venza may not be everyone’s idea of an SUV—or even a crossover—but it certainly has the protective measures needed to claim a spot among our Top 10 Safest Sport Utility Vehicles of 2012. And playing a starring role in the Venza’s safety story is Toyota's STAR Safety System. A standard feature of all Toyota products, the system brings together enhanced vehicle stability control, traction control, anti-lock braking, electronic brake-force distribution, brake assist and smart-stop technologies to provide award-winning levels of safety protection.

Also in the mix from the safety department: Active front headrests, front seatbelt pretensioners, hill-start assist, blind-spot mirrors, and seven airbags, including one to protect the driver’s knees.

And you know what? With essentially the same amount of available cargo room as the Hyundai Santa Fe Sport or Honda CR-V, the Venza actually does the crossover thing just as well as some of our other safe SUVs for 2012.

Now, here’s an example of the challenges of basing Autobytel’s honor roll of  Top 10 SafestSUVs of 2012 on third-party testing: The Volvo XC60 garnered a spot on our list—as expected—but its bigger brother, the Volvo XC90, wasn’t tested by NHTSA. Thus, even though the latter is an IIHS Top Safety Pick, it doesn’t qualify for our roster; and the mid-sized Volvo XC70 hasn’t been evaluated by either organization.

As for the XC60, it packs on just about every safety technology on the market today, including all the usual suspects, and then tacks on exclusives like City Safety, designed to help drivers avoid low-speed, urban-type collisions; Pedestrian Detection, which can identify if a pedestrian steps out in front of the XC60 and then help mitigate a potential collision; and industry-first two-stage integrated booster seats with adaptive seatbelts.

Okay, we did have to stretch the rules a bit to include the final member of our list of safe SUVs for 2012, but the Saab 9-4X was the only other 2012 model-year SUV/crossover to capture a 5-star overall safety rating from NHTSA and achieve Top Safety Pick Status with the IIHS—which, as we all know, wasn’t quite enough to prevent a bitter-Swede ending to our list of Top 10 Safest SUVs of 2012. 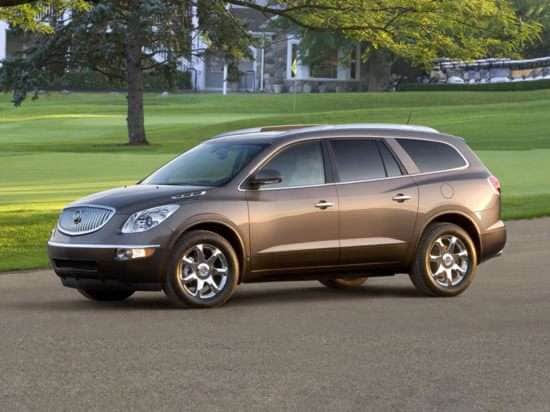