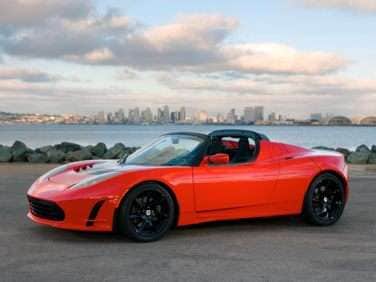 All About Tesla Roadster

Though Tesla currently designs and builds fully electric cars from the ground up, the Roadster was not an all new design. Introduced in 2006 and produced between 2008 and 2012, the Tesla Roadster was assembled from Lotus Elise bodies and Tesla’s exclusive all-electric drivetrain. Tesla Motors contracted with Lotus Cars to supply 2500 Elise car bodies, an arrangement that expired at the end of 2011, so it was no surprise that Tesla stopped taking orders for the Roadster in the summer of 2011, and the final Roadster was completed in January of 2012. The Roadster was available in many markets around the globe throughout its production run; an allotment of Roadsters was even built in right-hand-drive format for select markets. A Sport version of the Roadster was also introduced midway through the car’s production run, boasting a more powerful motor that improved the car’s 0-60 acceleration time from 3.9 to 3.7 seconds, and increased horsepower from 248 to 288. Tesla Roadsters featured a single speed fixed gear transmission. The Tesla Roadster’s miles per gallon equivalency rating (the standard for determining “fuel efficiency” for fully electric cars) was rated at 120 miles per gallon. The lithium-ion battery pack (or Energy Storage System, in Tesla’s terminology) took three and a half hours to fully recharge. The Roadster could be recharged using 120-volt standard household current or optional units that provided 240-volt current for maximum speed recharging.

Foreshadowing Tesla Motors’ strategy in the years to come, the Tesla Roadster was unapologetically performance oriented and featured plenty of creature comforts, which perhaps helped to alleviate some of the sticker shock. Such features and options included comfortable seating, directional forged wheels, power control hardware to improve the driving experience, a touchscreen display with a back-up camera, and upgraded insulation materials for noise reduction in the cabin. Tesla’s follow-up to the Roadster, the all-new Model S, continued Tesla’s method of making fully electric vehicles seem more normal.