Premium EV Also Among Time’s Best Inventions of the Year

The sleek new 2012 Tesla Model S may not be earning much in the way of profits—yet—but it has won one of the first big prizes of the automotive awards season: AUTOMOBILE Magazine recently named the Tesla Model S its 2013 Automobile of the Year. And while the car’s incredible performance certainly helped matters, as did its 300-mile all-electric driving range, the publication also called out the “professionalism” of the Model S and noted the high levels of attention to detail that obviously went into building it.

“Winning AUTOMOBILE Magazine’s ‘Automobile of the Year’ award is an important milestone for Tesla because it underscores our goal to build a great car, not just a great electric car,” said Elon Musk, Tesla Motors co-founder and CEO. “Winning this award is great recognition of what we’ve accomplished as a company, and we’re thrilled to receive this endorsement from one of the industry’s most respected authorities.”

In addition, as a further example of the car’s breakthrough appeal, Time magazine added the Tesla Model S to its list of “Best Inventions of the Year.”

What’s all the hoopla about? Let’s take a look …

The 2012 Tesla Model S is the automaker’s second production offering, after the Tesla Roadster, but while the latter was essentially an electrified Lotus, the former was designed entirely in-house by Tesla and developed to be an electric vehicle right from the start. This allowed the company to optimize the car's layout for EV performance, right down to a 50/50 weight distribution, while also delivering all of the “typical” functionality you’d expect in a premium sport sedan. Of course, the package is then complemented by highly untypical features like a 17-inch touchscreen.

But the real difference-maker here is the car’s powertrain, which is available in a number of different configurations, at different price points, to make the Tesla Model S accessible to a fairly wide range of potential buyers. Thus, an entry-level model will be available with a 40-kWh battery pack for $49,900 (after a $7,500 federal tax credit), with the vehicle able to run for about 160 miles on a single charge (at 55 mph), reach 110 mph, and go from 0-60 in a brisk 6.5 seconds.

There also will be 60- and 85-kwh batteries available, with the range-topping Tesla Model S Performance version packing 416 hp and 443 lb.-ft. of torque, a top speed of 130 mph, the ability to rocket from 0-60 in just 4.4 seconds, and a 300-mile all-electric driving range. Charging times are pretty fast as well, thanks to available technology that allows owners to “fill up” with electricity at a rate of 62 miles of range per hour; even the standard 240-volt setup enables the vehicle to charge with enough electricity per hour to go 31 miles.

Of course, at this stage in the game, Tesla is still looking to ramp up production of the starter models and is currently selling just the 85-kwh versions—which open at $84,900 after the federal tax incentive.

The two biggest drawbacks of today’s electric vehicles are range and price, and the Tesla Model S definitely goes a long way toward eliminating worries over the first. But what may be more surprising is that the car also stands up quite well in terms of costs when compared to its more traditionally powered rivals.

Consider the tale of the tape when comparing the Tesla Model S with the Audi A7 (another stylish five-door sedan/liftback) and the Infiniti M Hybrid (another “green” sport sedan): 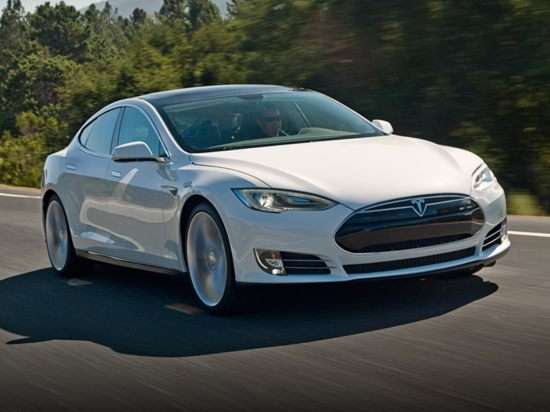