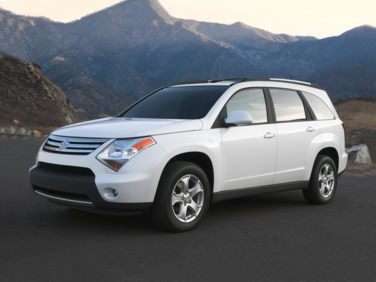 All About Suzuki XL7

Classified as a mid-size SUV, the Suzuki XL7 (originally written as "XL-7") is currently the largest vehicle in the Suzuki vehicle lineup. The vehicle was originally introduced for the 2002 model year and is presently in its second generation of body design. The new design debuted for the 2007 model year. The XL7 directly competes with popular SUVs such as the Honda Pilot, Toyota Highlander and GMC Acadia.

The current second generation design of the XL7 was the result of a collaboration between Suzuki and GM. It shares the same platform as the Pontiac Torrent, Chevrolet Equinox and Saturn VUE. A chrome-slotted grille and diamond-shaped headlights dominate the front-end of the vehicle. Overall, the SUV includes a much sleeker, rounded exterior than the first generation design. Exterior dimensions include a length of 197.2 inches, width of 72.2 inches and height of 68.9 inches.

With three rows of seating, the XL7 comfortably seats up to seven passengers. A 2-row, 5-seat configuration was available until the 2009 model year. Front and rear headroom are 41.3 inches and 40.0 inches, respectively. Legroom is adequate, with a maximum of 41.2 inches in front and 38.8 inches in the rear. Cargo volume for the XL7 tops out at 95.2 cubic feet.

All XL7 trims come standard with a 3.6-liter DOHC V6 engine that delivers 252 horsepower at 6,400 rpm and 243 lb-ft. of torque at 2,300 rpm. A 6-speed automatic transmission was introduced for the 2009 Suzuki XL7 and offers 16 mpg in the city and 23 mpg on the highway. Maximum towing capacity is 3,500 lbs. Other notable performance features that are available include all-wheel drive, load-leveling suspension and traction control.

The Suzuki XL7 comes standard with dual front airbags, side curtain airbags, antilock brakes, brake assist, daytime running lights and an anti-skid system. In crash tests performed by the NHTSA, the XL7 SUV earned a 5-star rating in the categories of driver front impact, passenger front impact, driver side impact and rear passenger side impact. A 4-star rating was awarded in the categories of 4WD rollover and rollover resistance.