Low price and loaded, just the way we like it

Suzuki SX4 Sedan – 2008 Review: We’re not sure exactly when it happened...it crept up on us so slowly that we hardly noticed...but inexpensive cars stopped being penalty boxes a few years ago. Case in point: the Suzuki SX4 Sport sedan. Costing only $16,500 as equipped, our test car included equipment like power door locks, windows and mirrors. But it also had an excellent nine-speaker audio system, automatic climate control, excellent fit and finish, sophisticated styling and even a little dose of driving fun. It’s no cut-rate Lexus, but the SX4 is definitely a lot of car for the money, one that would be high on our budget car lists. 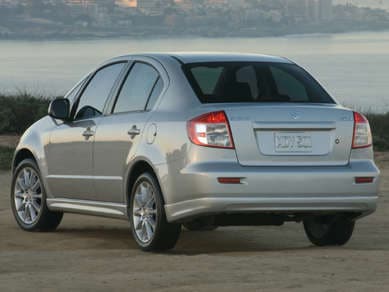 What We Drove
Our 2008 Suzuki SX4 Sedan boasted the Touring package, and came with nothing checked on the options sheet. The $16,495 price included a $625 destination charge, and that was it. However, the standard equipment level on this package is impressive: Automatic climate control; an audio system with a six-CD changer with MP3/WMA capability and nine speakers including a subwoofer; power windows, locks and outside mirrors; genuine aluminum interior accents; remote keyless entry and a leather steering wheel with cruise and audio controls on the spokes. Not too shabby for a little car.

Performance
In the world of cheap cars, performance is relative. Still, we’d hoped for more from this little ’Zook, considering its aggressive looks. The engine makes plenty of exciting noises, ripping to redline with a healthy bark, the crisp shifter snapping off gear changes flawlessly. Yet you’re in third before you hit 60 mph, and passes at freeway speeds without downshifting can be timed with a sundial. Rev it to redline and there’s enough scoot, but flogging it like you hate it just to make headway gets old quickly, and the last 1,000 rpm before redline sounds strained.

Handling
Stubby cars like the SX4 often return a choppy ride. Luckily, this isn’t the case with this little Suzuki. The freeway ride was considerably smoother than we had expected. Handling suffers as a tradeoff though. The body leans considerably, and while it has plenty of grip thanks to Dunlop all-season performance tires, it’s not quite as rewarding to drive quickly as, say, a Honda Fit. Part of this is because of the steering, which was extremely quick and suffered from a poor on-center feel. This meant it was twitchy going down a straight road, and it was easy to dial in too much steering through turns. 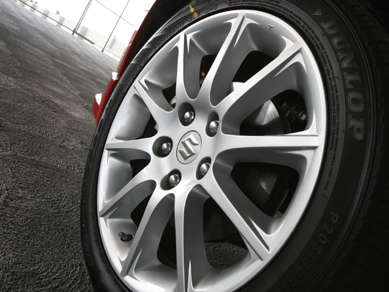 Fun to Drive
The SX4 isn’t the fastest, best handling, most responsive or sportiest car out there, even at its price. Still, we found ourselves having fun behind the wheel. All of us wished for more power from the 2.0-liter, and better responses would be a step up as well. However, the car’s somewhat peculiar dynamics were also part of its fun, like a friendly pet dog that always wants you to throw the Frisbee; sure it gets annoying, but its heart is in the right place, so you can forgive it more easily.

Front Comfort
Most of us had a hard time finding a comfortable seating position in the SX4. There’s plenty of head, leg and shoulder room, but the steering wheel-to-driver’s-seat ratio is all wrong. If you’re built with long arms and short legs – think of an orangutan – you’ll be fine, otherwise you’re in for a lot of fidgeting. A telescoping steering wheel would do wonders. The seat itself is covered in soft but durable feeling fabric, and although the bottom cushion is too short for long-legged drivers, the overall shape is good. We like the leather covered steering wheel, but wish that the door-mounted armrest was padded. 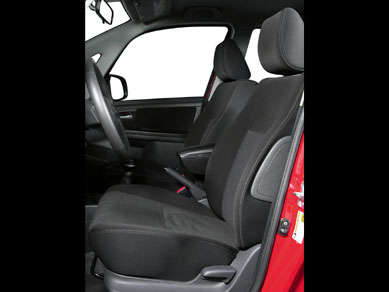 Rear Comfort
Like the front, the rear seat is fine for shorter legged occupants. Knees will touch the front seatbacks otherwise, but unless you’re more than six feet tall, nothing more than your hair will ever touch the stratospheric ceiling. There’s not a lot of shoulder room, so although five can theoretically fit, they’ll have to watch their hands to avoid harassment lawsuits from their seatmates.

Interior Noise
One of the places manufacturers cut costs on inexpensive cars is in sound deadening, and Suzuki is no different. You hear plenty of engine noise at all speeds, wind noise from the windshield wipers and large outside mirrors at speed, and road noise above anything more than a slow-commute crawl. That said, in the world of cheap cars this is about as quiet as it gets, and the youngins who will likely make up a good chunk of SX4 buyers won’t mind cranking the excellent nine-speaker audio system to drown out the other noises.

Visibility
Couple a tall roof with big windows and you usually end up with excellent visibility. It turns out the SX4 is only pretty good because of two blocked views. The first is in front; Suzuki tried to compensate for the far-flung windshield with a small quarter window between the windshield and the front door glass. Taller drivers wind up looking at the top of this small “A” frame, defeating the purpose. In back, that little upkick in the rearmost pillar evokes a BMW sensibility, but it’s hard to see around. Luckily, the large outside mirrors and big rear glass mostly compensate for this. 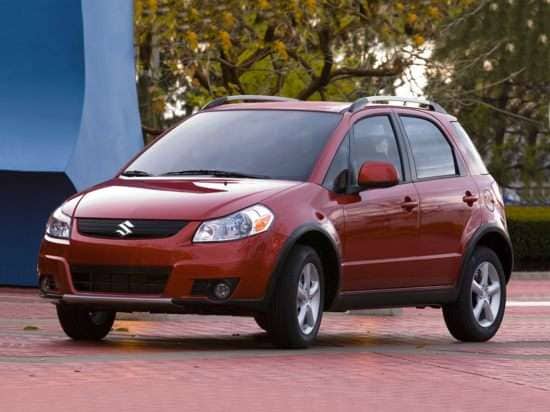