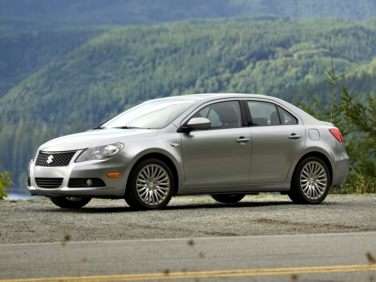 All About Suzuki Kizashi

Suzuki appeared to have high hopes for the Kizashi, since the name is a Japanese word that can mean “omen,” “warning,” or, more optimistically, “something great is coming.” Suzuki had indicated that the Kizashi was designed to be its new flagship model. To gauge public opinion and help refine the finished model, Suzuki showed the Kizashi in several concept stages before its official release. The first concept, which was shown at the 2007 Frankfurt Motor Show, featured a 2-liter turbo diesel drivetrain with all-wheel-drive and 21-inch alloy wheels. Then, the Kizashi name was slapped on a sporty crossover wagon with a V6 engine and all-wheel-drive, and that version was introduced on Suzuki’s home turf at the 2007 Tokyo Motor Show. In 2008, Suzuki took a V6, 300 horsepower, all-wheel-drive, 21-inch-wheeled vehicle to the New York Auto Show.

When the Suzuki Kizashi was actually released, it took the form of a front-wheel-drive sedan with a 2.4-liter four-cylinder drivetrain. The engine yielded 185 horsepower and could be paired with a six-speed manual transmission or a CVT option. Though front-wheel-drive was standard, Suzuki had indicated that it was considering making an all-wheel-drive version of the Kizashi available in certain markets. Kizashi buyers could opt for 17-inch or 18-inch alloy wheels, and cloth or leather seating trim in the cabin. A Rockford Fosgate audio system, which included iPod connectivity and Bluetooth wireless integration, was also available.

After the Suzuki Kizashi’s official introduction and release for sale, Suzuki continued showing concepts that bore the Kizashi nameplate. At the New York International Auto Show in 2011, Suzuki displayed the Kizashi Apex, a version of the Kizashi designed to appeal to performance oriented buyers and inspired in part by Suzuki’s motorcycle and powersport lineup. The Kizashi Apex featured a new turbocharged engine, sporty wheels fitted with performance tires, and a motorcycle-inspired exterior finish. The Suzuki Kizashi EcoCharge was a gasoline-electric hybrid version of the Kizashi, also shown at the 2011 New York International Auto Show, that featured a new hybrid drivetrain powered by a 2-liter gasoline engine paired to a 15 kW belt-driven electric motor, for a combined power yield of 144 horsepower. The Kizaski EcoCharge also employed common hybrid power-saving strategies such as a six-speed automatic transmission, stop-start engine technology to save power at idle, a regenerative braking system, and low rolling resistance tires. The Kizashi EcoCharge was estimated to yield fuel economy savings of 25 percent over the gasoline version of the Kizashi, although Suzuki Motor Corporation did not remain in the United States long enough to benefit from this new long-term strategy.