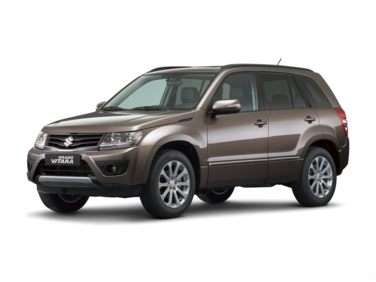 All About Suzuki Grand Vitara

The Suzuki Grand Vitara is a small, 4-door SUV that has been in production since 1999. The vehicle was initially intended to serve as a replacement for the Suzuki Sidekick. The Grand Vitara is currently in its second generation of body design. Introduced for the 2006 model year, the new Suzuki Grand Vitara competes with vehicles such as the Saturn VUE, Kia Sportage and Honda CR-V. A rebadged version of the vehicle, known as the Chevrolet Tracker, was also sold in America through the 2004 model year.

Major upgrades to the interior of the new Grand Vitara have given the current generation a more solid and welcoming environment. The roomy cabin design boasts plenty of cabin room in both the front and rear. Front headroom is a comfortable 40 inches, while 38.2 inches of headroom can be found in the backseat. For its class, the Suzuki Grand Vitara is a bit short on cargo room, with a total of 24.4 cubic feet of storage space available. However, with the 60/40 backseat folded down, the vehicle potentially offers up to 68.9 cubic feet of storage.

The Luxury trim tops out the lineup with leather upholstery, heated front seats, heated mirrors, 17-inch wheels and a universal garage door opener. All trim levels are also available in all-wheel drive versions, which add such features as a 2-speed transfer case and locking center differential.

The lone engine available for the Suzuki Grand Vitara is a 2.7-liter V6. Paired with either a 5-speed automatic or 5-speed manual transmission, the Grand Vitara musters 185 horsepower at 6,000 rpm and 184 lb-ft. of torque at 4,500 rpm. Other performance features, such as traction control, are intended to improve the vehicle's off-road capabilities. Maximum towing capacity is 3,000 lbs. EPA fuel economy is low when compared to other compact SUVs. On the highway, the Grand Vitara offers an estimated 21 mpg. In the city, the 5-speed automatic delivers 17 mpg and the 5-speed manual offers 16 mpg.

Suzuki has outfitted all Grand Vitara trims with dual front airbags, front side airbags, side curtain airbags, antilock brakes, daytime running lights and an antiskid system. In NHTSA crash tests, the SUV earned a perfect five stars in the categories of driver side impact and rear passenger side impact. For all other categories, the vehicle received four stars.

The 2009 Suzuki Grand Vitara is a carryover from 2008. The 2009 Grand Vitara can be ordered in base, Premium, XSport and Luxury trims. The base and Premium versions of the SUV are powered by a 2.4 liter, 4-cylinder engine that produces 166 horsepower and 162 lb-ft of torque. A 5-speed manual or 4-speed automatic transmission are available, and the Grand Vitara Premium also throws in the option of four-wheel drive. Fuel mileage is rated at 19 miles per gallon in city driving and 26 miles per gallon on the highway. Buyers of the XSport and Luxury trims can select a 3.2 liter V6 to replace the 4-cylinder. This heartier unit offers 230 horsepower and 213 lb-ft of torque. The 4-speed automatic becomes the exclusive transmission option, and all-wheel drive is again an option. Fuel economy is a similar to the smaller engine, coming in at 18 miles per gallon around town and 24 miles per gallon for the rear-wheel drive versions of the SUV.

The second-generation Grand Vitara hasn't changed much since it debuted in 2005. Overall, the new design is more refined than the previous model, with more rounded edges and sleeker styling. Short overhangs in the front and rear contribute to the vehicle's off-road performance. The vehicle seats up to five passengers and has overall dimensions that include a length of 176 inches, width of 71.3 inches and height of 66.3 inches.