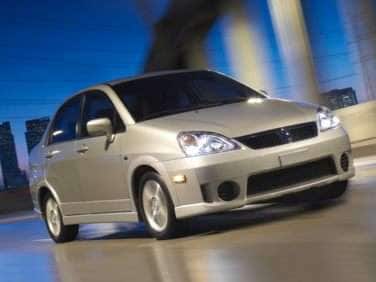 All About Suzuki Aerio

The Suzuki Aerio first appeared in 2002 as a compact sedan or four-door hatchback wagon. The compact lasted six years before being discontinued. Not on any popular car lists, the Suzuki Aerio had it’s advantages, although when compared with more popular, better selling models, the Aerio fell short.

A roomy cabin, low starting price and available all-wheel-drive made the Suzuki Aerio attractive to those on a budget looking for a simple car for a daily commute. With decent gas mileage, more than enough headroom, a low price and a surprising amount of trunk space, the Aerio placed somewhere in the lower middle when compared to all other cars in its class. While being comfortable and smooth for driving, the Aerio had a problem with excess body roll when cornering because of the tall stance.

The Suzuki Aerio offered ample headroom and cargo space. The rear seats of the Aerio hatchback lowered when not in use and created 64 cubic feet of cargo room. The head, leg and cargo space put the Aerio in front of other cars in its class for these features. The quality and layout of the interior were noted to be inferior of almost all competitors in the class.

The Suzuki Aerio started out with a 2.0-liter inline four-cylinder engine pushing 141 horsepower. A slight increase in horsepower in the 2003 models raised it to 145 horsepower. In 2004 the 2.0-liter engine was replaced with a 2.3-liter engine which increased the horsepower to 155. All entry-level models came with a 5-speed manual transmission. A four-speed automatic transmission was optional on the base models and came standard on higher trim levels. Front wheel drive was standard for the Aerio and in 2003 all-wheel-drive was an option, but only for models equipped with the automatic transmission.

With the manual transmission, the EPA estimated fuel mileages are 25 mpg city and 31 mpg highway.

All Suzuki Aerios came with four-wheel antilock brakes, depowered airbags, passenger airbags and side airbags as standard safety equipment. These features were not enough to get the Aerio higher than a “Poor” rating from the IIHS in side-impact testing. In frontal-offset tests done by the IIHS, the Aerio earned a “Good” rating. The governmental crash tests conducted by the NHTSA handed the Suzuki Aerio four out of five stars for protecting the driver and three our of five stars for protecting the passenger.