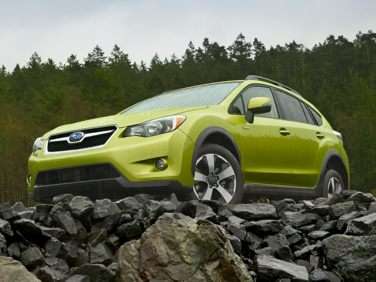 All About Subaru XV Crosstrek Hybrid

Subaru is an auto manufacturer that is a subsidiary of Fuji Heavy Industries, a Japan-based industrial and transportation company. The Subaru brand has earned a following for its rugged and reliable sport utility vehicles, wagons, and sport coupes. Subaru’s passenger cars are known for being equipped with all-wheel-drive as a standard feature. Subaru vehicles are available in a variety of global markets, and the brand tends to have a loyal fan base, especially in the northern climate areas of North America, where all-wheel-drive passenger cars and SUVs are particularly desirable. Subaru established Subaru of America in 1968 to manage operations for the United States and Canada region, and it is currently based in Cherry Hill, New Jersey. The Subaru XV Crosstrek is produced at a Subaru assembly facility in Malaysia.

The Subaru SV Crosstrek Hybrid is based on the compact Subaru Impreza, which was introduced in 1992. The Impreza has been available in several body styles, including a four-door sedan, a five-door hatchback, and a coupe. Throughout the Impreza’s life, its appearance became increasingly more sporty, and for its third generation, Subaru introduced the Subaru Outback Sport model of the Impreza. For the fourth generation, the Subaru XV name was introduced. It was first revealed at the Shanghai Auto Show in 2011, in concept form. The concept vehicle was a Subaru Impreza hatchback with a raised suspension and a sportier appearance marked by black and silver alloy wheels, an exclusive electric yellow-green exterior finish, and special seat upholstery with contrast trim that matched the car’s exterior color. The production version of the Subaru XV appeared later in 2011, at both the Frankfurt Motor Show and the Indonesia International Motor Show.

When the production vehicle was brought to North America at the 2012 New York International Auto show, it was announced that the model would be called the Subaru XV Crosstrek. It went on sale later that year as a 2013 model year vehicle. The first Subaru XV Crosstrek models were powered by a 148-horsepower 2-liter gasoline engine, paired to a five-speed manual transmission or a CVT. Subaru later revealed that the traditional gasoline version of the XV Crosstrek would be joined by a gasoline-electric hybrid model, marking one of Subaru’s first forays into hybrid technology for its passenger vehicles. The Subaru XV Crosstrek Hybrid made its first appearance at the New York International Auto Show in the spring of 2013. Like the regular XV Crosstrek, the XV Crosstrek Hybrid boasts Subaru’s all-wheel-drive system. It’s powered by a 2-liter boxer engine similar to that found in the gasoline XV Crosstrek, but it’s mated to a permanent magnet electric motor and nickel hydride batteries, for a total yield of 160 horsepower. The drivetrain is completed by a CVT gearbox. Subaru says this hybrid drivetrain makes the XV Crosstrek Hybrid the most fuel efficient and the lowest emission all-wheel-drive hybrid crossover sold in the United States, at the time of its release. The Subaru XV Crosstrek Hybrid is rated by the Environmental Protection Agency for fuel economy of 29 miles per gallon city, 33 miles per gallon highway.