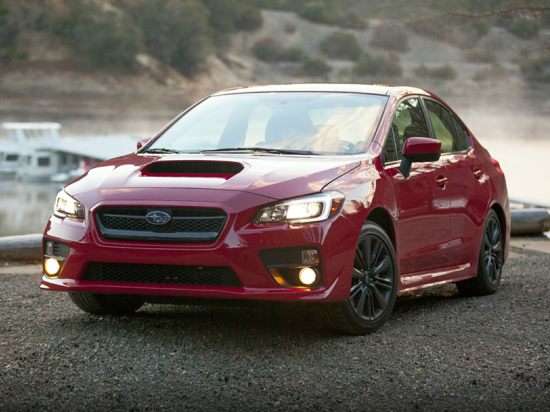 With a complete redesign of the performance-oriented WRX, Subaru officially separates it from the Impreza lineup, though the car remains based on the Impreza. Longer, heavier, and bigger inside, the new 2015 WRX is offered only as a sedan. The 5-door hatchback model is discontinued.

In the WRX, power and torque peak at lower revs, and a new 6-speed manual gearbox debuts. Subaru also expands the car’s appeal by offering an optional continuously variable transmission (CVT). The CVT includes paddle shifters and up to eight pre-programmed ratios. Active Torque Vectoring is also new, and the WRX gets larger front brakes and quicker electric steering.

All WRX models except the base version are available with a new 6.1-inch touchscreen infotainment and navigation system with a premium audio system.

Subaru sells the 2015 WRX in five levels of specification. Upgrading from base trim to the WRX Premium adds fog lights, a rear spoiler, heated side mirrors, a wiper de-icer, heated front seats, and a power sunroof. The WRX Limited is equipped with leather upholstery and LED headlights.

Choose the WRX STI for higher performance hardware, along with 18-inch wheels, integrated turn signal indicators in the side mirrors, performance seats wrapped in leather and Alcantara, and a dual-zone automatic climate control system. The WRX STI Limited is equipped with full leather, a power sunroof, and a premium audio system with Aha smartphone connectivity and services.

The 2015 Subaru WRX has a new, turbocharged, 2.0-liter 4-cylinder engine making 268 horsepower and 258 lb.-ft. of torque. All-wheel drive is standard, and buyers select between a 6-speed manual gearbox and a CVT with paddle shifters.

The WRX STI continues with the same turbocharged, 2.5-liter 4-cylinder engine as last year, one cranking 305 horsepower and 290 lb.-ft. of torque. It is paired to a 6-speed manual gearbox and AWD.

The WRX is rated to get 24 mpg in combined driving with the 6-speed manual transmission, and 21 mpg with the optional CVT. The WRX STI gets 19 mpg, according to the EPA.

The Insurance Institute for Highway Safety (IIHS) calls the 2015 WRX a “Top Safety Pick.” The NHTSA had not performed crash tests on the redesigned WRX as this summary was written.

Aside from the WRX’s robust powertrain technologies, it is a simple vehicle. A reversing camera is standard, and a 6.1-inch touchscreen infotainment/navigation system is optional, paired with a premium sound system and Aha connectivity.