When you look over the 2016 Subaru Legacy, it can be hard to see why so many customers seem to overlook it when shopping for a midsize sedan. After all, it’s the only car in the class with standard all-wheel drive—which is an increasingly popular feature for today’s drivers—plus the Legacy showcases strong safety and fuel economy ratings, and it even grades out near the top of the list for affordability. Yet despite these advantages and more, the No. 1 entry in the segment has been outselling the Subaru by more than 650 percent so far this year. So, what are all those other owners missing out on by skipping the Legacy? Read on and we will show you.

Perhaps the biggest benefit of the 2016 Subaru Legacy is its sheer value. Right off the bat, the car’s MSRP of $21,745 is lower than all other mainstream midsize sedans except the Chevy Malibu, and the Legacy is a noticeable $1,325 less expensive than the current Toyota Camry. And this isn’t a case where the Subaru comes with a manual transmission—like the Honda Accord—or roll-up windows. The value comes into play because Subaru supplies a significant amount of standard content at its relatively affordable price point, including not just all-wheel drive, but also a rearview camera that’s missing from the standard Malibu. Also standard for the entry-level Legacy: a Starlink multimedia system with a 6.2-inch display.

The 2016 Subaru Legacy is offered in three trim levels: from the basic 2.5i model, named to indicate its standard 2.5-liter engine; to the up-level Premium and Limited grades. Indeed, Subaru claims the current Limited edition serves up “the highest level of luxury ever” for a Legacy model. But even so, the range-topping Legacy starts at a relatively wallet-friendly $26,845 with its standard four-cylinder engine, while owners can opt for a Legacy Limited with a more powerful six-cylinder unit for $29,945. To put that into into context, top-of-the-line V6 rivals such as the Nissan Altima can start at $32,690—and that’s without a Harman Kardon audio setup that’s one of the Legacy’s lux touches.

The 2016 Subaru Legacy relies on its brand’s signature “boxer-style” engines, which have two banks of horizontally opposed cylinders, so that—with a little imagination—it looks like the pistons are “punching” at each other. The result is a more compact package than typical “V” or inline engines, allowing Subaru to mount its powerplants lower in the Legacy, for more nimble handling.

The Legacy’s standard four-cylinder engine then delivers 175 horsepower, 174 lb.-ft of torque and EPA ratings of 26 mpg city, 36 mpg highway, and 30 mpg combined—that’s better fuel-efficiency than for the standard, front-drive-only Toyota, Ford, Hyundai, and Kia. As for the Legacy’s available 3.6-liter, six-cylinder choice, that’s good for 256 horsepower, 247 lb.-ft of torque, and an EPA line of 20/29/23 mpg.

The exterior styling of the 2016 Subaru Legacy is rather subtle, especially given how dramatic a few of its rivals look. However, for some Subaru customers, that’s just another benefit, and the car does have unexpected standard cues, such as 17-inch wheels and aero-style body extensions. The Legacy also boasts a nicely detailed front end, for an aggressive road presence, although, it is a few inches shorter in length than the competition. At the rear, LED taillights and brake lights are standard, while the Legacy 3.6R Limited model upgrades to HID low-beam headlights up front, complemented by steering-responsive fog lights. These lights are standard on the 2.5i Limited, too, and will light up on the side toward which the Legacy is turning.

Thanks to some nifty engineering expertise, Subaru claims the Legacy “offers the largest cabin space in the midsize segment,” backed by 104.6 cubic feet of interior volume. Among the highlights here are the car’s unbeaten front headroom—which exceeds that of the Camry by more than two inches—and its rear-seat legroom. For second-row passengers, the Legacy delivers an extra two inches as compared to the Nissan Altima, and outstretches the Hyundai and Kia sedans by 2.5 inches. The Legacy’s large interior is balanced by the smallest trunk in the segment, at 15 cubic feet.

Subaru designers also rolled out an interesting appearance in the cabin, where the infotainment screen seem seems to tilt back, for easier visibility and a distinctive look.

The 2016 Subaru Legacy checks all the boxes for basic standard infotainment, including a 6.2-inch touchscreen, USB and auxiliary inputs, and Bluetooth for both audio streaming and hands-free calling. Voice-control navigation, naturally, is also available. There’s also a mid-range setup, with a 7-inch screen and six speakers, yet it’s the Legacy’s Harmon Kardon connection that will attract the audiophiles. Subaru actually provides two systems with premium components from Harman Kardon: one serves up 440 watts of power for eight speakers; and the second turns up the volume with 12 speakers and a 576-watt amplifier.

The 2016 Subaru Legacy logs in with particularly impressive grades for occupant protection, too, starting with a 5-Star Overall Safety Score from NHTSA. True, most rivals match that achievement, yet it’s the Legacy—but not rivals like the Chevy, Honda or Toyota—that earns five stars in all three of NHTSA’s individual sub-tests. It’s a similar story with the Legacy’s IIHS ratings: The Subaru sedan isn’t alone in the segment as a Top Safety Pick+, but neither the Toyota nor the Nissan received the highest possible grades for front crash-prevention technology. The Legacy did—courtesy of its comprehensive EyeSight safety bundle—and to be clear, the Legacy also scored the highest grades in all IIHS crashworthiness tests.

Standard Symmetrical All-Wheel Drive is a key selling point for the 2016 Subaru Legacy, since only one other rival even offers AWD, and that entry, the Ford Fusion, features a more typical system with the typical drawbacks compared to Subaru’s technology. For example, the Legacy’s setup is always engaged and working, while the Ford’s only activates after traction issues are detection. Nor can the Fusion’s unequal-length front axles deliver power as directly as in the Subaru’s symmetrical system. A further bonus: The Legacy leverages Active Torque Split assistance for enhanced grip and steering performance in the corners.

The 2016 Subaru Legacy is in an odd position in the marketplace: It’s got much of what many customers would seem to want out of a midsize sedan, but it’s still missing from a lot of consideration lists. Which means it's potential owners who are missing out, since the Legacy is relatively fuel-efficient and affordable, with great safety ratings and inoffensive good looks. On the other hand, and on the topic of appearances, when the 2017 Legacy lineup begins arriving this year, it will introduce a new Sport trim that will spice up the car’s looks considerably. 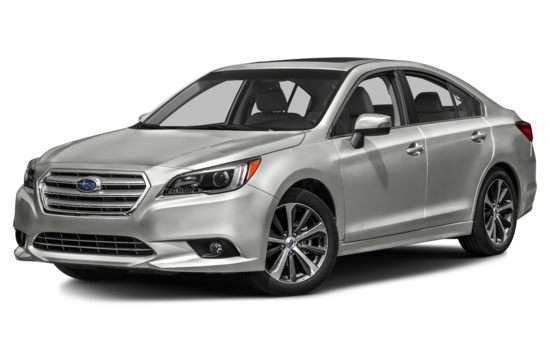