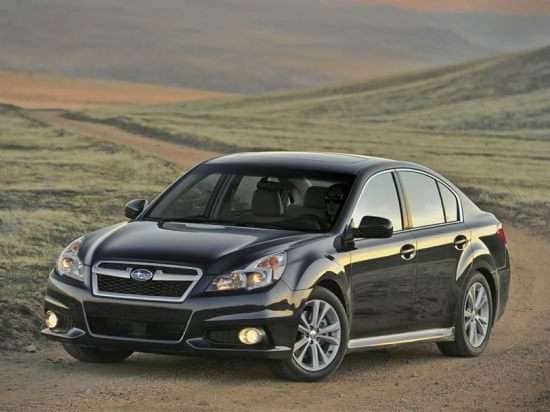 Changes for the 2014 Subaru Legacy:

After a significant refresh for the 2013 model year, Subaru further refines the 2014 Legacy. A new 2.5i Sport model added late last year continues for 2014, and both it and the 2.5i Premium can now be optioned with a navigation system. The 2.5i Premium also gets a bunch of new standard features and is now available with a reversing camera and Subaru’s EyeSight safety system.

All Legacies have all-wheel-drive, but the type of system installed is dependent on powertrain and transmission selection. The 2.5i with a manual splits power evenly to the front and rear wheels, while the 2.5i with a CVT has an Active Torque Split AWD system that transfers power to the rear wheels when the front wheels slip. A Variable Torque Distribution AWD system is standard for the Legacy 3.6R.

Any Legacy 2.5i with the CVT is rated to get 27 mpg in combined driving. Choose the manual gearbox, and that number drops to 24 mpg. Upgrade to the Legacy 3.6R, and the EPA estimates 20 mpg.

In crash-test assessments, the Legacy earns a 5-star rating from the National Highway Traffic Safety Administration (NHTSA), the highest score possible. The Insurance Institute for Highway Safety (IIHS) gives the 2014 Legacy a “Top Safety Pick Plus” rating, thanks to the car’s “Acceptable” rating in the tough new small overlap frontal impact test.

For 2014, Subaru wisely makes its most advanced safety features optional the mainstream 2.5i Premium model rather than restrict them to the most expensive 2.5i Limited trim level. That’s a good move. Too bad the spiffy new 2.5i Sport can’t yet be optioned with Subaru’s EyeSight system, which includes an adaptive cruise control system, a pre-collision braking system, and a lane departure warning system.