My first time was in 1996, in a Subaru Impreza 2.5RS Coupe, the one with the basket-handle spoiler and the hood scoop and the oversize fog lights. It was a stick, it was wintertime in Denver, Colorado, and I had a great time.

C’mon, that’s not what I’m referencing here. I’m talking about my first time driving a Subaru Impreza, a viscerally sophisticated little compact car that has, traditionally, easily been forgiven its homely styling and premium price tag for its standard all-wheel drive and entertaining driving experience. The non-WRX versions of the Impreza have never been fast, but they’ve always been fun. Especially when the weather is awful.

Fast-forward 17 years, and now I’m a family man living in the suburbs of Los Angeles. I took this 2013 Subaru Impreza 2.0i Sport Premium out for a drive on my usual test loop across the Santa Monica Mountains and up the coastline, where I happened upon Chevrolet filming its redesigned 2014 Impala at Point Mugu, which is seemingly where every car company films its commercials.

Anyway, when I returned home, my wife asked: “So, how was the Impreza?” I had trouble remembering, because the Impreza has evidently sacrificed its soul at the altar of fuel economy.

My test car was the 2.0i Sport Limited, painted Dark Gray Metallic with matching wheels, and equipped with black leather and an option package containing a power sunroof and a touchscreen navigation system. The total sticker price was $25,965. Subaru offers 61 different accessories for this car its dealers, but this test sample had none.

One might logically assume that the Impreza 2.0i Sport models add hardware designed to make the car more fun to drive. However, as my stepfather might have said during my formative years, doing so would make an “ass” out of “u” and “me.” All the Sport designation does is add the gray-painted aluminum wheels, roof rails, and fog lights.

Subaru, you’re such a tease.

Subaru redesigned the Impreza for the 2012 model year, and with this latest iteration, it is much harder to forgive the homely styling. But we’ll get to those details in a bit.

The best looking Impreza, in my opinion, is the 2.0i Limited sedan, thanks to its chrome trim, silver-painted 17-inch aluminum wheels, fog lights, and extra bodywork aft of the rear wheels, which helps balance out a chin that rivals Jay Leno’s. In contrast to the 2.0i Limited Sedan, my 2.0i Sport Limited 5-door hatchback looked out of proportion, angry, chunky, and stubby. The dark gray wheels tucked under dark gray paint reminded me of how Detroit looked for six full months out of every year I spent growing up there – dirty, grimy, cold, and industrial.

The Impreza’s interior is better executed, its materials and patterns betrayed only by a cheap, fuzzy headliner entirely out of character with the rest of the cabin. The textures and appearance of the soft-touch dashboard, the soft-touch upper door panels, the soft-touch armrests, and the leather are downright Germanic, and the steering wheel is both great looking and great to hold. There is a sense of quality to this cabin, which makes a loaded Impreza’s price tag easier to justify.

There’s plenty of room for four sizable adults aboard a Subaru Impreza, but whether they’re comfortable or not is dependent upon which chair they’re assigned. I’m six feet tall and wear pants with a 33-inch inseam, and found that the driver’s seat did not move far enough back in its track to eliminate a splay-legged driving position.

The seat itself is fine, and is clearly designed for people who have no intentions of exploring the Impreza’s cornering capabilities. The center console armrest slides forward for additional comfort, the driver grips a thick-rimmed tilt-and-telescopic steering wheel, and outward visibility is exceptional thanks to small front quarter windows, slim windshield pillars, and enormous side mirrors.

In back, the Impreza supplies decent legroom and foot space, and rear seat occupants sit tall off of the floor. However, the bottom cushion is too flat to provide thigh support and the backrest dials in too much recline. This is why, if you’re ever invited to ride in a 2013 Subaru Impreza, you must call “Shotgun!” immediately.

Pop the Impreza’s hatchback, and you’ll find a claimed 22.5 cu.-ft. of cargo space behind the rear seat. It sure doesn’t look that big, even if you remove the cargo cover and stack items to the ceiling. Fold the rear seats down, and Subaru says the Impreza 5-door hauls 52.4 cu.-ft. of your stuff.

By the way, the rear cargo cover installed in my test car exhibited a surprising level of quality in terms of construction and materials. I’d gladly swap it out for a better headliner material.

There are three things wrong with my Subaru Impreza 2.0i Sport Limited’s interior, aside from the cheesy headliner.

First, the seat heater controls are located so far back on the center console that I discovered them by accident.

Second, the white-faced gauges with orange nighttime illumination offer very poor contrast at sunrise and sunset, and even after full dark descended I couldn’t get them as bright as I would prefer.

Third, and this really is the only one that needs correction, the optional touchscreen navigation system is awful. Equipped with on-screen buttons seemingly designed for people with tiny fingers, the display is angled to reflect as much natural light as possible, thereby rendering information shown upon it nearly illegible. My strong recommendation is to skip this amateur-hour interface and stick with the conventional knobs and buttons that are included with the Impreza’s standard sound systems.

Aside from these complaints, the Impreza’s cabin is a model of simplicity, with intuitive controls located in logical places.

In touting its products, Subaru often talks about the benefits of its Ring-shaped Frame Reinforcement design, a structural element that “direct impact energy around the passenger compartment, rather than through it.” The Impreza is equipped with this type of structural design, along with a brake override system that makes it impossible for the car to accelerate if the brake pedal is pressed. Seven airbags are standard, including a knee airbag for the driver, and every Impreza includes stability control and 4-wheel-disc antilock brakes with brake assist.

Though the Impreza was redesigned for 2012, in NHTSA crash tests the car received unimpressive 3-star ratings for its ability to protect the front seat passenger in a frontal-impact collision and the rear seat passenger in a side-impact collision. The NHTSA has not carried these ratings forward for the 2013 Impreza, which indicates new testing will be conducted on the 2013 model.

The Insurance Institute for Highway Safety (IIHS) has also performed crash tests for this model, and according to the IIHS, the Impreza receives a “Top Safety Pick” rating.

A long-standing Subaru characteristic is a 4-cylinder or 6-cylinder “boxer” engine, so named for its horizontally opposed cylinder structure in which the pistons jab outward from the crankshaft like the fists of a prizefighter. Boxer engines are also called “flat-fours” and “flat-sixes” because, unlike an inline- or V-type engine, they lay flatter within the engine bay. A byproduct of such design is a lower center of gravity, which contributes to greater stability and improved handling.

The boxer engine in the 2013 Impreza is a 2.0-liter 4-cylinder developing 148 horsepower and 145 lb.-ft. of torque, paired with a 5-speed manual gearbox or a Lineartronic continuously variable transmission (CVT). This engine makes the Impreza a Partial Zero Emission Vehicle (PZEV), and is rated by the EPA to get 28 mpg in combined driving with the manual transmission and 30 mpg with the CVT. I averaged 26.4 mpg and spent most of my time driving on the highway. That’s not in the same neighborhood as 30 mpg, but is still pretty good for what Subaru calls “the most fuel-efficient all-wheel-drive car in America.”

All-wheel drive, a rarity in small cars, is standard equipment. Imprezas equipped with a manual transmission have a continuous AWD system that splits engine power 50:50 between the front and rear wheels via a viscous-coupling locking center differential. If the front or rear wheels slip, the system automatically routes more power to ones with grip. Versions with a CVT, like my test car, have an Active Torque Split AWD system that delivers power to the Impreza’s front wheels until they slip, at which point the system automatically distributes power to the rear wheels.

Subie fans know what I’m talking about when I say that the Impreza’s CVT and electric steering conspire to suck all the character out of the car. Boxer engines emit a characteristic grumble and a vibration that endear the cars to their owners. The Impreza’s 2.0-liter might be grumbling and vibrating, but you can’t hear or feel it thanks to the CVT’s whine and the numb steering. So instead of feeling or sounding like a Subaru when accelerating, the Impreza feels and sounds like any other small car.

Unlike many other small cars, however, the Impreza rarely feels underpowered, an unexpected observation considering that it relies upon 148 meager horsepower to motivate a minimum of 2,911 pounds. The CVT is geared to deliver lively throttle response, and this powertrain has no trouble hurling the Impreza down a freeway at velocities that would definitely incur a traffic ticket. The paddle shifters that help make the CVT more palatable react instantly, but the resulting “shifts” are unsatisfying.

On a favorite back road, the Impreza offers hints of traditional Subaru athleticism in its handling, and the brakes work beautifully. Still, the Impreza’s dynamic tuning rendered the car more work than pleasure to drive energetically, in large part due to its rather slow and feel-free steering combined with a suspension that produced far more wallow and roll than is acceptable for the “Sport” version of any car. Even my wife, a car reviewer and automotive copywriter intimately familiar with the Subaru brand, called this car “functional.” Usually, she refers to Subarus as “fun.”

But then, most small cars are functional rather than fun, so don’t let my lament over the current Impreza’s apparent personality disorder concern you much. When driven on commutes to the office, for running errands, and on longer highway trips, the Impreza’s driving dynamics are exactly what most people want most of the time.

As noted above, the Impreza feels quicker than expected unless you’re punching the accelerator to pass while already traveling more than 50 mph. Around town, the electric steering doesn’t feel light or loose, providing decent on-center heft if not clear communication. The suspension delivers a good blend of ride comfort and road feel, and the brakes are responsive and easy to modulate. This is an easy, if forgettable, car to drive when you’re not placing heavy demands on it.

Furthermore, though I reviewed this particular Impreza in California, I’ve got experience driving the 2012 model through several inches of slushy snow on its standard tires, and the car was virtually unstoppable. The Impreza’s standard AWD is, for many people, reason enough for the Subaru to vault to the top of the shopping list – especially in regions that see significant snowfall.

With the exceptions of its styling and underlying components, the Subaru Impreza has gone mainstream to meet new fuel economy demands and to draw new buyers to Subaru. Given its standard AWD, roomy interior, impressive cargo space, and affordable price tag, the Impreza is impressive enough to potentially develop a whole new fan base. Faithful Subaru fans, however, are likely to miss certain quirks of character. Count me among them.

Subaru supplied the vehicle for this review 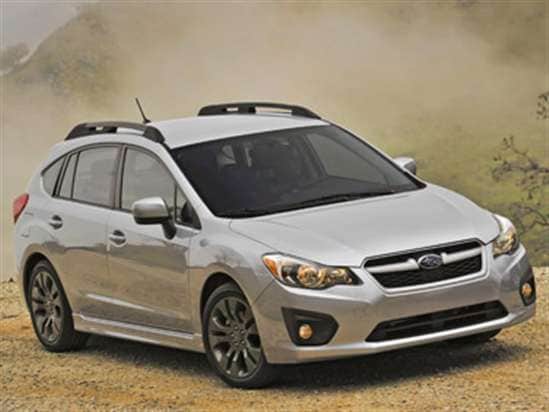