As the sun begins to set on the current generation Subaru WRX and WRX STI, Subaru has announced the pricing for the 2014 models. A 2014 WRX sedan or five-door hatch will set you back $25,995 (not including a $795 destination charge). That nets you a 2.5L turbocharged and intercooled Boxer four-cylinder with 265 horsepower and 244 pound-feet of torque. All of that's paired with a five-speed manual and Subaru's Symmetrical All-Wheel Drive system. Standard equipment includes sport-tuned suspension, seventeen-inch alloy wheels, an AM/FM/CD stereo with six speakers, and Bluetooth.

Those looking for more features should look at the WRX Premium which starts at $28,495 and adds fog lights, a power moonroof, and a body-color trunk spoiler for the sedan. Also standard is the all-weather package that includes heated seats, heated exterior mirrors, and a windshield wiper de-icer.

Want some luxuries with your WRX? Then you want the WRX Limited which starts at $29,495 and comes with leather seats and HID headlights. You can order navigation on the WRX Limited for $1,100.

Over at the WRX STI camp, the 2014 model starts at $34,495 for the WRX STI sedan and packs a 305 horsepower turbocharged and intercooled Boxer four-cylinder, six-speed manual, performance suspension, Multi-Mode Driver Controlled Center Differential, and a load of other goodies. $36,495 nets you a WRX STI hatchback that includes BBS wheels, fog lights, and a rear window wiper/washer. For $37,845, the WRX STI Limited Sedan packs a power moonroof, fog lights, leather upholstery, and BBS wheels. 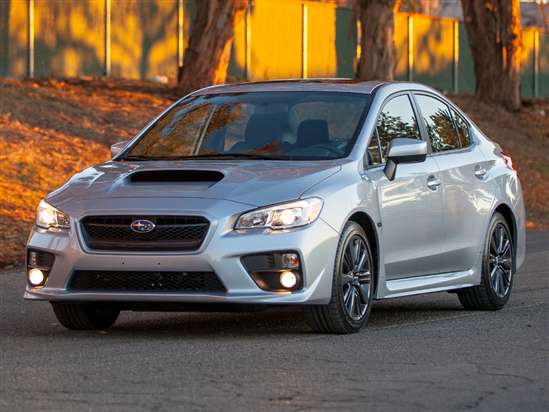