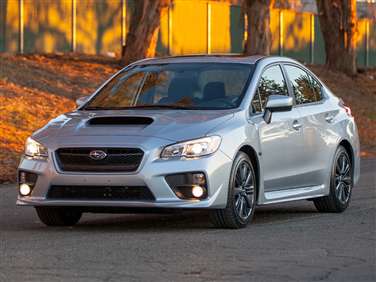 All About Subaru Impreza WRX

The Subaru Impreza WRX is a high-performance version of the Subaru Impreza. The WRX originally debuted in Japan in 1992. An American version of the vehicle was not made available until the 2002 model year. The current 2nd-generation of the performance-oriented compact was introduced to the U.S. for the 2008 model year. The vehicle competes directly with other sporty compacts, including the Honda Civic Si and Mitsubishi Lancer Evolution.

Inside and out, the Subaru Impreza WRX is designed for maximum performance and handling. The vehicle's facelift in 2008 toned down some of the European-inspired rally features found on the original design. This was done by Subaru in an effort to appeal to a wider audience. The Impreza WRX is available as either a 4-door sedan or hatchback. Dimensions for the vehicle include a length of 180.3 inches (173.8 inches for the hatchback model), width of 68.5 inches and height of 58.1 inches.

The interior of the latest incarnation of the WRX incorporates a roomier feel and more luxurious components. Seats have been modified to provide more back support. Storage capacity in the sedan model is 11.3 cubic feet. The hatchback provides a considerable upgrade in storage, with a total of 44.4 cubic feet available.

The Subaru Impreza WRX comes standard with an EJ25 2.5-liter turbocharged 4-cylinder engine that boasts 224 horsepower and 226 lb-ft. of torque. A 5-speed manual transmission is standard and features a drive ratio of 3.9. A 4-speed automatic with manual shift capability is available as an optional upgrade. The vehicle features superior handling thanks in part to the all-wheel drive system. Other notable performance features include sport-tuned MacPherson front struts, double wishbone rear suspension, Vehicle Dynamics Control and lightweight construction. The estimated 0-to-60 mph acceleration time for the Impreza WRX is approximately 5.6 seconds.

An upgraded trim level of the WRX is known as the Subaru Impreza WRX STI. The STI incorporates further performance upgrades, as well as additional comfort and convenience equipment. The vehicle was first made available to the United States for the 2004 model year. The latest version of the vehicle features a 6-speed manual transmission mated to a 2.5-liter turbocharged 4-cylinder engine. The STI musters a pulse-pumping 305 horsepower at 6,000 rpm and 290 lb-ft. of torque at 4,000 rpm. A high-performance suspension, larger brakes and front/rear limited-slip differentials are also unique upgrades to the WRX STI. Comfort and convenience upgrades include leather/Alcantara seats, 6-disc CD changer, radio controls on the steering wheel, Xenon headlights and 18-inch alloy wheels.

The Subaru Impreza WRX comes standard with antilock 4-wheel disc brakes, brake assist, an antiskid system, daytime running lights, dual front airbags, front side airbags and side curtain airbags. The NHTSA awarded the Subaru Impreza with a perfect five stars in the categories of driver front impact, passenger front impact and driver side impact. A 4-star rating was awarded in the categories of 4WD rollover and rear passenger side impact.

The 2009 Subaru Impreza WRX is a carryover from 2008. The 2009 Impreza can be purchased in either hatchback or sedan form, and it comes in base, Premium and STI trims. The standard 2009 WRX and WRX Premium are outfitted with a 2.5 liter, 4-cylinder motor that produces 265 horsepower and 244 lb-ft of torque. A 5-speed manual transmission is the exclusive gearbox option, and fuel economy numbers come in at 18 miles per gallon in city driving and 25 miles per gallon on the highway. The WRX STI drops the sedan platform and substitutes a 305 horsepower edition of the 2.5 liter motor that also provides a ground-pounding 290 lb-ft of torque. A 6-speed manual transmission routes power to all four wheels – all-wheel drive is standard across all editions of the Impreza WRX. Fuel economy is reduced to 17 miles per gallon around town and 23 miles per gallon on the highway