The Subaru WRX is a four door five passenger all wheel drive turbocharged sports car that is available in sedan and hatchback configurations as well as a high performance STI version.  The WRX is sold in base, Premium and Limited trim levels, while the STI is available as a standard model or the top of the line STI Limited.  All WRXs come with symmetrical all wheel drive, sport tuned suspension, 17 inch wheels wrapped in performance rubber housed in a wide body design; while on the inside every WRX comes standard with a six speaker stereo complete with USB and auxiliary input jacks as well as six standard airbags, Bluetooth hands free connectivity and a pair of sport buckets up front.

The entry level Subaru WRX is available as a four or five door and is powered by a 2.5 Liter turbocharged boxer engine that pumps out a total of 265 HP and returns an estimated 19 MPG in the city and as much as 25 MPG on the highway starting at $25,595.  The WRX Premium starts at $28,095 and comes with a power tilt/slide moon roof, heated front seats, fog lamps and an available touch screen GPS navigation system.  The $29,095 WRX Limited gets upgraded with leather upholstery and HID headlamps, making the rally bred rocket a bit more luxurious.

The WRX STI starts out at $34,095 for the four door and $36,095 for the hatchback, while under the hood Subaru has upgraded the 2.5 Liter flat four with a few go fast goodies making 305 HP being channeled through a close ratio six speed manual to the tune of 17 MPG around town and up to 23 MPG at speed.  Other upgrades to the STI include a driver controlled center differential that allows operators to send a bit more grunt to the rear wheels at will as well as Brembo clampers at all four corners to bring things to a halt, quickly.  Meanwhile the $37,445 Subaru WRX STI Limited, which is only available in sedan form, gets the luxury treatment with leather seating, powered moon roof and a set of 18 inch BBS aluminum alloy wheels.

A list of cars similar to the WRX STI include the 2012 Mitsubishi Lancer Evolution, 2012 Lexus IS-F and 2012 Volkswagen Golf R.

See more details about the 2012 Subaru WRX STI including 10 things you need to know about rally bred rocket from Japan. 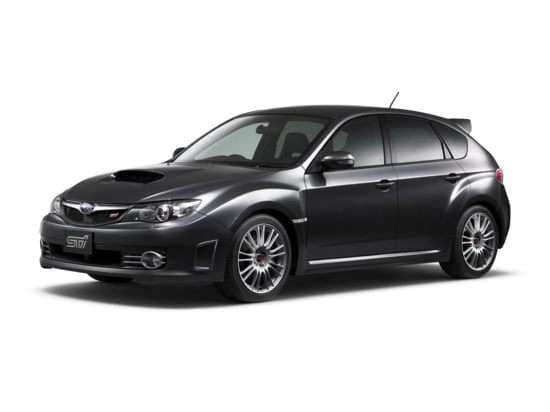