Not so long ago, the Subaru WRX was considered “exotic” here in America. Originally introduced in Japan in 1992, the WRX was not initially offered on this continent. However, as the Subaru’s rep grew when it started winning rallies and appearing in video games, American enthusiasts clamored hungrily for the “unobtainable” WRX.

Even before the development of the WRX however, back in the late 1980s, Subaru created Subaru Tecnica International (STI) to coordinate development for its motorsports activities. STI also created higher-performance street versions of the WRX, which led to the development of the Impreza WRX STi. In 2004, a WRX STi was offered in America for the first time. For 2011, Subaru introduced a version of the car calibrated more specifically for street performance.

With the 2011 model refresh Subaru also reintroduced a four-door sedan in STI trim after running only a five-door hatchback since 2008. To our eye, the STI sedan was always better looking than the five-door and with the new wider track and flared fenders, the STI is starting to look less like a boy racer and more like a machine to be taken seriously.

Even the huge rear wing is starting to "grow" on us. Particularly since it no longer severely obstructs rearward vision the way it did in earlier versions of the car. However, if Subaru were to offer the STI without it, we’d go that route. We like the STI’s more aggressive front styling as well. The Subaru’s blacked out grille and larger air intakes give the STI more of a “get-out-of-my-way” glower.

The interior also got upgrades for 2011. Bluetooth and USB connectivity are highlights of the new audio system. And while these are cutting edge tools, the double-DIN device in which they’re housed looks more like a refugee from a J.C. Whitney catalog — circa 1980. A Limited version of the sedan is offered with leather seats, a sunroof, foglights, and BBS wheels. The only other thing you can add to your STi is a navigation system.

However, if you're getting into a Subaru STi looking for an abundance of creature comforts, you might do better to hop out and march yourself across the showroom to the Legacy GT (similar performance, more luxury features). The STi is all about going, with not a lot of attention paid to being. It’s a stripped down racer for the street and makes no apologies whatsoever for that fact. If you don’t sit on it, or grasp it to control the vehicle, you’ll find it finished in hard plastic — even if you order the leather option.

Based as they were on rally cars, the first STI models shipped here came up somewhat lacking when asked to perform vigorously on the street. Yeah, they were fast and yeah, they handled better than the average car, but the compliance built into their suspensions to deal with the vagaries of rallying left those STI models less than razor sharp on pavement.

Drive a 2010 STI and a 2011 STI back-to-back and the difference in handling is readily discernable. The 2011 turns in more sharply, corners more flatly and just generally feels more capable on the track. The car impressed us with its heightened response to steering inputs and its willingness to dive deeply into corners at great speed. Without question, the 2011 STI is definitely improved over the 2010 in the handling department.

The powertrain is unchanged however; the STI engine is still the now-familiar 305-horsepower 2.5-liter turbocharged flat four. Power is transmitted to all four wheels via a six-speed manual transmission and a driver controlled center differential (called DCCD) enabling you to manually bias torque between the front and rear wheels based on the driving situation. Subaru, for now, is resisting the direct shift gearbox trend in cars of this nature.

The STI is capable of acceleration from zero to 60 miles per hour in 4.7-second and can run the quarter mile in 13.7 second.

By all measures, the 2011 Subaru Impreza WRX STi is an improvement over the 2010. It’s more handsome, handles better and offers more comfort and convenience. Pricing starts at $34,720 for the sedan and given the enjoyment we derived from the car, if there were no other considerations, we’d endorse the STi heartily.

Thing is, there’s another consideration.

For the way most people drive, the standard WRX is more than sufficient. At approximately $8500 less, we’re struggling to justify the STi, particularly since there is no real difference in the look of the two cars. For 2011, the wide-bodied look for both STi sedan and five-door also grace the standard WRX.

Plus, it comes with a more reasonable-looking rear spoiler. Yes, you'll give up 40 horsepower and 46 ft-lbs of torqueto the STi, but remarkably, the WRX has consistently tested quicker to 60 than the STi. The gear that truly makes the STi really only comes into play in competition situations, urban drivers looking for the smart move should get a WRX instead. 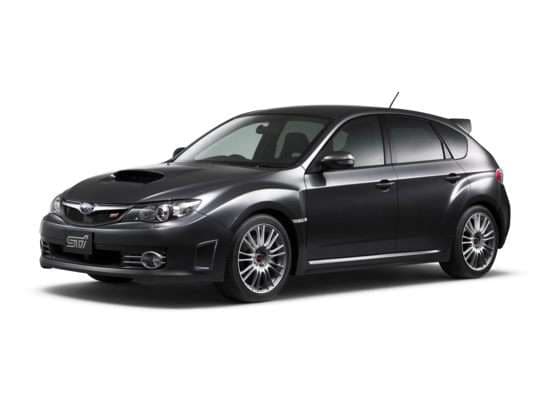