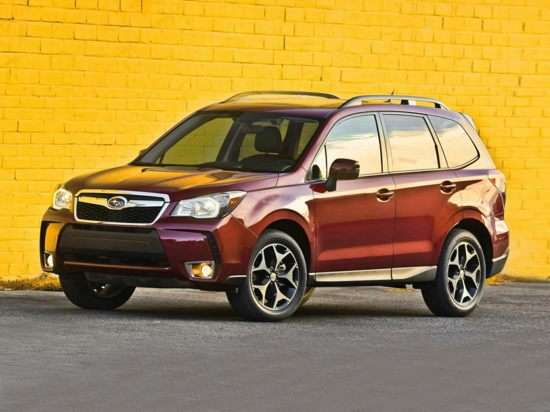 Changes for the 2015 Subaru Forester:

Entering its second year following a complete redesign, the 2015 Forester gains a standard reversing camera. The Forester 2.5i Premium now includes a power panoramic sunroof, the 2.5i Touring has new aluminum wheels, and the 2.0XT Premium features a standard All-Weather Package. Any 2015 Subaru Forester equipped with Touring trim has keyless passive entry with push-button starting and a set of HID headlights as standard equipment. Subaru also drops the price of its optional EyeSight technology this year.

Subaru sells the 2015 Forester in 2.5i and 2.0XT model series, the latter equipped with a turbocharged engine. Base, Premium, Limited, and Touring trim levels are offered for the Forester 2.5i, while the Forester 2.0XT is available in Premium or Touring trim.

The Forester 2.0XT is equipped with a turbocharged, 2.0-liter, horizontally opposed 4-cylinder engine. It makes 250 horsepower, and is paired with a uniquely calibrated version of the CVT that also features paddle shifters for manual control over gear changes.

All 2015 Subaru Forester models have a standard all-wheel-drive system.

According to the EPA, the Forester 2.5i with the manual transmission is rated to get 25 mpg in combined driving. Get the CVT, and this number jumps to 27 mpg. The more powerful turbocharged engine in the 2.0XT returns 25 mpg.

The 2015 Forester earns a 5-star overall crash-test rating from the NHTSA. As this summary is written, however, the Insurance Institute for Highway Safety (IIHS) has not provided an official rating for the 2015 version of this Subaru. Last year, the structurally identical model was named a “Top Safety Pick” and, when equipped with the optional EyeSight system, received a “Superior” rating for its front crash prevention capability.

What is EyeSight? Glad you asked. This is Subaru’s camera-based driver assistance technology, and it includes adaptive cruise control, forward collision warning, pre-collision braking, and lane departure warning systems. During the course of the model year, Subaru will be adding new features to EyeSight including a lane change assist system, a blind spot monitoring system, and a rear cross-traffic alert system.

A reversing camera is standard for all Forester models this year. Additionally, and depending on trim level, this crossover SUV can be equipped with keyless passive entry with push-button starting, a premium sound system, a navigation system, and more.