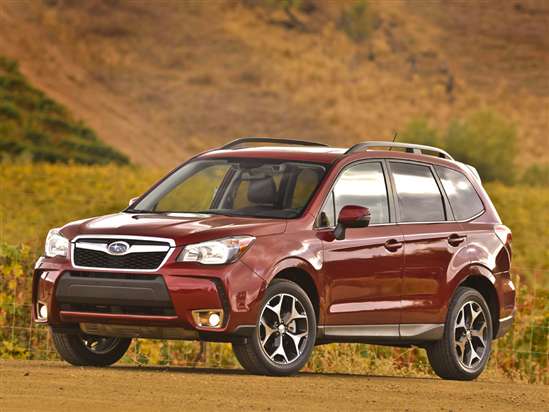 Changes for the 2014 Subaru Forester:

Two versions of the new Forester are on sale: the Forester 2.5i and the turbocharged Forester 2.0XT. The 2.5i can be equipped with base, Premium, Limited, and Touring trim, while the 2.0XT is offered only with Premium or Touring trim.

The Forester 2.5i Limited adds leather seats and trim, automatic climate control, a power liftgate, and a cargo tray. This version of the Forester also has fog lights, automatic headlights, and hill descent control.

Choose the 2.5i Touring or the 2.0XT Touring, and the Forester gets a touchscreen infotainment system with navigation, voice recognition technology, SMS text messaging capability, Bluetooth audio streaming, HD Radio, and more. The Touring is also equipped with dual-zone automatic climate control, a better sound system, and nicer interior trim.

A 170-horsepower, 2.5-liter 4-cylinder engine is standard for the Forester 2.5i, delivering power to all four wheels through a 6-speed manual gearbox or a CVT.

The Forester 2.0XT has a turbocharged 2.0-liter 4-cylinder engine rated to produce 250 horsepower at 5,600 rpm and 258 lb.-ft. of torque between 2,000 rpm and 4,800 rpm. A CVT is standard, equipped with paddle shifters, and SI-Drive technology provides a choice between Intelligent, Sport, and Sport Sharp powertrain modes. This version of the Forester also gets a sport suspension and bigger brakes.

Every 2014 Forester is equipped with all-wheel drive. With a manual transmission, the power is continuously and evenly split between the front and rear wheels. With a CVT, power flows to the front wheels until wheel slip dictates transfer to the rear wheels. These versions of the Forester may include an X-Mode setting that locks the power split for improved traction.

Forester fuel economy ratings range between 22 mpg in the city for the Forester 2.5i with the standard manual transmission to 32 mpg on the highway for the same model equipped with a CVT.