If you’re reading this review, there’s a good chance that you already know the how and the why behind the existence of the 2014 Subaru BRZ, a rear-wheel-drive sports coupe utterly antithetical to the rest of the automaker’s lineup. If you don’t, here’s the short version of the story:

Toyota bought a big chunk of Fuji Heavy Industries (FHI), and then approached FHI’s Subaru about helping out with the engineering of a rear-drive sports coupe. After a period of time during which Toyota attempted to convince its unlikely partner that the resulting performance car would add to rather than detract from the DNA of what makes a Subaru a Subaru, Subaru relented and the Toyota FT-86, Scion FR-S, and Subaru BRZ were born.

Predictably, young enthusiast buyers went wild for an affordable, rear-drive, and likely bulletproof car that could be easily customized. Sales were robust at first, especially in warmer climates. Since then, though, the people who really wanted one have already got one, while everyone else evidently requires something with a real back seat and a bigger trunk.

After driving the Scion FR-S last year, and coming away from the experience thinking the car was impressive but ultimately disappointing, I wanted to revisit this 2+2 duo to make sure I wasn’t missing something the first time around. When every automotive publication on the planet glows with praise for a vehicle that I respond to with a definitive “Meh,” I get worried about my ability to make a legitimate living.

This time around, I grabbed the key to a 2014 Subaru BRZ. I’m still impressed by this car at the same time that I’m puzzled, glad it exists but thinking it could have been better, even at what is an affordable price.

2014 Subaru BRZ Review and Quick Spin: About Our Test Car

2014 Subaru BRZ Review and Quick Spin: About Our Test Car

Perhaps passions have cooled because Subaru jacked the price up by $1,100 over last year, to $26,390 for the BRZ Premium model, including a destination charge of $795. Given that the only change to equipment levels is the addition of Aha smartphone connectivity and integration, this jump in price certainly appears to be opportunistic more than anything.

If you can’t row your own gears and require an automatic transmission, that’s gonna cost you. Why? An automatic is offered only for the more expensive BRZ Limited, and it adds $1,100 to the starting price for that model. In addition to leather seats with Alcantara suede inserts, the BRZ Limited is equipped with dual-zone automatic climate control, heated front seats, heated side mirrors, and a keyless entry system with push-button starting.

My BRZ Limited test car has the standard manual gearbox and WR Blue Pearl paint, for a total of $28,390.

I realize that the Scion FR-S and the Subaru BRZ are nearly identical in terms of design, but I like the Subaru better. For some reason, it looks cleaner to me, more refined somehow, and I think a big part of my reason for saying this has to do with its simpler side scuttle styling. I am not, however, a fan of the BRZ’s 17-inch aluminum wheels. This car could use more rubber, and a less delicate wheel design.

Inside, the BRZ looks just like a Toyota but smells like a Subie. Purposeful details like the tautly wrapped mesh over the upper dash speakers and the properly-sized and perfectly-positioned grab handles on the door panels lend the car a purposeful air, but cost-cutting is evident in the hard plastic surfaces and silver plastic dashboard trim that looks just like silver plastic.

Perhaps as a nod to its technology-addled, energy drinking target buyer, the Subaru BRZ offers little in the way of storage aside from bottle holders in the door panels and a rubber-lined smartphone tray in the dashboard, one flanked by a USB port and an auxiliary audio input jack. The center console serves as a tray with adjustable cupholders, but it is uncovered, shallow, and placed too far back in the car for easy access.

One of my favorite things about the Subaru BRZ is the driver’s seat. Comfort and support are outstanding, and while the leather feels a little stiff and dry the Alcantara inserts are helpful for holding the pilot in place while exploring cornering capability. Of course, aggressive bolstering helps, too, all the more welcome because they’re not at all constricting.

The driving position is perfection, the tilt/telescopic leather-wrapped steering wheel thick in all the right places. There’s no center console armrest, but if you buy a BRZ outfitted the way the automotive gods intended, your right arm ought to be busy rowing gears on a regular basis, so you shouldn’t miss it. The BRZ’s upper door panel material is softly padded, as are the armrests, and the “Oh S%#t!” handles are easy and comfortable to grab.

As terrific as the front seats are, the BRZ’s rear seat is effectively useless, especially if tall people are driving or riding shotgun. I actually did fit back there, with my head smashed against the rear glass, and the seat itself is actually comfortable. But there’s no way somebody could have ridden in the front passenger’s seat, let alone drive if I’d wedged myself into the left rear seat. Think of this Subaru strictly as a 2-seat sports car.

Though the BRZ looks like it might be a hatchback with good cargo space, it isn’t, and the trunk holds just 6.9 cu.-ft. of stuff, a couple of gallons of milk more than a Miata. The rear seatback folds as a single piece, though, expanding cargo capacity but reducing the ability to conceal contents.

Aside from the car’s inherent impracticality, the Subaru BRZ’s touchscreen infotainment system is awful in terms of layout, glare, intuitiveness, response, and distraction level. Give me buttons and knobs, please. That said, it is reasonably easy to pair an iPhone and to stream music, and it does provide hands-free text messaging capability.

Otherwise, this Subaru is simplistic and ergonomically sound, lacking only soft padding on the hard plastic center console where legs are likely to brace for hard and fast cornering. Simplicity rules in this cabin, which features clear and legible display markings, and large buttons and knobs for most controls.

Subaru could install better speakers, though. Perhaps the company expects owners to rip out the OEM sound system and replace it with something more robust. In any case, The White Stripes challenged my BRZ’s audio components, Jack and Meg sounding tinny and distorted no matter how I calibrated the system.

Equipped with every safety feature the federal government requires, and with almost nothing it doesn’t, the BRZ is about as basic as it gets when it comes to safety equipment. That doesn’t prevent the car from earning a 5-star overall crash-test rating from the National Highway Traffic Safety Administration (NHTSA), though.

In tests performed by the Insurance Institute for Highway Safety (IIHS), the BRZ gets the top rating of “Good” in all assessments, but note that the car hasn’t been subjected to the new small overlap frontal-impact test yet. Also, keep in mind that some of the car’s favorable ratings are comparable only against vehicles of similar weight to the 2,764-pound BRZ.

As might be expected, the Subaru BRZ delivers a raw, visceral driving experience. It is always loud inside of this car, and the driver feels every single crack, bump, and hole in the pavement. If this doesn’t sound like a good time, you’re not going to enjoy this car.

Much of the racket comes from the 2.0-liter 4-cylinder engine tucked fairly far back in the BRZ’s chassis for improved weight distribution. It features horizontally opposed cylinder design, also known as a boxer-type engine because the pistons jab out toward the sides rather than up and down or in a V-shaped pattern.

As is characteristic of Subaru boxer engines, this one grumbles and vibrates, something I happen to think lends the car even more character. Yet, on the freeway doing 80 mph, the tachometer indicated 3,400 rpm in sixth gear. That’s noisy, and its one reason the BRZ always feels like it is going faster than it really is.

The engine’s power isn’t particularly accessible, either, with 200 horsepower available at 7,000 rpm and just 151 lb.-ft. of torque peaking at 6,400 rpm. As a result, you’ve gotta abuse this engine to make the BRZ feel quick, let alone fast. The engine certainly is willing to rev, but it generates more noise than corresponding velocity.

It’s a good thing, then, that the BRZ is fun to shift, because you’ll be doing much of that. This car’s got a terrific gearbox once you get acclimated to the fairly heavy clutch. Also, despite my spending lots of time in the upper reaches of the rev range, the BRZ returned 25.9 mpg during testing, better than the EPA’s official estimate in combined driving.

Maybe that fuel economy result reflects too much time traveling California’s smooth freeways and wrinkle-free coastal highways, where the BRZ’s stiff suspension seems happiest but the responsive right-now steering proves too sensitive. Encounter imperfect pavement, and this Subaru suffers a busy ride and darty handling, and the traction and stability control system is a little too eager to engage. If you find that bothersome, switch to VSC Sport mode in order to reduce unwanted intervention.

Sensitivity wasn’t an issue with my BRZ’s brake pedal right at the top of travel, where you want reassurance that they’re working properly as you slam the car down a twisty two-lane road. The BRZ also feels like it needs more stick than the standard 17-inch rubber provides. I found the nose pushing more than expected in decreasing radius curves, combined with an inside rear wheel attempting to spin early while exiting tight corners. As a result, this Subaru is very much a slow-in, fast-out kind of car.

Every time I got behind the BRZ’s wheel and got the car moving, I felt like I was driving a big, enclosed go-kart, and not one of the electric ones used for indoor racing. Instead, the BRZ reminded me of the karts at outdoor fun parks, equipped with lawn mower engines and “raced” around choppy tracks located next to mini-golf courses. Stiff, loud, not particularly fast.

What the Subaru BRZ needs is a turbocharged engine with more accessible torque, a set of 18-inch wheels and performance tires, better calibrated brakes with beefier discs, and speed variable steering that doesn’t respond instantaneously when you’re just motoring down the freeway. That, and a big dose of real-world refinement, and this could be an undeniably compelling sports coupe.

Either that, or I’m just getting old.

The Subaru BRZ should be a dream come true for a guy like me, a balding Mazdaspeed Miata owner with a couple of little kids, a dude who really ought to spend less time in the sun. It represents an impressive performance value and possesses a respectable pedigree, but I get the sense that the BRZ was developed on racetracks rather than in the real world, that it is dynamically optimized for lap times rather than commute times.

That’s fine, but I don’t drive on racetracks, not even on the weekends. This latest experience in the Toyobaru confirms for me that I should just get another Mazda Miata, this time with a power retractable hardtop, or a new Volkswagen GTI with space for child safety seats and room for deals discovered at the local big-box retailer.

Positioned somewhere in between the Miata and GTI, the Subaru BRZ simply doesn’t spark enough passion or provide enough practicality to inspire any desire. Your results, however, may vary.

Subaru provided the 2014 BRZ for this review 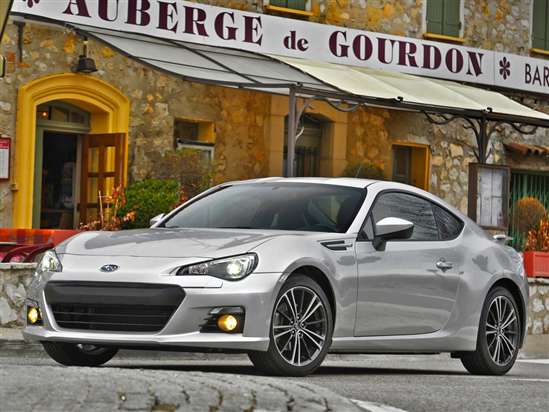