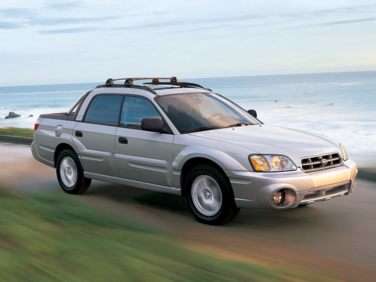 All About Subaru Baja

Subaru has a knack for making its cars do more than expected.

Take the original Subaru Outback for example. When Subaru’s product team realized it was in the midst of an SUV boom—with no SUV product they could offer—they turned the Legacy station wagon into a pseudo SUV.

Of course, having a doctrine of employing all-wheel drive for every product (save its BRZ sports car) makes this an easy route for Subaru to take.

This brings us to the Subaru Baja.

Perhaps best thought of as a Legacy Outback pickup—along the line of the venerable Chevrolet El Camino, the Subaru Baja was a model the company produced between for four years, between 2003 and 2006 to compensate for the lack of a light truck in its lineup.  As you can see form the accompanying photographs, both the styling and the concept of the Subaru Baja were exceptionally polarizing.

It was one of those things; either you liked it, or you didn’t.

There was no indifference of opinion where the Subaru Baja was concerned.

Given you probably landed here as a result of a specific search, we’re going to go with the assumption you’re one of the people who find the car interesting—for whatever reason.

Like another GM product, the Chevrolet Avalanche sport utility truck, the Subaru Baja featured a removable panel where the cargo bed met the passenger compartment permitting cargo to intrude into the passenger compartment when more space was required. Subaru called this innovation the “Switchback”. When it was employed, bed length increased from 41 inches to 60 inches. And while the dimensions of the pass-through constricted the height of what you were hauling, longer items could be readily accommodated.

Powering the Baja was Subaru’s 2.5-liter horizontally opposed four-cylinder engine, tuned to produce 165 horsepower and 166 ft-lbs of torque. A five-speed manual transmission was standard fare; a four-speed automatic was the optional offering. And, of course, the Baja featured Subaru’s all-wheel drive system. The other engine offering—from model year 2004 and forward—was a turbocharged version of the 2.5-liter four, capable of generating 210 horsepower and 235 ft-lbs of torque. As you might imagine, Subaru’s product team named this version "Baja Turbo".

The standard equipment set was largely the same as specified for the Subaru Legacy of the day. This included air conditioning, full power accessories, leather upholstery, and a sunroof. Options included a bed extender as well as a Baja-specific back rack configured to work with the bed’s cargo management system