Whenever the mainstream automotive media – of which I am definitely a member -  talks about a sports car as raw as the 2015 Alfa Romeo 4C, the word ‘compromise’ is inevitably used in describing what it brings to the table.  It’s important, however, to understand that while compromise is a two-way street, it’s almost never presented as such within the context of these discussions.  A quick survey of the available materials reveals that ‘compromise’ as applied to the Alfa Romeo 4C and its ilk almost exclusively refers to the perceived curtailment of a vehicle’s comfort and/or practicality, with ride quality, features availability, and storage capacity the three most commonly-cited concessions.

But what of the flip side of the automotive compromise blame game?  What if the car in question has been engineered from the viewpoint that stuffing its interior with such niceties as heated seats and a sunroof, or softening its suspension for the daily drive to work are not in fact desirable design elements but rather themselves ‘compromises’ of an unacceptable order that go too far in separating the pilot from the visceral thrill of motoring?

This is the perspective from which the performance-mad designers at Alfa Romeo have assembled the all-new 4C, and it’s from this angle that the tantalizingly-gorgeous coupe must be evaluated.  Roll up your yoga mat and cancel your spin class, because it’s time to chalk up your hands and slap on some sunscreen: the 4C is trading in your safe and predictable daily routine for the automotive equivalent of a 1,000-foot free climb.

One of the first dispensations the 2015 Alfa Romeo 4C makes is the notion that a sports car’s cockpit should be anything more than an efficient holding tank for the meat-machine interface that is required to wake the beast from its parked slumber.  Opening the door of the 4C disturbs the gorgeously sinuous at-rest posture of its muscular composite body panels and reveals a carbon fiber tub that has been laboriously constructed using Formula 1 assembly techniques.  One is required to step, slide, or teleport over the car's wide sill in order to take a driving position in a grippy seat that will slide forwards or backwards but which steadfastly refuses to recline (there’s simply no room inside the cabin).  You’ll notice a similar lack of space for storing anything more than a mobile phone, along with an absence of adornment (or even traditional door handles) throughout the Alfa Romeo’s interior.

What you do get from the 2015 Alfa Romeo 4C’s cabin is a thick, flat-bottom steering wheel, a digital gauge cluster that displays vitals such as temperature, speed, and engine RPM, as well as a basic stereo system that I didn’t even bother to switch on.  In the place of where one might expect to find the coupe’s manual shift lever there is instead a small cluster of buttons labeled D/N/A (controlling Dynamic, Natural, and All Weather drive modes) as well as R, N, and 1.  The latter are linked to the 4C’s dual-clutch automated manual transmission, with further points of gearbox interaction found in the form of paddle shifters mounted to the rear of the car’s tiller.

As one who prefers the engagement offered by a traditional manual transmission, I was at first disappointed to learn that there would be no such offering made in North America with the 2015 Alfa Romeo 4C.  However, after sampling the character of the coupe’s dual-clutch setup, I can safely say that enthusiasts will find it rewarding to work the automated manual to the bone via the finger paddles.

Perceptive readers have already noticed that there doesn’t seem to be a ‘Park’ setting for the Alfa Romeo 4C’s tranny, and this is indeed correct: one simply puts the foot on the brake and pushes the starter to fire up the car’s 1.7-liter, turbocharged four-cylinder engine after making sure that the parking brake is engaged.  Select R for reverse or 1 for ‘drive’ and make sure to pay attention if you’re parked on a slope, as the car will roll forwards or backwards in any transmission setting.

It’s hard not to stay alert, of course, when one considers that the Alfa Romeo 4C’s busy little beehive of an engine is buzzing directly behind your head.  You’ve got two exhaust options with the car – with mufflers or without – and the biggest difference between the two is the decibel level of the four-banger’s high-rpm snarl.  Decide how much you hate your neighbors before making your decision at ordering time.

The rush of internal combustion by-products isn’t the only aspect of the 4C’s aural symphony, as the car’s sonic bouquet is further sweetened by the sound of its turbocharger spooling up with an intensity that makes you question whether your skull isn’t perhaps being used as an amplifier.  It’s a glorious racket, and one that sounds much more sophisticated than what one would expect from such a small-displacement motor.

One With The Road

One With The Road

After you’ve taken in all of the above, it’s time to snap out of the intoxication induced by the Alfa Romeo coupe’s beautiful body work and enthralling soundtrack and actually start driving.  It’s here that another of the 4C’s performance-focused characteristics comes into sharp focus: namely, its unassisted rack-and-pinion steering.

A blessing in a world increasingly beset by feedback-free electrical steering setups, the Alfa Romeo does require quite a bit of elbow grease to maneuver through a parking lot at low speeds.  As soon as you clear the pod-bay doors and head out onto the open road, of course, you’ll immediately forget the shoulder workout you just went through, because the precision with which you can point the Alfa Romeo through the apex of whatever corner you might encounter is astounding.  Coupled with the car’s lightweight chassis (just over 2,400 lbs thanks to a pair of aluminum subframes connected by its carbon fiber tub) and stiff suspension system, the Alfa Romeo 4C presents drivers with the kind of immediacy that has all but disappeared from the modern automotive landscape.

The sensation once underway in the 2015 Alfa Romeo 4C that everything is happening, and it’s happening right now, is further enhanced by the 237 horsepower and 258 lb-ft of torque made possible through the almost 22 lbs of boost pushed out by the car’s turbocharged engine.  By making use of a scavenging system designed to route as much air into the turbo as possible at lower speeds, lag has been minimized from the moment of throttle application (although it’s still discernible off of the line).  60-mph arrives from a standing start in a factory-boasted 4.5 seconds.

That’s an impressive number, but I assure you that straight-line speed is the least interesting of the 4C’s tricks.  Instead, I found myself savoring the way that the car kept me connected to the road beneath its performance rubber (available in sizes up to 19-inches), and the sensation of stability imparted by its mid-engine design and its 41/59 front-rear weight balance.  My one complaint about the Alfa Romeo’s driving dynamics had to do with its brakes, which featured very little pedal travel and consequently not the same level of feedback on offer from the rest of the car’s chassis and drivetrain.

There is no other sports car in the $50k range that can claim the same unfiltered driving experience offered by the 2015 Alfa Romeo 4C.  There are models that are faster (Chevrolet Corvette Stingray) and others that are more refined (Porsche Cayman), but the uniqueness of the 4C rests with its willingness not to compromise in the direction of domesticity.  This is not a car for everyone.  Indeed, this isn’t even a car that would appeal to most, which is why corporate parent Fiat plans to import no more than 1,200 examples per year.  But if you care more about driving than you do about leather headliners and how many bags of golf clubs you can schlep in the trunk, then the Alfa Romeo 4C could very well be the car for you. 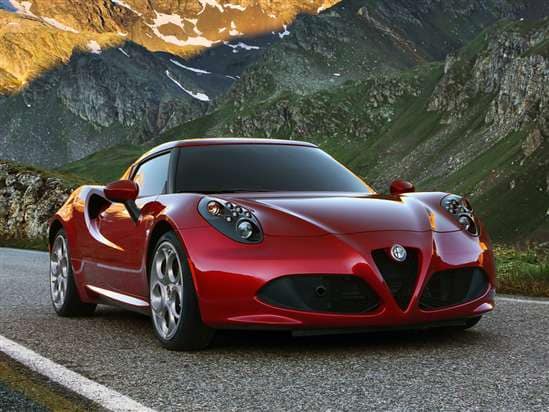