10 Things You Should Know About the Volkswagen Atlas

VW recently gathered the press at the Santa Monica Pier in Southern California to reveal the 2018 Volkswagen Atlas, an all-new 7-passenger crossover suv that will go on sale in the spring of 2017. The assembled members of the media were invited to photograph and crawl around the new suv, and to watch brief marketing and technical presentations about the vehicle. The event even merited an appearance by Hinrich J. Woebcken, CEO of the North America Region, Volkswagen and President and CEO of Volkswagen Group of America, Inc.

It will be a while before we get a chance to drive and review the Atlas, but enough information has trickled out so far for us to compile 10 Things to Know About the 2018 Volkswagen Atlas.

Volkswagen’s current lineup includes the Tiguan compact crossover vehicle, Touareg midsize 2-row crossover vehicle and Golf SportWagen. For 2017, VW has a new entry, the Golf Alltrack, an all-wheel drive variant of the SportWagen that adds off-road styling to the wagon. A subcompact crossover vehicle concept debuted at the Geneva Auto Show this year, and appears headed for production and sale in Europe. VW has hinted that they’ll sell a vehicle in this class before, showing the Taigun concept in 2012 and the T-Roc study in 2014. We’ll see if a subcompact SUV winds up making the swim over here soon.

Volkswagen built its reputation in the United States with the original Beetle, the wildly successful coupe that arguably opened the door for popular foreign-built economy cars in this country. The short-lived Thing (1973–1974 in the U.S.) was probably VW’s first crossover vehicle, and customizers loved to turn the Beetle into Baja Bugs and Dune Buggies. Other than that, VW pretty much avoided the SUV craze until finally bringing the 2003 Touareg to our shores. It shared a platform with the Porsche Cayenne and Audi Q7, but has never offered a third row of seating. The compact crossover vehicle, Tiguan, arrived as a 2009 model, also strictly as a 2-row SUV.

Atlas will be built in the United States.

Atlas will be built in the United States.

Atlas will share factory space with Passat at Volkswagen’s Chattanooga Assembly Plant in Chattanooga, Tennessee. The factory has been in operation since 2011, and is hailed for its advanced facilities and environmentally friendly design. It was the first automotive factory in the United States to receive Leadership in Energy and Environmental Design (LEED) certification from the U.S. Green Building Council, and the first in the world to be receive Platinum certification. The factory’s assembly, body and paint shops underwent a major expansion, adding 512,886 square feet to accommodate Atlas’ production. VW will add 2,000 jobs to the facility.

The factory in Tennessee has not been without controversy, like everything else VW does these days. Earlier in 2016, it appeared that the United Auto Workers (U.A.W.) union was poised to represent the factory workers, but management changes at VW have clouded the issue.

Atlas is built on the same platform as Golf.

Atlas is built on the same platform as Golf.

Volkswagen’s latest vehicle platform is the Modular Transverse Kit or Modular Transverse Matrix (abbreviated as “MQB,” based on the German nomenclature). A vehicle platform is the underlying skeleton and engineering design of a car, a manufacturing standard that makes building a diverse model lineup more efficient and economical. The first VW built based on the MQB is the current-generation Golf. By scaling the platform, the Atlas and Golf can share important layout and engineering details, like powertrain position and angle and electrical format, while still being distinctly different size and class vehicles. Modular design is a key to the MQB’s flexibility. MQB currently underlies Atlas, Golf, Audi A3 and some other European VW Group offerings, and has the potential to be used for many more vehicles in the future.

Atlas is the second Volkswagen to feature standard LED headlights.

Atlas is the second Volkswagen to feature standard LED headlights.

LED headlights use arrays of light emitting diodes to produce light. The earliest headlights were gas lamps – kind of ineffective and dangerous. Lighting technology then developed to use light bulbs - first incandescent tungsten bulbs, then halogen or xenon units. LED lighting requires less power than previous technologies. LED systems weigh less than xenon, last much longer and are less susceptible to damage from vibration. The lighting output from an LED can be tuned to produce bright light in a wide range of color temperatures, and produce less heat than older headlights.

Atlas will come with a choice of two powertrains.

Atlas will come with a choice of two powertrains.

Two choices of powertrain will be available for Atlas at launch: A turbocharged 2.0-liter direct gasoline injection TSI 4-cylinder engine, and a 3.6-liter VR6 gasoline engine. The 2.0T will be tuned to produce 238 hp, while the VR6 can put out up to 280 hp. Both engines will use the same 8-speed automatic transmission. Standard configuration will be front-wheel drive. Volkswagen’s 4Motion all-wheel drive will be available with the VR6-equipped Atlas. A Driving Mode Selection feature on VR6 4Motion models will let drivers match performance to road conditions.

No fuel economy figures have been released yet. They will accompany the vehicle’s official release in early 2017.

Volkswagen doesn’t have a minivan in the US lineup right now, so Atlas is the brand’s designated family-hauler. They’ve made sure that the third row is easily accessible, and have included a desirable convenience feature to make things even better. The second row can fold and move out of the way to let passengers get into the third row, without the necessity to remove a second row child seat if one is installed. Parents will love this feature, which we’ve only seen on a few minivans so far, like the Chrysler Pacifica. As we get a chance to climb in and around the Atlas, we expect to see other minivan-like conveniences scattered around the cabin.

The Trickle-Down Theory may not hold much weight in politics, but it certainly works in automotive packaging. New technology debuts in premium luxury vehicles, and then trickles down to popular vehicles as it becomes more reliable and accepted (not to mention cheaper to make and install). Atlas will be available with adaptive cruise control, forward collision warning and autonomous emergency braking (front assist), blind spot monitor with rear cross traffic alert, lane departure warning, and parking steering assistant. In addition, Atlas can also be equipped with VW’s Automatic Post-Collision Braking System. This system applies “the brakes when a primary collision is detected by the airbag sensors, thus helping reduce residual kinetic energy and, in turn, the chance of additional damage,” according to VW’s press materials.

Atlas will compete with a host of other midsize crossovers.

Atlas will compete with a host of other midsize crossovers.

Atlas is jumping into a well-established field of serious competitors in the midsize 7-passenger crossover and SUV field. The Ford Explorer is the current sales leader in the class, followed by the Jeep Grand Cherokee, Toyota Highlander, Hyundai Santa Fe, Honda Pilot, Chevrolet Traverse, GMC Acadia, Nissan Pathfinder, Dodge Durango, Buick Enclave, Ford Flex and Mazda CX-9. There are also numerous luxury examples of the 7-passenger crossover. Even though Atlas is not in the same class, it will definitely be competing for buyers with traditional minivans, and even large 3-row SUVs like the Chevrolet Suburban, Toyota Sequoia and Nissan Armada.

Pricing has not yet been announced for the 2018 Atlas. Volkswagen says that we should expect “a price designed to draw customers’ attention in the family SUV segment.”

Atlas follows in the footsteps of the VW Bus.

Atlas follows in the footsteps of the VW Bus.

We can’t talk about family transportation and Volkswagen without thinking about the VW Type 2, what we in the US called “The Bus.” Introduced in 1950, it was a rear-engine/rear-wheel drive van, with two front doors, a sliding side door and a liftgate. The original Kombi Van (as it was known in German) came with three rows of seating. The first row of seating was above the front wheels, which placed the controls (steering wheel, pedals and gearshift) in front of the wheels for a “forward control” layout. Deemed the “Microbus” by the hippies in the 1960s, the VW Bus became a symbol of a certain kind of lifestyle, and even starred in a major motion picture, "Little Miss Sunshine." 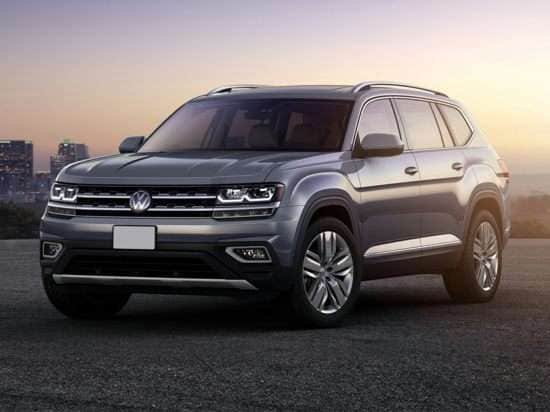 10 Things You Should Know About the Volkswagen Atlas